12 or 20 questions: with Stephen Brockwell 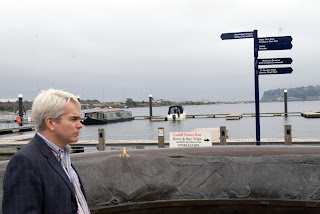 My father told me never to take the easy way out of anything, but I'm no longer sure that's sage advice. Anyway, I think he really meant always take the hardest possible path to everything.

I hesitate to say it but Michael Harris gave me good advice when I was starting out: editors and reviewers will accept or reject your poems for reasons that may have very little to do with the merits of your work; acceptance doesn't mean a poem has value; rejection doesn't mean a poem is worthless.

Peter van Toorn told me to wait for "the long wave," a surfing analogy, no doubt, for not scratching down every poem the wind stirs up.

Finally, I admire Keats' empathy: “if a Sparrow come before my Window I take part in its existince (sic) and pick about the Gravel.”
9 - How easy has it been for you to move between genres (poetry to non-fiction)? What do you see as the appeal?
I can't write non-fiction to save my life. I recently ghost-wrote an article about an information system for a power company in Ohio. There wasn't a memorable sentence in 2000 words. Which seemed to please the client since the facts were straight and the article made them look good.
10 - What kind of writing routine do you tend to keep, or do you even have one? How does a typical day (for you) begin?
I refuse routine. A typical day begins with a barking dog, urination and a cup of coffee.
11 - When your writing gets stalled, where do you turn or return for (for lack of a better word) inspiration?
My writing is perpetually stalled. I regularly pour a quart of Homer's Epic 10W40 into my ears.
12 - How does your most recent book compare to your previous work? How does it feel different?
I think that's a question for other people to answer. I will say that The Real Made Up makes me more uncomfortable than any previous book.
13 - David W. McFadden once said that books come from books, but are there any other forms that influence your work, whether nature, music, science or visual art?
Well, if David said what you said he said, he's very sharp, no? There's little need for "other" is there? Most of the things you describe find their way into books. Recently, I've been fascinated by physiology and neurology (which I read about in books). Mathematics has become less and less important for me as a way of approaching poetry. There are a few cryptic allusions in The Real Made Up to the speed of light. Other than poetry, fiction and criticism, I'd have to say that history and politics have caught my attention. Given our deplorable, undemocratic, secretive and obscene domestic political climate, how could they not?
14 - What would you like to do that you haven't yet done?
Feel perfectly relaxed for 24 hours. I don't care by what means. Someone would have to tell me, "Mr. Brockwell, you have now experienced 24 hours of complete relaxation," because I don't think I would recognize it.
15 - If you could pick any other occupation to attempt, what would it be? Or, alternately, what do you think you would have ended up doing had younot been a writer?
I'm not sure what you mean. My occupation is something like "information technology consultant." Many poets have said that writing as an occupation is a disaster for the poetry. Wallace Stevens was an insurance executive. WC Williams was a paediatrician. F. R. Scott was a constitutional lawyer. I could not write for a living. I'd be afraid of it. I would seriously consider running a restaurant or building green homes for a living.
16 - What made you write, as opposed to doing something else?
I've written since I was twelve, I think. Blame "The Rhyme of the Ancient Mariner" and Lampman's "November". And 70s progressive rock bands. But I do do somethings else: write java, tweak databases, plan marketing campaigns, draft technical white papers - gawd awful stuff.
17 - What was the last great book you read? What was the last great film?
The Illiad is a great book - I listen to that on my mp3 player every few days. I think that The Collected Poems of Wallace Stevens is a great book. Erin Moure's O Cadoiro. Mark Strand's Man and Camel. Stuart Ross's I Cut My Finger may be the last really enjoyable book I've read. The last great film I watched? The independent Aussie film Little Fish probably.
18 - What are you currently working on?
Three very different things. A book length essay on poetry, geography and thinking. A book of poems about energy. A long poem about an English naval officer imprisoned in the citadel at Quebec before the Treaty of Paris. And a handful of poems that have foisted themselves onto my life.
12 or 20 questions archive
Posted by rob mclennan at 2:59 PM