12 or 20 questions: with John-James Ford 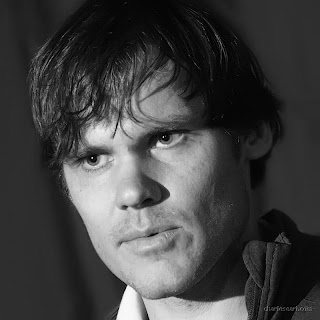 John-James Ford (photo by Charles Earl) was born in Kindersley, Saskatchewan. He studied at the Royal Military College and the University of New Brunswick. John is a Canadian Foreign Service Officer currently posted to Colombo with his wife, Karie, and his children, Jackson and Samia. Bonk on the Head, which was co-winner of the 2006 Ottawa Book Award for fiction, is his major work, and he has recently completed a long poem picaresque entitled Epiphany Season. He was recently awarded a grant scholarship to attend the 2007 Banff Writing Studio, and is presently finishing The Air Inside Us, his second novel. His short fiction and poetry have been published in qwerty, Carousel, Grey Borders, Other Voices, papertiger, stonestone, Yalla, Prairie Fire, SUB-Terrain, and Decalogue 2: ten Ottawa fiction writers (Chaudiere Books).

1 - How did your first book change your life?

It made certain members of my family not talk to me for months because they thought I was writing lies about them. This was my first introduction to the perils of entering the public domain, and how some see certain elements of life accurately portrayed in a story as proof that I must be writing thinly-veiled memoirs. After Bonk on the Head was published and I was travelling across the country in an old VWFox, doing readings to a couple or three people in every city, I had a few soldiers, some of them friends, approach me (the novel is mostly set at Royal Military College, where I studied my undergrad). They would say things like "Dude, I can't believe you took a shit on the Commandant's lawn, that's disgusting!" Otherwise the novel lent a sense of legitimacy to my writing, at least in my own head. I think writers, as a rule, are sensitive beasts, and finally getting that first book professionally bound, especially when browsing a bookstore and coming across it, is a very emotional and gratifying experience. Yes, it has a lot to do with ego, but so what? There are worse things to be driven to do than to manipulate the symbols of the alphabet in such a way that the final product will open the curtains in a new way for another human. It's nice to have someone interested in what you have to say, even if they are asking for a free copy (which many people seem to do).

I've lived in Ottawa most of my life. My dad was RCMP so we moved around a bit when I was a kid but eventually settled in Ottawa, so this is my de facto hometown even though I was born in the prairies. Geography is very important to me, I like my characters to live in a definite place, with concrete landmarks that the both the reader and I can relate to. I have noticed though that I don't usually use a specific place until I'm far away from it, writing somewhere else. For instance I'm presently living in Sri Lanka, and have a story bubbling to the surface that will be set here, but I know that I won't startwriting it until we leave this place about a year from now. I'm not sure why.

3 - Where does a piece of fiction usually begin for you? Are you an author of short pieces that end up combining into a larger project, or are you working on a "book" from the very beginning?

I have active files on different subjects, little folders with insights I have had and collected over the years. (I have recently learned that while insights are powerful and exciting, most of them end up being wrong). When a story comes I never know where it comes from or how long it will be, but I can always tell when a new project has arrived. I then use various old pieces, or insights, as a sort of road map to find my way through the story. It's never the same process twice, though.

4 - Are public readings part of or counter to your creative process?

I don't mind them so much now, but they are in no way connected to my creative process. I hated them when I was in grad school or on my book tour. Generally, I prefer to curl up in a cool, quiet room with a book and a blanket and enjoy it alone, so when I'm reading my own stuff, I tend to assume everyone else feels the same way. But since having children, I have found a genuine joy in reading to others, so much so that I want to write children's stories now.

5 - Do you find the process of working with an outside editor difficult or essential (or both)?

Essential. At a certain point editing seems to get tedious and it's possible to become blinded by the manuscript. I, at least, need an editing hand that I can trust. I had a very positive experience with my editor, and learned more about writing from him than anybody else. He was also my publisher, so he didn't pull any punches because at the end of the day it was his dime.

I'm not sure if this is a skill testing question or if you are just high. Is this a koan? My official answer: "The voice of my flute intones through the orchard."

7 - What is the best piece of advice you've heard (not necessarily given to you directly)?

It's a three-way tie: Tell the truth (my Dad) Tell the hardest truth first (Hemingway, I think) and Be happy (Buddha). (No, it's not trite to say that!)

8 - How easy has it been for you to move between genres (fiction to non-fiction)? What do you see as the appeal?

I don't really write non-fiction. I can't see it happening anytime soon, but you never know. I haven't written much new poetry in a few years and have been sort of hoping it will come back.

9 - What kind of writing routine do you tend to keep, or do you even have one? How does a typical day (for you) begin?

04:00-05:00 meditation, 5:00-6:00 writing, 6:00-6:45 yoga. Then I have breakfast, with the kids if possible, before work. At night I'm generally too bagged to write so that's when I read. My partner Karie gives me much lattitude on the weekends, especially when I have momentum and am finishing a project.

10 - When your writing gets stalled, where do you turn or return for (for lack of a better word) inspiration?

I'll start editing what I've already written to get into the groove. I always listen to music when I write. If I feel really stuck I'll take a journal and go to a public place.

11 - David W. McFadden once said that books come from books, but are there any other forms that influence your work, whether nature, music, science or visual art?

People, especially those I have relationships with. And rock music.

12 - What would you like to do that you haven't yet done?

13 - If you could pick any other occupation to attempt, what would it be? Or, alternately, what do you think you would have ended up doing had you not been a writer?

Well, I'm a full-time civil servant, in the Foreign Service. If I wasn't a writer this would be my dream job so I guess I have no complaints.

14 - What made you write, as opposed to doing something else?
When I was young I realized that I could do it effectively, and I enjoyed it, and I knew the overhead was low, I just needed paper and a pen. Secretly I used to want to be a rock star, but I don't think that's very unique. My first girlfriend told me my poems were beautiful, and I never looked back. Later I realized she was lying, or had bad taste, but it gave me a start. I don't think I'd be writing today if nobody I cared about had ever encouraged me.
15 - What was the last great book you read? What was the last great film?
Last great book is the one I'm reading right now: Birdsong by Sebastian Faulks. It is beautifully written. Incredibly tender. What's a great film? We don't have TV but I'm a Hollywood junkie, for better or worse, and the Bourne Ultimatum was a very entertaining movie.
16 - What are you currently working on?
I'm just finishing my new novel, The Air Inside Us.
12 or 20 questions archive
Posted by rob mclennan at 1:20 PM