From Friday until this Sunday evening Haiku Canada is holding their conference at Carleton University. Ottawa poet Terry Ann Carter is chairing the events.

Long time member of Ottawa's haiku community, Marianne Bluger could be present this year in the form of tulips from her own garden. 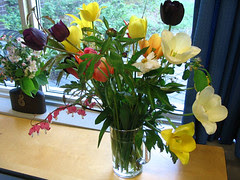 There is a prevailing spirit of camaraderie, with a lot of laughter and conversations as people come from around North America, from Boston and New Jersey, Vancouver to Toronto to Aylmer all for the love of the love of these small form poems. The point was made and taken up on how there is no end point with poetry but it is an ongoing learning of process and language and communication.

Speakers have covered aspects of haiku and other forms, in what constitutes the parameters, the practice, the process and even how it can be used therapeutically. 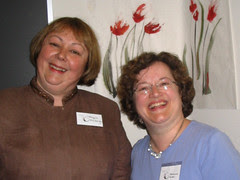 Philomene Kocher and Marjorie Woodbridge talked about the use of sensory stimulation (Snoezelen therapy) using haiku in particular to reach people with disabilitating dementia. It seems to be a doorway to get back to the person through connection to emotions and senses in a way similar to how old familiar music, aphorisms, scripture and ritual, can tap areas of the brain and memory stored in the body. It could bring a person into focus again, communicative. Patients were facilitated to compose haiku by putting phrases they said on flip charts and then collaboratively written. For example

jumping in the puddle
more water in your boots
than out

Haiku and renga has been used in psychotherapy in Japan for years. Philomene Kocher and Marjorie Woodbridge (pictured), of Kingston, presented their findings to St. Paul's University in Ottawa at a conference recently.

Tanka was elaborated on by University of Lethbridge Professor Kozue Uzawa.

Angela Leuck (with Maxianne Berger) had edited Sun Through the Blinds: Montreal Haiku Today (Shoreline Press of Ste-Anne-de-Bellevue, Quebec). On opening night Angela Leuck launched a collection of haiku, Flower Heart (Blue Ginko, 2006) and brought up several readers each to read one of their poems. Her last book, Rose Haiku had contributions from 80 poets and 16 countries, got its start with Tulip Heart inspired by a visit to Ottawa. It was published by Shoreline in 2005.

Abigail Friedman did her first book launch. She talked about writing her book The Haiku Apprentice (from Stone Bridge Books, 2006) and how to start a haiku group with a lot of information cycling around the room from the participants.

She herself got into haiku while working in Japan. She was invited to join a haiku circle and was fascinated by the experience. In telling her husband each time how great it was, to get his reply of "you should write a book about that", she wrote the book never realizing there was a living haiku community in the west.

She has organized a bilingual haiku group in Montreal for 2 years. She explains how that started. "My life has been about doing all these really cool things for all the wrong reasons." After she finished her Haiku Apprentice book the publisher wanted an appendix on how anyone could go out and start a haiku group. She said I've never done it. Give me six months. She started a group and also surveyed every North American contact she could find to pick their brains on how it was done.

insomnia
just me and that cricket
fill the night

Dina E. Cox talked about senryu and pointed out that Senryu was the name of a man who decided to collect the pithy little poems he heard floating about. He collected 2.3 million of them. He started a contest and judged the best ones. He provided a title line and had people form the rest. In 1757 the contest got 207 entries. It ran every 10 days. By 1762 it amassed 10,000 entries. In 1765 the first best of anthology came out of it. One old anonymous poem from Edo was this: 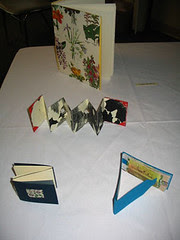 Raffael de Gruttola who founded the Boston Haiku Society in 1987 and is past president of the Haiku Society of America was on hand to give a history of haiku from his years of study and practice. He is pictured here with George Swede. 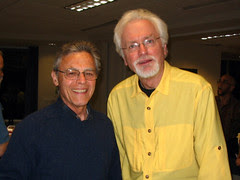 Gruttola made the observation on how hip-hop is not so different from haiku under the surface. How rappers move from phrase to phrase, across surprising gaps and pivots, pushing the language, playing with the old meanings of words to shift the etymology and form language is the same process people are doing with haiku. One is not trying to write the universal poem that 2000 people have already written but sharpen your perception and create awareness in yourself and in others.

Much still to come as the conference continues.
Posted by Pearl at 4:59 PM

Would love to have been there. Just being reading Bill Higginson's account, so have put a link to that, Haiku Canada and this notice on my blog at http://ackworthborn.blogspot.com/2007/06/haiku-canada-conference.html