four words and a quote 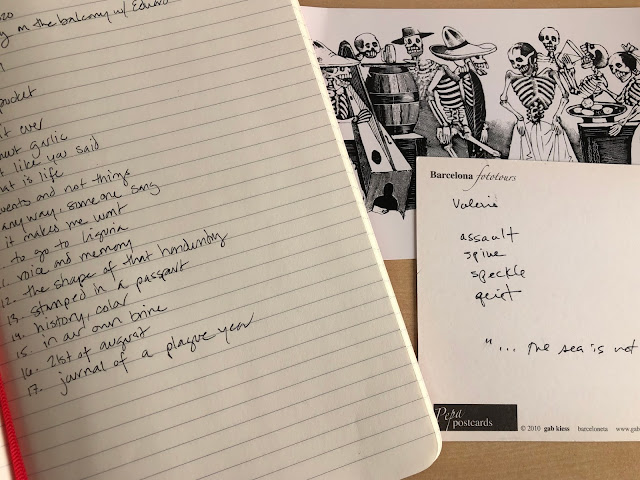 When I started writing with intention, I would go to a café in Berkeley on a Saturday morning for two hours. I would take my notebook and some books that were in play for me, by writers like Kathleen Fraser. I was still living with my then husband but falling deeply in love with my poetry teacher. I would drink a little coffee, swim around in the books, and then, filled up with language, do what I called “dipping the bucket”, which was writing whatever showed up for me for about twenty minutes. Even though I called it “dipping the bucket”, my mental image was more like casting and hauling in a big net of silvery fish. Then I would sort through the fish and make some poems. These I would “type up”, often at work on Monday, and take into the poetry workshop.

Now I have lived in Barcelona for many years with my poetry teacher, who is also my favorite poet, Edward Smallfield. He invented a writing prompt that has served me unfailingly for the last 24 years. It consists of a personalized postcard with four words and a quote. He used to pass these out in workshops, and then everyone would write for 15 minutes, with the option to read our pieces aloud if we were so inclined. The writing that came out of this exercise was often astonishing, and sometimes led to book-length projects.

We continue with our postcards every week, in our private two-person Sunday workshop and in the four-person workshop we have with our friends and parentheses co-editors. We also use it, among other prompts, in the generative monthly workshop we teach, and it tends to be everyone’s favorite.

So, a poem often starts for me with a postcard. It might seem to be the image that sparks something, or the words/quote, but my sense is that it’s really the tension between the elements that makes something happen. Sometimes even the postcard fine print is important. Sometimes I use all the words, sometimes none of them. Whatever happens, though, feels like it couldn’t have happened if I’d simply sat down to write.

Here’s an example from our Sunday workshop on August 2nd.  The postcard was of a woodcut by José Guadalupe Posada titled “Gran Fandango y Francachela de todas las Calaveras” The words were: sweet, battle, smoke and clatter. The quote was “we’re all dead men conversing with dead men”. Here’s the first poem that came from this:

the sea is not our home
someone sang
a floor of monsters
in the mind
something speckled, adrift
spine without body
swimming to nowhere 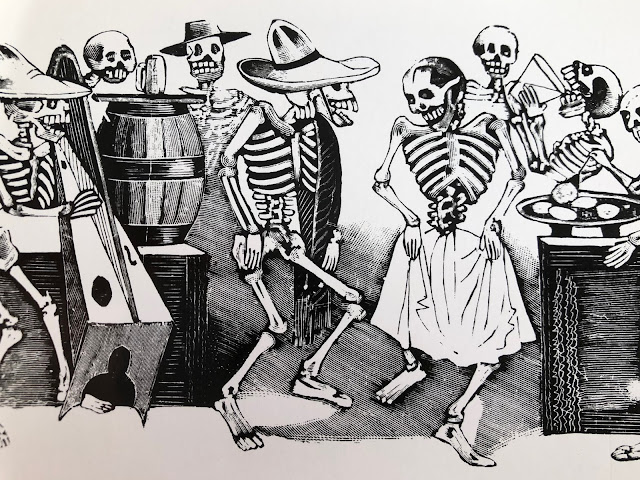 As I’d been inspired mainly by the image up to this point, I decided to make another pass, trying to use all the words this time:

So, what happens to these “postcard poems”? Sometimes they’re stand-alone pieces, sometimes the beginning of a conscious series, and sometimes the beginning of an unconscious series whose pattern and coherence emerge over time. Lately I’m aware of new strands coming into my poems, different voices, memories, dreams and fears. I notice once again that whatever the prompt, the work is always my work, a product of whatever is under the surface waiting to be brought to shore. 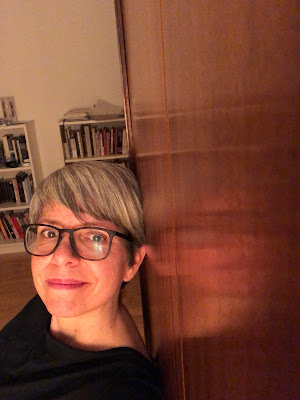