The blackness of my notebooks, large and small, on my desk directly behind my laptop. Not many; the earliest dates back to 1983.  There are others – collaged journals in three-ring binders that parallel twenty years of the making of these black ones (and one blue intruder), and an early set of notebooks (also black) – but they don’t count, here. These are the ones that matter, and they sit here on my desk not out of nostalgia, but because I still use them. They are still eminently utile.

It might be reasonably expected that I jot down drafts of poems in them, early jabs at a constellation of words. But maybe I’m not reasonable, because I don’t. I write on my laptop (and before it, my typewriter), needing, as Charles Olson explicated in his essay “Projective Verse,’ the visual organization of text. I guess I’m a modernist that way.

Anyway, my notebooks don’t comprise drafts. They comprise individual lines, an ongoing accumulation thereof. Some explanation of what I mean is in order.

By the late 1970s, my writing had become, let us say, “constipated.” In my poetry I sought to distil things down to their essence, to the diamond at the compressed end of carbon. The extraneous (or so I thought it to be) was hewed away, leaving, well, leaving not very damn much. Alas, not so much diamond as constipated turd.

It was a dead end, and I began to realize it. So under the sway of Brion Gysin and William S. Burroughs, whom I’d been intensely reading, I began to experiment with the cut-up. I used newspaper articles about the oil crisis of 1979 (in the midst of which I drove a friend to Pittsburgh, returning to Canada via Windsor and damn near running out of gas before I crossed the border) that I cut into small rectangles and glued to large sheets of cardboard. I didn’t transcribe exactly what I found there, but close enough. Wrote some prose pieces, some of which was published, and began to ponder what I was doing, whether or not this was a possible way forward. The cut-up as I was working with it was a bit awkward and laborious, and while I was deeply interested in how it wonderfully skewed things and opened up entirely new vistas, I wondered how it might be managed differently.

I remember, during that time, mis-reading something in a magazine and finding it hilarious. When I thought about it after the laughter subsided, I realized that it was also very useful. Mis-readings, mis-hearings – those moments when meaning slips about accidentally, bumps headlong into preconception and expectation, then heads off entirely elsewhere…. THIS was useful and interesting stuff. My first major literary influence had been the work of the French Surrealists, so I incorporated free-association into the mix, and began writing stuff in my notebooks as it emerged or as I encountered it. There was no attempt made to link individual thoughts that were transcribed as lines in my notebook, no attempt at that kind of coherence  - no attempt, in other words, at poetry, no imposition of any kind of narrative. It was (and still is) a dissociative  free-for-all. Randomness and chance are fecund and generative of the new (so I found great sympathy with, and encouragement from, Nobel laureate Jacques Monod’s Chance and Necessity: An Essay on the Natural Philosophy of Modern Biology).

So chance became my poetics; it set me free, liberated me from the overbearing tyranny of my ego, from the narratives my mind would be determined to set into words. Rarely, now, do I sit down to write a poem with something in mind (and if I do, they mostly turn out like crap). Instead, I turn to one of my notebooks, leafing through the pages looking for a line that catches, that resonates, and this I set down, finding another somewhere else that catches and resonates with the former and setting it down… Get where I’m headed? Okay, then. Just so you know: I hope I never do. The poetics of chance, of the accident, of a very real form of abandonment, leads me forward now. Poems are always surprises, not just semantic templates of some conscious thought, transcriptions of what’s kicking around in my head. I’m really not that interesting, and anyway, my life or thoughts really aren’t anyone else’s business. Oh, occasionally poems crop up that are telling of slight aspects of my life, but they’re rare and infrequent.

Good. I prefer the accidental. I’ll stick with that. 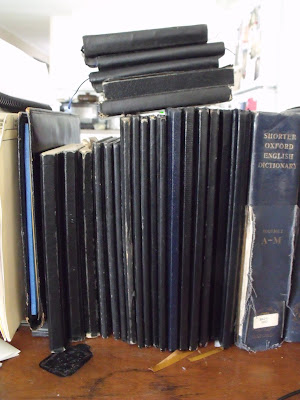 Gil McElroy is a poet and artist living in Colborne, Ontario. His most recent book, Long Division, will be published by University of Calgary Press in 2020.