The window by the bed is open. The morning noise—children and cars in the courtyard— bubbles up to the woman’s tiny fourth-floor apartment, but this is her day off and she sleeps through it. The sheets are splayed around her on the bed. She buys the thin white linens because they are cheap and easy to bleach. Under the dark mess of her hair, something glistens on the pillowcase. Viscous letters shimmer; a sheen of modest emerald. A word. Kiln. The secretion oozes from her ear while she dreams. She wakes, touches cold mucus stuck to her lobe; alarmed, she calls her doctor from her bed. He tells her he can see her tomorrow, and bring the pillowcase! She hangs it to dry on the line that extends over the courtyard from her smoking balcony. The word congeals. Neighbours look up as they pass it flapping and sparkling in the sun. Some take pictures. The next day, a second dream has eked out its alphabetic form. Grasp. The snaky text is the colour of taillights at dusk. She takes down yesterday’s pillowcase, pins this new one up. The doctor can’t explain the phenomenon, but he assures her she is healthy. Each following morning, there’s a new word. She buys more pillowcases. The landlord knocks. Someone’s inquired about her art. They want to buy one. A pillowcase? Yes. She starts selling them from her home. She organizes a show at the café in her neighbourhood. Her pillowcases sell out. An agent calls her. He thinks she would kill in New York, he’s talking MOMA. Or Miami, Art Basel would scoop her up and he’s talking real cash. She accepts. Why not? She can literally do this in her sleep. The art world erupts with her pillowcases, they want more. Her name becomes international. She flies back and forth to meet with investors and dealers. She quits her job and moves into a spacious and stylish apartment with a king-sized bed and thick downy duvets. There aren’t enough sleep-filled nights to keep up with demand. The agent suggests a retreat: a state-of-the-art sleep clinic in Canada where she can work without disturbance. People would be hired to cook for her, to do her groceries and her laundry. She’s prescribed sleeping pills. They work. She can sleep twenty hours and produce as many as four a day. But now with the medication, they’re coming out like trippy rainbows, no more muted hues. Are they ever gorgeous, says the art world. Her prices keep rising, she’s making bank. There she is. She’s snoring. The window by her bed is closed, the air is still and slightly stale. The blackout curtains fulfill their purpose, you can’t see anything in there.
~

Fifteen years ago I read a poem online—dreams leaking onto pillow—and reimagined it as a short story for an English class. I don’t remember the title of the original poem or who wrote it, though I’ve searched for it multiple times. My tenth-grade story is also MIA. I wrote a much longer version from memory a couple years ago, presently archived on an external hard drive plastered with glittery kitty stickers. And now, because I 'd rather write another go at a mini-iteration than sift through archived files, I’ve recast once again.

The appeal of that idea—milky confusion curdling into words—is undeniable. Type and rearrange and delete and type some more and watch as thoughts crest on the screen. Ever try watching your thoughts in the mirror? Spend a minute looking at your face sometime. Think of ham sandwiches; serial killing; the way trauma flattens your past, present and future. Emotions are there in plain sight, but the thoughts fail to surface, fail to become visible. You can speak what’s on your mind, but each utterance flutters away.

I wrote poems to pull myself inside out, to give myself a body that made sense to me. We’re all red inside, but as writers we get to craft a literary skin. We can teach ourselves to feel, to touch.  The body of work is a membrane that grants us access to a community of others. 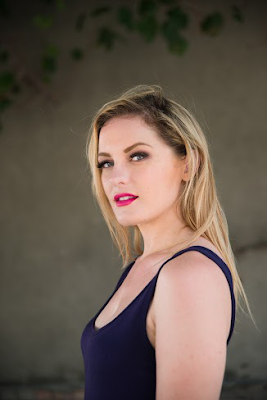 Margo LaPierre writes poetry and edits fiction. Her poetry collection Washing Off the Raccoon Eyes was published by Guernica Editions in 2017. She lives in Ottawa.

Email ThisBlogThis!Share to TwitterShare to FacebookShare to Pinterest
Labels: Margo LaPierre, On writing