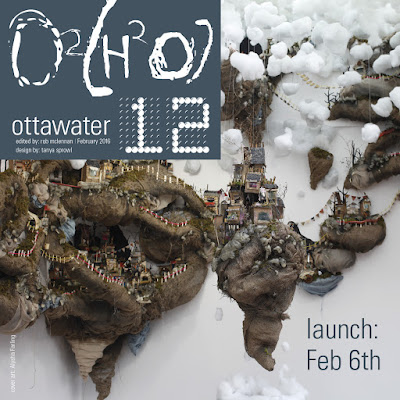 Come out to the launch (featuring readings by a number of this issue's contributors) on Saturday, February 6, upstairs at The Carleton Tavern, Parkdale at Armstrong; doors 7pm, reading 7:30pm. Lovingly hosted by rob mclennan.

Founded to celebrate the 150th anniversary of the City of Ottawa, Canada's glorious capital city, "ottawater," and its chemical formula/logo "O2(H2O)," is a poetry annual produced exclusively on-line, in both readable and printable pdf formats, and found at http://www.ottawater.com. An anthology focusing on Ottawa poets and poetics, its first issue appeared in January 2005, 150 years after old Bytown became the City of Ottawa.

All previous issues remain archived on the site as well. Thanks to designer Tanya Sprowl, the ottawa international writers festival, and Randy Woods at non-linear creations for their continuing support.