It’s that image, isn’t it? That picture in your head that forms crystal clear. The characters gathered together or apart, thinking or talking or fighting or making love or dying. So close you can see the hairs quiver inside his nose. So close you can feel the heat coming off of her. You can smell his body odour –  a not unpleasant garlic from last night’s dinner. You can sense she is about to pinch you. And then the words form, after the image, the words that capture the image. They don’t work at first, you struggle to get them on the page, but then they come quickly, they flow like a river, rushing over your fingers as you type. Sometimes you can’t keep up. That image, you follow it, watch it, move with it, turn your head to see it, you listen carefully. And then you turn it into words and sentences, into dialogue and laughter and chatter, into screaming rage and howling wind. When they talk quickly, back and forth, it’s like tennis sped up and you duck catching the volleys, often missing the volleys. Save that for editing. Because editing isn’t only taking out, it’s putting in, structuring, moving around, misplacing, and finding again. Words. Images. Scenes. Sentences. Letters. Add an “s” and everything changes. Change the tense and the world shifts.

It’s funny that the image is clearer some days. Other days it’s milky or blurry or watery. You see through a veil. Once in awhile it’s in Technicolor and you know exactly what is happening and keep track of it all, even that blown piece of litter heading down the street when your character turns to leave her mother at the edge of the park. You see both the character and the mother as they walk away, separately, the mother into the dark wilds, park full of pickpockets and murderers and rapists, you see your character moving into the light of the city. And then snow starts to fall and you are cold. How can you see both at the same time? You don’t bother to stop and think about it because if you do, if you for one little minute stop. And think. You’ll be distracted and the image will “poof,” disappear. Go up in smoke, like the character who has left her mother to certain fate, as she walks quickly over a subway grate and the steam rises to meet her.

How do you write? Speak on writing. Write: on writing. Say what you will. You can never fully explain it. There are times you come close – watching TV in your head, following characters as they move, staying with them, watching watching watching. You are a passive participant in this game. But more times than that no one understands. Because how can they understand when you yourself can’t even understand? You teach writing and are stumped by questions. “I find dialogue hard,” she says. “How do you show, don’t tell?” he says. You give them a line or two you’ve picked up from someone else, a line or two that has worked before, that seems to ease their tension, and then you go home and think, “I don’t know how I do it.” And “most of the time I’m not even sure I DO do it.” And when you try to explain even more than the magic disappears for you because you are overthinking it, wondering it, worrying it. You know it’s the same for every writer, and also different. There are no tricks, there is no one piece of advice.

It just happens. It’s that image you see. On good days. Sometimes on bad days. Beautiful people, horrible people, angry people, happy people, sad people. They are solid, standing in front of you, and you just have to reach out somehow, with your mind’s eye, and touch them. You have to get to know them carefully and slowly until they become even more solid, until you can see the back of him as he walks away from you, until you can see the small bits of dandruff on the lapel of his coat, the scuff on the back of the right shoe where he stepped down heavy when he was getting off the streetcar, until you smell his garlic as he walks quietly and carefully into the park following the mother. You know you’ve got him, you see him, when you suddenly feel the itch on his neck before he even reaches up to scratch, when you feel the chill come over the mother who is crying because her daughter wouldn’t walk her home.

On writing. The magic. The beauty.  The  terror of losing it. The horror of presenting it. But then these characters turn back most of the time, as they walk deeper into the park, or into the city, they turn towards you who are scratching and typing and buttoning up your sweater, and they look you in the eye. Solidly. 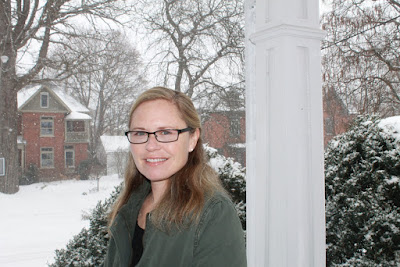 Michelle Berry is the author of three books of short stories, How to Get There  from Here, Margaret Lives in the Basement, and I Still Don't Even Know You (which won the 2011 Mary Scorer Award for Best Book Published by a Manitoba Publisher and was shortlisted for the ReLit Award, 2011), as well as five novels, What We All Want, Blur, Blind Crescent and This Book Will Not Save Your Life (which won the 2010 Colophon Award and was longlisted for the ReLit Award, 2011) and Interference (which has been nominated for the Silver Fachion Award, Nashville, 2015). Her writing has been optioned for film and published in the U.K. with Weidenfeld & Nicholson. She is also co-editor with Natalee Caple of The Notebooks: Interviews and New Fiction from Contemporary Writers – which is based on the famous Paris Review interviews -- and has collaborated on an art book with Winnipeg artist, Andrew Valko, called, Postcard Fictions. Michelle taught creative writing at Ryerson University, was on the board of PEN Canada and the authors’ committee of the Writer's Trust and served as Second Vice-Chair of The Writer's Union.  She presently teaches online for The University of Toronto, in-class at Trent University, and is a mentor at Humber College. She is a contributing reviewer for The Globe and Mail.

Email ThisBlogThis!Share to TwitterShare to FacebookShare to Pinterest
Labels: Michelle Berry, On writing