I Found It at the Movies launches at Black Squirrel Books on Tuesday, October 28

Across the street from the Ottawa International Film Festival’s venue at the Mayfair Theatre, a crew of Ottawa poets will celebrate movies and the movie-going experience with the launch of a new anthology of “film poems” at the Tree Reading Series on Tuesday starting at 8 pm. 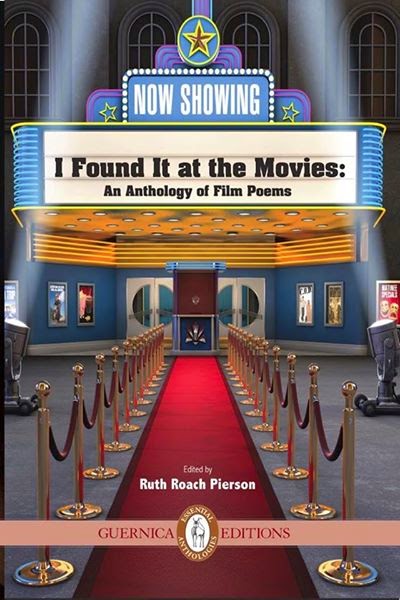 Toronto-based editor Ruth Roach Pierson named her anthology, I Found It at the Movies, as a twist on famous movie-reviewer Pauline Kael’s memoir I Lost It at the Movies, and many of the poems in the book do have the tone and feel of memoir. Nearly all the poems refer to specific movies – like Stephen Heighton’s “2001: An Elegy” and Patrick Warner’s “Apocalypse Now.”  Others – like Margaret Atwood’s “Werewolf Movies” and Kim Addonizio’s “Scary Movies” – address whole genres. Still others concern the special connection audience members feel with the figures on the big screen – like “The Death of Marilyn Monroe” by Sharon Olds and “Love Poem for a Private Dick” by Karen Solie. And not only Hollywood movies fill the dreams of our poets. Ottawa’s Jacqueline Bourque, for instance, takes inspiration from a European source in “Bicycle Thieves” and Phil Hall makes a nod to the avant-garde in “In Memoriam Stan Brakhage (1933-2003.”

Of course, more goes on at the movies than what can been seen on the screen, as witnessed by Ottawa writer Deborah-Anne Tunney in “drive-in 1969” and John Barton’s “After the Movies with O.” As editor Pierson says in her introduction, “movies are part of our common experience,” something that brings us together, culturally, at a time when many forces are at work to divide people and set them against each other. Biblical stories were once the lingua franca of the Western world’s poets; today the mass media, especially films, play a similar role.


The Ottawa launch of I Found It at the Movies, at Black Squirrel Books, on Bank Street just north of Sunnyside, will feature several Ottawa poets reading their pieces from the anthology. In addition to Bourque, Tunney and Hall, local contributors include David Groulx, rob mclennan, Colin Morton, Claudia Coutu Radmore, and Peter Richardson. Editor Ruth Roach Pierson, whose book Aide-Mémoire was short-listed for the Governor-General’s Award in 2008, will also be there to introduce and discuss the anthology and to give a reading from her own celebrated work. It sounds like a night to get up off the couch and mix with the stars of stage, screen and page.
Posted by Colin Morton at 11:46 AM