When I was younger, I used to go fishing. Once, I caught one this big.

I’d shop for lures at the hardware store, jabbing at the gelatinous, stretchy gobs in every shade of neon (like my shoelaces, as this was the ‘80s), mostly careful to avoid the hooks.  I remember eyeing the jigs, trying to imagine what they would look like away from the florescent lights, away from the air and the smell of the key cutting machine and paint and sawdust. Standing there, I’d see them spinning underwater in the kind of warped light I knew from swimming pools, where I’d dare friends to bare-eyed below-the-surface staring contests. I’d wonder if any sock-eyed, steel-mouthed sturgeon would ever fall for them.

Just as a lure designer prepares these creations for terrain alien to his own, so too does a poet engage in an act of translation: precisely seeing the textures and movements of words in both ordinary and extraordinary contexts. The imprecision of language is its joy. Think of how many ways we qualify ‘funny’: funny-sad, funny-strange, funny-stupid, funny-ha ha.

Poetry, like humour, is (name)called subjective: if you don’t like it or get it, it’s not for you. It’s vastly easier to opt out of poetry than to disengage with a mall store clerk. In fact, I’ve been taking notes at the Gap for tips on how advocate strongly in the face of disinterest.

Most poets I know at some point start, “I have an idea for a poem:”

“…I’m going to write about divorce sales on Craigslist—everything half-off. Five hundred for the set, willing to separate the pieces.” Or,

“…I’ve been thinking about an installation piece called “Poetry.” When you walk inside, you’re handed a barista apron, there’s a line out the door, your cell phone starts buzzing and it’s your landlord and your rent is late and your neighbor’s been complaining again about the train of funny people you have over.”

“…I’m working on an installation piece called “Poetry.” When you walk inside, you’re squeezed into a mock turtleneck, feel a crushing and sudden despair, and ardent desire for black coffee and clove cigarettes.”

“…I’m working on something about how shame is the essential part of dating. Looking at your reflection in the mirror to see yourself as someone else might before heading out to meet that person, and having your internal voice taken over by the cable TV lady who narrates side-effect warnings for anti-depressants with names like Uplivia: ‘Side effects of marrying this person may include never knowing how they really feel.’”

These are the things we say to each other.

When I was a graduate student, my roommate Dave Hickey said, “So many of the poets I know are funny. So many of their poems are not.” He’s right. There are lots of poems about the rapture at finding a dead bird, falling out of love, and sunflowers in various states of erectness. But where is the humor? In my own work, I’ve written about laughing and funny bones, about counterfeiters coining funny money, and I’ve included a joke or two in my recent collection, but it’s not something I do often. Instead of having a gag-reflex of one-liners when reality chokes me up, I am gag-conscious: I don’t like myself as much when I fall for cheekiness or clever language games.

There’s an ugliness I see in jokes (along the lines of Hegel’s discussion of subjective humor) that is at ideological odds to the poetic sublime. Also, some of my resistance to writing jokes is well-placed. I used to be in a comedy troupe that performed for children – that’s not a joke – and my co-actors couldn’t always tell when I was intentionally funny or just stumbling into laughs. I can’t even always tell. Jokes make me uncomfortable because they nudge our center of what’s acceptable, a little this way or that, or broaden the circumference of normalcy—all potentially good things—but most operate by disarming our intellect.

The most recent joke at my expense was seeing myself in a dressing room mirror designed to shoot back a taller, skinnier version. “Seeing is believing,” the Uplivia lady reassures.

I hate being the object of practical jokes and surprise parties; I love that National Poetry Month kicks off with April Fool’s Day. My father-in-law is a trove of stories about practical jokes in boarding school. One involves a bear skin rug, a coat rack, and reanimation. Lynne Tillman, a writer and person I am wild about, wrote a fantastic story about a joke called “Dear Ollie,” included in Someday This Will Be Funny. A group of roommates play a dinner party prank that tilts on the edge of going too far. Reading it, I was reminded of sitting with friends around a backyard fire pit a few years ago. Egged on by the summer night, the wood smoke, by nostalgia, we’d all told the usual stories of summer camp gone awry, like wrapping cellophane over the toilet bowl, dropping a sleeping friend’s hand into a bowl of warm water, unleashing a garter snake in the salad. That sort of thing. Someone among us began to tell one that started with all of the usual trappings: there was a cabin, they were young and bored, it was nighttime. The boys, and they were boys at the time, waited until one of their cabin-mates fell asleep. They tackled him and dragged him outside on his bunk mattress. I was sure I knew where this was going. There’d be an outhouse, a wedged door. There’d be a girl, or worse yet, group of girls, waiting for him. There’d be drugs or booze and someone left holding the bag.  Even when you’re certain about where something is going, there’s still a lot of possibilities.

They took the boy, duct taped his hands. Duct taped his mouth. Taped him to the mattress. Carried him to a rowboat, dropped him supine (mattress and all) into its bottom, and pushed it off the dock. He was found the next morning.

Think of him there in that boat for hours.

Does the story change if I add that he was found alive?

I am, in fact, working on a poem about these kinds of concerns called “Stupid funny,” but I haven’t told anyone about it. My draft for “Stupid funny” begins with Wittgenstein’s lecture note from 1946: “If people did not sometimes do silly things, nothing intelligent would ever get done.”

Some of “Stupid funny” is based on a game I’ve been playing for years with my husband where we toss out ideas for skits that belonged in the Monty Python and Saturday Night Live episodes of our youth. Some is based on uncomfortable observations, like the fact that most locker room bodies would be less at home in Porky’s, and more at home in Dick Wolfian morgues.

When I wrap it up, I’m going to get to work on an installation piece called “Poetry.” You go inside and when you come out the person next in line says, “So?” And you are speechless. All you can do is point. And sometimes, rarely, laugh. 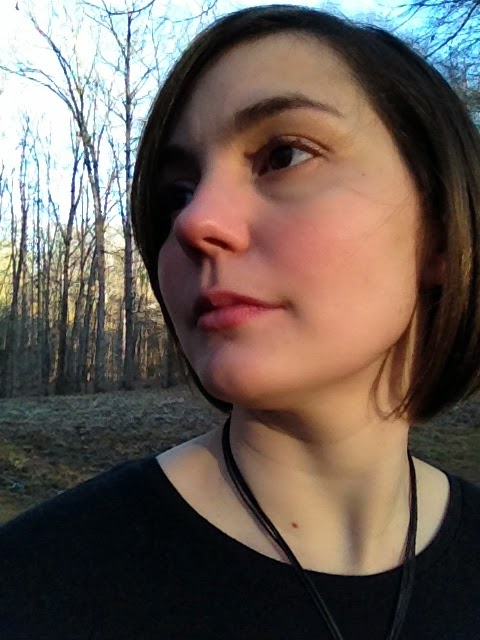 Charmaine Cadeau was born in Toronto, Canada. Her full-length poetry collections include Placeholder (Brick Books, 2013) and What You Used to Wear (Goose Lane, 2004). She is an assistant professor of English at High Point University where she teaches writing and literature. She is the editor of Apogee Magazine, and co-director of the Community Writing Center in High Point.

Email ThisBlogThis!Share to TwitterShare to FacebookShare to Pinterest
Labels: Charmaine Cadeau, On writing