On writing (and not writing)
rob mclennan

I have spent most of the past two decades in daily ritual, waking to immediately sit with notebook, drafts of various works-in-progress, and a mound of reading material. Work comes from the accumulation: the momentums of routine, patience and attention. I do not write in quick bursts but in a succession, even a sequence, of bursts. What I accomplish today is but a segment. Was William Carlos Williams a better poet because he wrote semi-distracted poems onto prescription pads? Was his inattention boiled down to bursts of pure focus?

I attempt to pay attention, but it sometimes overwhelms.

“More things interrupt my work,” Leonard Cohen wrote, slipping into an early poem. Sometimes the interruption is the work itself, requiring a simple break of breath. I step away from my desk to spend a weekend in Toronto, as far away from the comfort of writing as possible. We pack the car and head out, achieving little in the way of work, but a sequence of distracted thoughts.

Some days are Orpheus: I can’t look back, for fear of losing everything.

I attempt to sharpen a book about my late mother, attempt to complete a collection of short stories. I aim for completion somewhere over the next six months; perhaps a year. I am attempting to write about that which I do not yet know.

I sometimes feel in such a hurry I haven’t even time to mention it.

There are days I require to put all aside, and simply read. These are becoming more prominent. These are grounding, rejuvenative.  Distractions that do not take away from the work, but instead become the work.

I sit on the back deck and slip into what I wouldn’t have time for, otherwise. Last summer, the eight-hundred-page Richard Brautigan biography. Currently, recent prose works by Ali Smith and Lynn Crosbie. I sit, ignore the pull of the internet or the telephone. There are the squirrels that bounce up the railings, the silence of neighbourhood cats as they prowl. I ignore the collection of unfinished short stories and yet, through distraction, end up composing six pages of notes into a new short story.

“Don Quixote,” the novel that I perpetually hope to return to, once these other two prose projects are completed. I am thinking about the sketches I’ve made so far on my birth mother. I am sketching her into a shape; amorphous, still.

A decade ago, Margaret Christakos and I discussed the importance of wasting time, hours that allow somehow to sort out what might even follow; what we had each hoped for our growing children. Without wasting time, we might otherwise get nothing done. The same trick applies to composition: years I wrote hours on Greyhound, VIA Rail, Air Canada, simply because there was nothing else I could have done. New ideas came quick, and notebooks filled themselves, between drifts off into sleep.

The balance between focused work and distracted else.

Laundry and dishes and recycling: done. A quick wipe of the kitchen counter. Don’t have to worry about the garbage or changing Lemonade’s litter until tomorrow.

Large fiction projects require a deeper attention, away from the flurry of short reviews, essays, poems, poems and poems. I have to shift my focus, sustained for a series of days that turn into weeks, if anything real is to become accomplished.

I stare into the distance, lost in a flurry of thought. Sometimes I roll a line around in my head, shaping a sharpness of phrase before committing to paper.

I’ve done enough to recognize the need for patience. All in good time. 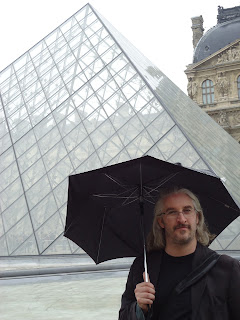 Born in Ottawa, Canada’s glorious capital city, rob mclennan [photo credit: Christine McNair] currently lives in Ottawa. The author of more than twenty trade books of poetry, fiction and non-fiction, he won the John Newlove Poetry Award in 2011, and his most recent titles are the poetry collections Songs for little sleep, (Obvious Epiphanies, 2012), grief notes: (BlazeVOX [books], 2012), A (short) history of l. (BuschekBooks, 2011), Glengarry (Talonbooks, 2011) and kate street (Moira, 2011), and a second novel, missing persons (2009). A new work of fiction, The Uncertainty Principle: stories, (Chaudiere Books) will be out sometime this winter. An editor and publisher, he runs above/ground press, Chaudiere Books (with Jennifer Mulligan), The Garneau Review, seventeen seconds: a journal of poetry and poetics and the Ottawa poetry pdf annual ottawater. He spent the 2007-8 academic year in Edmonton as writer-in-residence at the University of Alberta, and regularly posts reviews, essays, interviews and other notices at robmclennan.blogspot.com
Posted by rob mclennan at 1:20 PM

Email ThisBlogThis!Share to TwitterShare to FacebookShare to Pinterest
Labels: On writing, rob mclennan