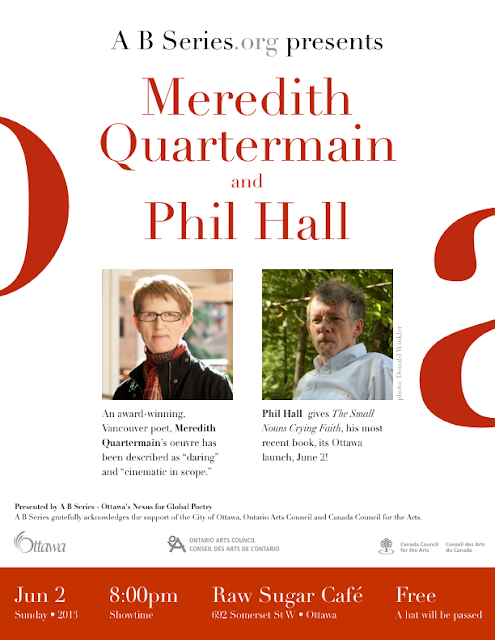 Hall was the 2011 winner of the Governor General’s Literary Award for Poetry in English for his book of essay-poems, Killdeer. In 2012, Killdeer also won Ontario’s Trillium Book Award, an Alcuin Design Award, and was nominated for the Griffin Poetry Prize. He has taught writing and literature at York University, Ryerson University, Seneca College, George Brown College and elsewhere. Currently, he offers a manuscript mentoring service for the Toronto New School of Writing. Hall has recently been writer-in-residence at Queens University & the University of Windsor. In fall 2013 he will be an instructor at the Banff Cenre for the Arts, in the Wired Writing Program.

Meredith Quartermain is a poet of the city, often compared to George Bowering and Daphne Marlatt. Critics have called her a "spellbinding phrasemaker" whose poetry is "daring," "cinematic in scope" and "fearlessly droll." Her books include Vancouver Walking, winner of a BC Book Award for poetry; Recipes from the Red Planet, a BC Book Award finalist; and Nightmarker, a Vancouver Book Award finalist. Last fall she served as the Vancouver Public Library Writer in Residence, leading workshops in songwriting, and writing about places. This fall her first novel Rupert's Land will be published.