Kapotasana is the deepest backbend in the second series of Ashtanga yoga. In this posture, the practitioner comes to her knees, bends backwards, grabs her heels with her palms, places her head between her feet, and presses her forearms to the floor. Her spine is a perfect semi-circle, like a rainbow, and she breathes five breaths, then takes her hands to the floor, straightens her arms, and breathes five more.

Kapotasana is notorious for digging into a practitioner’s messy emotional and psychic closet, as well shifting open the heart and rebending the thoracic spine. I’ve been stuck at this posture for 14 months, and my teacher won’t give me the next one. Currently, my lower back is impinged, my glutes strangely tight, all the progress of the past year seemingly for nought. My spine is a warped table, my breath shallow.

Some days, I hate yoga.

But the move across the country for grad school, from Calgary to Montreal, precipitated something strange, something apocalyptic: writing, which was once so easy and spontaneous, became impossible.

So I sought comfort and found solace, first in a series of dive bars, and finally in a dimly lit inferno located next door to a famous smoked meat restaurant on the Main (I will forever associate hot yoga with brisket). Eventually, slowly, as my body became stronger and more flexible, my novel, in the hours spent outside that tropical oven, also took shape. I wrote sporadically. Scenes dribbled out. The work was more painful than the twisting, bending, lifting, sweating, grunting I performed during class. But I finished the project, defended it, and got my degree.

After grad school, I left Montreal, returned to Calgary, and began practicing Ashtanga (I tried every hot yoga studio in the city, but the climate is so dry here, every room felt, at best, tepid). Work life took over. I abandoned any notion of publishing the thesis. I stopped writing. I stopped reading fiction. I practiced yoga and taught ESL and then worked as a Technical Writer.

Ashtanga is ideally practiced in the “Mysore” style (so named for the city in which the founder, Sri K. Pattabhi Jois, taught); this yoga is a self-practice. The teacher instructs students individually, giving adjustments when necessary. Beginners work on memorizing the postures, whose order never changes. Eventually, the student is stopped, having reached a “gateway” posture, one that must be worked through in order to progress in the series: usually one that involves a deep hip or shoulder opening (for me, kapotasana). Some students never progress past the primary series (because it’s damned hard).  Ashtanga yoga is a 6 day a week practice, typically done in the wee hours of the morning. We rest on moon days.

Ashtanga tricks its devotees. On any ordinary day, a student can wake up, go to her mat, and somehow, as if by magic, execute a posture that has eluded her for weeks, months, even years. It feels like an embodied miracle.

Despite my year and a bit of hot yoga, my body was stiff when I started Asthanga. But eventually, I found that I could, in fact, reach forward and touch my toes, that I could bind my hands behind me while in a deep twist, that I could balance on my hands, wrap my feet around my arms, and touch my chin to the floor, that I could drop my body into a backbend and stand up again. I had always imagined that, while I could be strong, I couldn’t be flexible, that my body was essentially untrainable. Daily, I was astounding myself. What else wasn’t true?

I started to write again, just scribbling in a notebook. Short paragraphs, brief images, dreams. I linked them into vignettes and then into stories. I asked “what if…” and characters appeared to me.

Ashtanga forces patience. Hips open when they will, or maybe never as much as we want them to. Progress is not measured by an accumulation of postures, but by what is happening internally, in our minds. Are we calmer? Are we less attached?

The point of the practice isn’t to get more postures. The point of the practice is to practice.
I approach writing differently now: not a short burst of effort that must culminate in a finished product. I play, rewriting scenes in various styles, using various voices. I tease out the characters to see who the story belongs to. I do not plan. I try very hard not to rush. Sometimes characters appear unbidden. Sometimes they elude me for months. Sometimes the story I think I am writing is, in fact, not a story at all but pages and pages of pre-writing that are necessary for the actual story that wants to be written. Sometimes the story seems to write itself, and I watch, like I’m dreaming.

In Asthanga, we talk about the difference between injuries and openings. Injuries occur for various reasons, but in my case, because of impatience (I so badly wanted to bind in half lotus, I torqued my ankles and pulled the ligaments. They healed, over time, but not before I limped through five weeks of India the first time I visited the country). Openings are uncomfortable; they lead to a reorientation of the body: a longer psoas, a stronger spine, a deeper breath. Navigating openings, not panicking, trusting that the body will once again become familiar, this is the important part of practice. Adjusting the postures as needed, being wise, not despairing when a posture that was once so easy becomes impossible. Practicing six suruya namaskar and then resting.

But is a life spent practicing – a craft, an art, a spiritual discipline – a life in which the pinnacle of achievement (a Nobel prize? Enlightenment?) is not reached, a waste? (Because maybe I lied: the point of practicing yoga is to attain Samadhi. It is also to still the fluctuations of the mind. It is also to practice non-attachment. Perhaps these are all related.)

I hope not; I don’t think so. Today I practice, that’s all, and tomorrow I will, too. 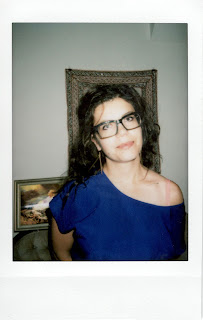 Jani Krulc writes fiction and practices and teaches yoga. Her first collection of short stories, The Jesus Year, was published in 2013. She lives in Calgary with a pomeranian, a cat, and her partner, and is at work on her second book.

Email ThisBlogThis!Share to TwitterShare to FacebookShare to Pinterest
Labels: Jani Krulc, On writing

I love this piece, Jani. The writing, the practice, is the way– you're on it. Bravissima!

And thank you, Mary! Much appreciated :)