People who are curious about a book typically lead with the same question: What is your book about?

Typically I come up with something that is a) overly simplified b) a line of post-considered marketing c) regretful.

Sometimes I think of myself more as a classical composer than a writer. I’m just a composer who quit piano lessons after a year and a half but never gave up reading. When I was young and just starting to read, I read everything. I read so many books. All kinds of books. And the stories and ideas filled me up. I thought that’s what books were for. To convey stories. Ideas. But gradually I began to feel that I had read the books before, that they were, in fact, all the same story, only with different words. Imagine that most of our songs only had one melody, and that only the lyrics changed. Even with the successes that have been achieved in bringing marginalized stories to the fore, the execution still too often traffics in the same colonial structures, the same tropes, the same way of connecting nodes of thought, the same rhythm and cadence, stuck in the echo of a familiar capitalist narrative form.

Part of this is based in causality, linearity, the illusion of time passing. The idea that one action leads to the next and the next is reassuring to us, like the idea of God. It gives life some sort of purpose or meaning, and we seek it out in our fiction. Science argues otherwise, however, that time is not only relative but that the concepts of past and present and future are illusory. Our memories are not a line but a collection of instances existing simultaneously, like the Internet with its hyperlinks that take you from a word in a sentence on one page to some tangential relation.

But the most important part of communicating is in the rhythm of it, the music of it, the energy of it. Ideas are only the most basic level of understanding. Too often, the message gets confused with the art, the message is considered the art. But a message is a statement. Art is less clear than that. It is itself. One might see a message or statement reflected in some aspects of it. But it is always more than that. If I can fiddle with the popular McLuhan expression for a moment, the medium isn’t really the message, nor is the message the message; the execution is the true message.

More often than not when I’m writing I’ll just leave underlined spaces, because I don’t know yet what I want to say, which descriptors I want to use, but I know I need two words in that space. And the first has to be two syllables, say. And the second has to be three. And the stresses have to be on the first syllables of those words and nowhere else. Otherwise it doesn’t sound right. I also don’t typically begin a novel with a story in mind, just a rhythmic pattern I’ve been playing with in my head.

I sense the energy or the rhythms before I have the sentence, for example. Or the paragraph. Or the page or the chapter or the this. I say the this because it’s so clearly different from the that. The that is wrong. The that is something that someone else once did, and it can be copied, which is often the case. Sadly. Too often when I read contemporary fiction I’m reading the that. I have an interesting story, I hear the book telling me. How should I tell it? That is the that. It’s the way you tell a story. In the this, the music and energy are always first. The this is mine. The this is mine all mine. I can, however, sense it, and be carried away by it, in the works of other writers, like William Vollman, or Roberto Bolano, or Mary Robison. Leanne Simpson. To name a few. More often than not, I don’t even remember what happened in a book I’ve truly loved. But I can still feel it, could hum it back. When someone else copies that rhythm, either by quoting a passage directly or just aiming for the feel, I remember it, or recognize it, like a duet that’s been happening since the first author got it right that has simply taken forty years for the second voice to enter.

When I can’t find the rhythm, when I’ve had a particularly awful writing day, I’m also less apt to understand the world. I find myself completely out of synch with existence and am miserable, inconsolable, am unable to interact with others and find the requirement to do so oppressive. At those times, about the only thing that can solve it for me are a good run, wherein I am forced back into a rhythm, or a conversation with either of my sons, 5 and 2, because they are still too young to have been lured by something else, and live within the rhythm at all times.

But when I do, everything is good, and I know I’ve done it right, and I know that other people who are looking for it, listening for it, searching for it… that they will hear it too. 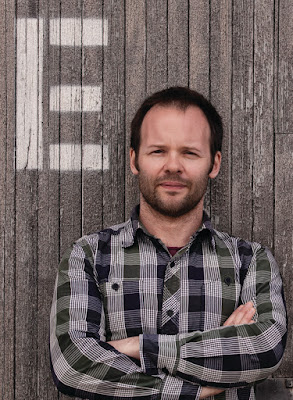 Chris Eaton is a novelist and songwriter/musician. He is the author of three published novels: the inactivist (2003), The Grammar Architect (2006), and Chris Eaton, a Biography (2013), and a retrospective book of short fiction called Letters to Thomas Pynchon (2012). He has also recorded a half dozen CDs under the name Rock Plaza Central, including the critically acclaimed Are We Not Horses? He currently lives in Sackville, New Brunswick, with his wife and two sons. His next novel, tentatively called The Second Mourning of Cole Afcott, is forthcoming in 2017 from BookThug.

Email ThisBlogThis!Share to TwitterShare to FacebookShare to Pinterest
Labels: Chris Eaton, On writing