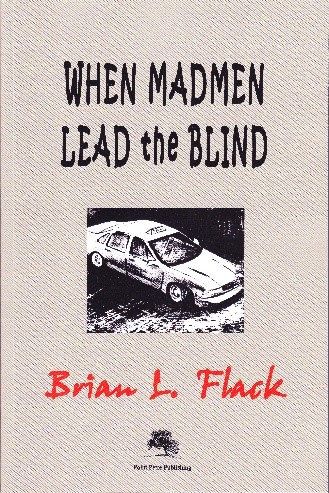 Brian L. Flack is the publisher of Point Petre Publishing. The novels In Seed Time, With A Sudden & Terrible Clarity, and When Madmen Lead the Blind, and a collection of poems -- 36 … Poems -- are among his published works. He is also a contributor to several other books, among them Nino Ricci: Essays on His Works and Discourse and Community: Multidisciplinary Studies of Canadian Culture. He has contributed, over the last 50 years, literary & social criticism to periodicals, and academic journals, and written many reviews for newspapers. For several years, he was the host of a weekly radio programme, “Bookviews”, on Q-107  in Toronto. In another life that he enjoyed for almost 40 years, he was a Professor of English Literature. He is married to the painter Susan Straiton.

Point Petre Publishing (PPP) was established in 2017. It’s designed to be a small operation, publishing only 2 or 3 books a year. What lies behind its existence is the publisher’s understanding of the incredibly difficult time first-time writers have breaking through the bulwarks of mainstream publishing. The deck is stacked and there is not much “give”. The idea was and is to help out in that area as well as publish writers who already have a track record.

Q: How many times have you exhibited at the Ottawa small press fair? How do you find the experience?

PPP has been to the OSPF 3 times over the last 3 years. It’s a fine way to connect with readers and writers. And, of course, sell a few books! The reading at the Carleton on the Friday evening is a highlight.

PPP would have had a new book of poems in time for the Spring Fair, but that was shelved … not because the Fair was cancelled but because of COVID-19. At the time the book would have appeared, every bookstore in the country was closed. The author, an older writer, decided against even trying again in the Fall as her desire to be out and about in the community in the midst of this pandemic was, in the Spring, and remains to this day, less than encouraging … and quite rightfully. As a result, a launch, visits to bookstores, and readings at several venues could not have happened. The book probably won’t see the light of day until the Spring or Fall of 2021 … if then.

PPP is effectively shut down for the time being … at least as far as releasing new titles. The publisher continues to be amenable to receiving manuscripts that will fit PPP’s publishing preferences – poetry and literary fiction, so that when this is virus has been tamed PPP will be able to jump right back into the game. Submissions, though, have slowed to something less than a trickle. PPP suspects that many writers simply do not want to play chicken with this virus and be “out there”. But … prospective authors can still send manuscripts. They should go to PPP’s website (pointpetrepublishing.ca) for submission guidelines.

Bookstores, hurting from the long shutdown have also pared back … they are stocking fewer books than they used to because customers are scarcer and most are not hosting book launches. For the time being, orders of books from the backlist are going to have to sustain PPP. This can be done by e-mail. People can write for a book or books – send an email to pointpetrepublishing @gmail.com or go to the website at pointpetrepublishing.ca where pricing is available – and they will be shipped.

Q: Have you done anything in terms of online or virtual launches since the pandemic began? Have you attendeor participated in others? How are you attempting to connect to the larger literary community?

PPP has had no virtual launches because there have been no new books. Nor has PPP attended any other Fairs. For the moment, PPP does not have much connection to the larger literary community … this is at least partially due to PPP’s remote location in Prince Edward County, Ontario.

It has. PPP’s printer shut down for some time. Suppliers for other materials – paper, ink, etc. – also shut down. As did PPP. Almost everything went on hiatus … except for the internet.

PPP is reading and assessing all manuscripts that come its way, hoping to find a gem or two that can be made ready for publication when the virus emergency comes to an end.

Posted by rob mclennan at 1:00 PM No comments:

On Power Ballads And Poetics

Where does the nesting essence of a poem come from for me? Not sure I really want to pin down an answer seeing as my most favourite poems are the ones where the poem moves in unexpected directions along unexpected pathways. For me, the kernel of an idea that becomes a poem can begin with a title, a simple casual line thrown out like, “Some days my heart is a wolf caught in a steel trap”, or maybe even a piece of music, the opening distorted chords of Joan Jett’s cover of “Crimson and Clover” – Ta Dum Ta Dum Ta Dah!

When I was younger, the form of a poem, the actual nuts and bolts of putting a poem together was a laborious enterprise as I worked in tercets or quatrains. Each line break was scrutinized for its overall aesthetic “look”—and poems slowly took shape. They were an amalgam of image and line. At first, I wrote small lyric poems, and then later densely packed narrative and meditational poems.

Now, I write very quickly and recklessly. The forms I choose are stanza-less, giant block-like passages that river down a page. My line breaks I like to keep as uniform as possible, but I no longer count syllables as I did, say, in my book “Winter Cranes”. The rush of ideas, the quick shoe-horning of surprise, these things are much more important to me now as I began to move away from my childhood autobiographical material into lightly surreal territory. As I wrote in a recent poem, what do you find when you run out of childhood in a poem? The goods.

My poems now feel like love letters to the imaginary world. A world that saves us from the despair and ennui of this one. I love when I can’t keep up with the ideas that are falling through me onto a page. Each line a jumping off point to some new strange “turn” in a poem.

Other poets are still important to me but those writers who influence me have changed over the years. At first, as a poet in my twenties, I was obsessed with Gwendolyn MacEwen and Patrick Lane—and then later Larry Levis, Dave Smith, Jack Gilbert, and Philip Levine—most recently, I have been reading Dean Young, Bob Hicok, and Kim Addonizio. There are many others but these are my seminal influences.

If someone was to look at the whole expanse of my writing, they would see a myriad of layouts and approaches so I’m not sure I have really any fixed definition of “form” in poetry anymore. I like what the American poet Hayden Carruth said about form. Something to the effect that the form of an orange is not just its appearance, but the fruit inside also makes it an orange. I guess I believe that.

I’m all for sturdy beginnings like the opening chords
of Crimson and Clover, the Tommy James original
or the Joan Jett version with its teasing distortion,
the latter bringing me back to Grade Eight dances,
my crush on Natalie Beaudoin who slowly circles me
off in a corner in my thirteenth year, a little too close
in the dark, but now I want to get some EDM into
this next line so I connect a drum machine to a rose
changing Stein’s phrase a rose is a rose is a rave! All
things worth doing are worth doing feverishly. If you
are waiting for the chorus to hit, I am sorry to tell you
this is not a song. Not even close. Yeah.…I’m not
such a sweet thing…. is an invisible button I have
pinned to my chest wherever I go. It’s Friday all day
and phone scammers have only phoned me twice
demanding money for tax evasion. Show me yours,
and I’ll show you mine is my short take on the senses
and the imagination. Pinkie swear. Love, sickness,
English gardens, rocket ships. I’m all in. Totes.
Can you keep a secret? Alright this is a song of sorts.
The verse we have reached is full of star systems
and flight plans. The melody changes the pH levels
in the oceans, and the universe happily claps along.
My day job includes eating bananas, and unspecified
aches in my joints. Getting older is a slow rotisserie
of bills and panic attacks you are forced to eat. At
least the beauty of this world survives as we age,
no matter how much we try to dismantle its allure
with new condo builds and Pay Day loan stores.
Thank-you for the boutonnière. After the dance,
we will go our separate ways but I will take you
home with me, your breath on my neck a little
memento I never told anyone about until now. 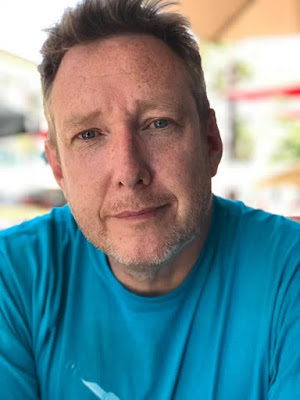 Chris Banks is a Canadian poet and author of five collections of poems, most recently Midlife Action Figure by ECW Press 2019. His first full-length collection, Bonfires, was awarded the Jack Chalmers Award for poetry by the Canadian Authors’ Association in 2004. Bonfires was also a finalist for the Gerald Lampert Award for best first book of poetry in Canada.  His poetry has appeared in The New Quarterly, Arc Magazine, The Antigonish Review, Event, The Malahat Review, GRIFFEL, American Poetry Journal, Prism International, among other publications. His next collection Deep Fake Serenade is forthcoming from Nightwood Editions in the Fall of 2021. He is the poetry editor at The Miramichi Reader. He lives and writes in Waterloo, Ontario.