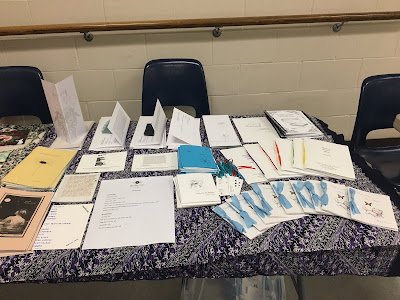 Shortlisted for the 2016 bpNichol Award and winner of the 2013 Diana Brebner Prize, Marilyn Irwin’s work has been published by above/ground press, Apt. 9 Press, Arc Poetry Magazine, bywords.ca, and Puddles of Sky, among others. the day the moon went away is her ninth chapbook. She runs shreeking violet press in Ottawa.

shreeking violet press specializes in hand-made papery things by a variety of emerging and established writers with special consideration given to authors who have historically been at a disadvantage in publishing. 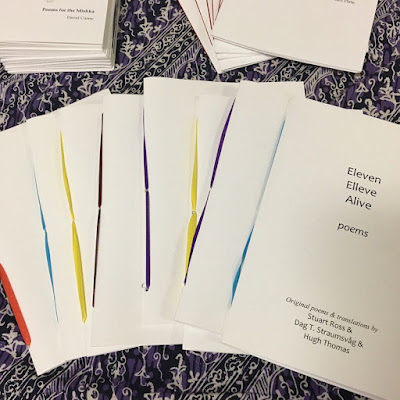 A: shreeking violet press specializes in hand-made papery things by a variety of emerging and established writers with special consideration given to authors who have historically been at a disadvantage in publishing. It began out of desire to make something for a reading I was performing at as part of being named a “Hot Ottawa Voice” by Tree Reading Series in Ottawa in 2014. I used a typewriter and handmade paper and needle and thread and conjured up four little items which I sold that night. Within the next year, I decided I would rather showcase other writers’ voices; soliciting those I admired and wanted to amplify. The first “thing” I made was my first and self-published chapbook “for when you pick daisies” in 2010, but it wasn’t under any press name.

A: My first ottawa small press fair as exhibitor was Spring 2015 and I haven’t missed one so I’ve tabled eleven times for shreeking violet press. Small press people are magical because they’re often making things for little to no profit and, more often than not, with blood, sweat and tears poured into their products. It’s a very encouraging and curious community. It’s dangerous to be surrounded by such coveted, usually limited edition items. You want to snatch everything up that catches your eye and be supportive of everyone’s hard work but you also want to break even. Making trades is a win-win which I often do when presented the option. One of my favourite parts is sitting down for drinks at a pub at the end of the day to swap stories of how everyone’s day went where I get to chat with either new friends or friends who live out of the city and who I only get to see as often as the fair occurs. I highly recommend tabling for people just starting out as it’s a great way to meet the community. 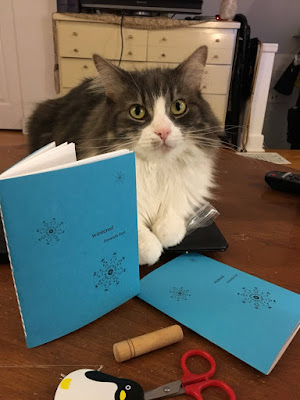 A: I was/am going to be publishing one or two books. The “when” is still uncertain. I’m awaiting final revisions from a mystery author of one of the books and the other book is mine which I still need to edit. I haven’t self-published a book of my own through my own press yet so I thought it might be time. The pandemic has bought us time to sit with our work and neither of us are in a rush to get it out the door by the end of the year so things may defer to next year. It’s a crapshoot at this point, really.

A: When the books are printed, they’ll be available through our Etsy store vs Etsy as well as at the fair. Aside from that, not much else has changed.

A: I have not. I can’t get past how Zooming feels like I’m at work and I’m not one for the spotlight so I’m not interested in hosting or being a visible participant so my camera would be off and I would feel bad for not fully participating so I just haven’t bothered altogether. That’s not to say, I won’t. I think as the colder weeks pass, I’ll be more stir crazy inside and I already miss seeing familiar faces, so, it’s probably inevitable I’ll attend one or even some, at some point. 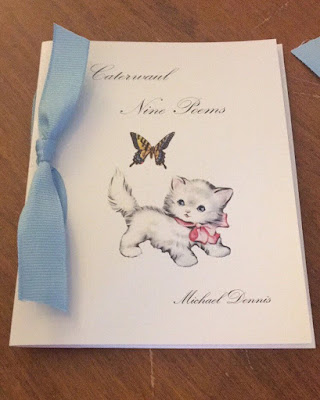 A: I’ve been avoiding stores due to someone in my bubble being immunocompromised and I usually do my shopping for book material in the real world so I’ll either break down and go to stores or find new suppliers online. This has been a contributing factor to not producing anything as yet this year. My printer works out of her house and we’ve always done porch pick-ups/drop offs so that wouldn’t be an issue.

Q: What are your most recent publications? How might people still be able to order copies?

Caterwaul: Nine Poems by Michael Dennis (2019), Eleven Elleve Alive by Stuart Ross, Dag T. Straumsvåg & Hugh Thomas (2018), and Wintered by Amanda Earl (2017) are the latest books hot off the press. These, and all other books and broadsides published by shreeking violet press can be purchased via our Etsy store: https://www.etsy.com/ca/shop/shreekingvioletpress.

Posted by rob mclennan at 1:00 PM No comments:

For the last 12 or so years I’ve walked around with a piece of paper in my right back pocket. Not the same piece of paper, naw, but one that has retained the same characteristics throughout: cheap copy paper, words of mild to severe illegibility wildly schismed up and down the page, sometimes side to side. To say I begin with a loose structure is understating it and most often I start my writing work while walking my dog. In craft interviews I’ve read about other writers’ fear of the blank white page, sitting empty in front of it, mind and body a dullard of one. But with regards to writing poems at least, that’s never been a major issue for me, as I’m normally on the move when writing, not staring at the computer screen, not focused on writing at all. (I also write non-fiction and in the writing of that I have stared, sometimes for hours, at the venomous screen, no worthwhileness appearing anywhere in front of me.)

Although I didn’t realize it when I started writing seriously—a period that directly correlates with my dog ownership—perhaps movement embodies my entire poetics and/or vision of writing. There are exceptions, dozens of them, but I don’t particularly like narrative poems or poems with a staunch beginning/middle/end. I’m not very drawn to epiphany and even revelation can seem forced within the parameters of set lines and stanzas. I know I sound like a negatron, but I don’t really care about fern gullies or fatherhood or fiery rhetoric.

In my own poems at least what I’m mostly trying to get at is a moment and a disappearance, in the way that I’ve seen faces or pieces of graffiti or landscapes appear and then immediately disappear during the course of my walks—and yet those momentary visions somehow stay indelible in my mind, for days, months or years later. It’s an everyday vision that I witness, but via my there-and-gone again-ness it somehow seems unordinary to me, and that’s what I try and write towards—-the sparkling vagaries of the mundane, rendered technicolor in beige and grey.

The below two poems are taken from my 2019 collection Fur Not Light, one inspired by the work of the Russian Absurdists. (If you don’t know them, this book is an amazing start.) Composed between 2014-2018, much of Fur Not Light was written in prose, lineation be damned, but the volume’s opening section is in lines, short ones. Nearly all of that section was written while walking, aimless and attune. With the two poems below I can distinctly remember the composition circumstances. The first was written in the summer of 2015, over the course of three different walks, Monday afternoon, Thursday afternoon, Saturday morning. One stanza that first day, two the second and the last three on the third. (I later went back and revised a bit but the thereness was already there by that point.)

The second was written in the late fall of 2016, at Thanksgiving. I lived in Omaha, NE at the time and was briefly housesitting for my friends John and Rachel in my former hometown of Portland, OR. That poem was a two-walker, with the first two stanzas written on Thanksgiving Day and the next three written two days later. A lyric by Chance the Rapper makes a fleeting appearance in the third stanza too. (I think?)
from “Be Yer Own Hitman (Deathsounds/Lovesongs)”

My past
A winter’s thaw,
Sun intermittently through
Dark cloud.

As then I believed
I owned the air,
Everywhere;
Now succumbed

To my mere rental
Of it,
For a short time,
At a great cost.

(Realizing that under certain circumstances
Even the sunshine
Can be a kind of death
Poem.)

As today I finally study
The meaning of snow,
Of slush. Thick
Mysticisms of snow

Embedded
Within
Some canyon’s
Every pockmark.

And today all is a battlefield
Of sunflowers,
Battlefield able to shout
Without having a mouth.

When did I forget
How to fly?
I didn’t, I didn’t, I won’t.
Where the river bends

Through the trees
I am waiting,
Breathless to grace.
Keep rowing past anyway,

Our stunned copse
Of eye contact
Its own glittering
Bouquet.

When I was younger I thought that poetry was about linguistic triumph. Now I’m of the mind that it involves syllabic darts of rhythm, deeply felt but barely seen or heard. 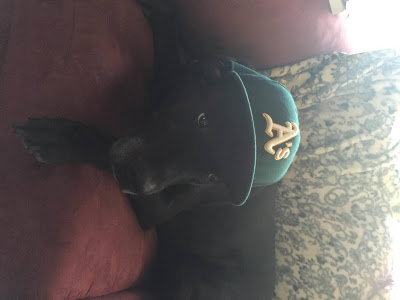 Jeff Alessandrelli is most recently the author of the poetry collection Fur Not Light (Burnside Review Press, 2019). In addition to his own writing Alessandrelli also runs the literary record label/press Fonograf Editions. He’s at https://jeffalessandrelli.net/.
Posted by rob mclennan at 10:00 AM No comments: