I don't know anything about writing. Sorry. I write, but I can’t translate that expertise into any particular set of informed conclusions—might as well ask me to provide insight into the nature of death, given my expertise in mortality. Yes, I’m fated to do this inexorable thing, but that doesn’t mean I’m in total control of the process. No matter how much I think about it, I just don’t know.

The divine origins of writing, now that’s something I know about. Let’s talk about Uruk, the city of cities, and the ascension of Inanna, ruler of writing and all the passionate arts. Or the invention of everything, when God in the Sefer Yetzirah engraves an alphabet on the primordial ether. Or the engendering script of Kali Ma, inscribed on her necklace of skulls. I know for sure writing comes from Prometheus and Thoth and Quetzalcoatl, and you can call upon Ganesha or Cerridwen or Hermes, or conjure angel-scribes and saints of every literary patronage. John the Revelator, him I know. And the Muses. Beatrice. Layla. Neal Cassady.

Writerly advice though? I understand there’s discipline, daily routines, workshops, writing prompts, a productive rapport with editors—but these are inaccessible mysteries to me. Instead, how about that time Odin transformed himself into a snake to steal the Mead of Poetry, and the mead was brewed by murderous dwarves from the blood of a wise man, and Odin drank so much and had to go so bad that he urinated over the whole world and wherever a drop fell into the gaping mouth of a hapless human, a bad poet was born. Theft, backstabbing, drinking, piss-poor results. Ahh, writing. Totally understood.

I know this voice in my head cycles through weeks of insistent dictation and then longer stretches of taunting silence. If I’m lucky, there are some provident fragments dropped into that void, like when you break a glass and step on a sliver months later. You bleed but still feel a sense of accomplishment, having finally collected that fugitive, shining needle. The world is one shard improved.

There’s something diabolic behind the experience—that, I know. The Persian hero Tahmuras demanded the secrets of writing from a defeated army of demons, but more often than not it’s the demons making demands: Garcia Lorca’s duende, or the fame-inducing, life-shortening Leanan Sidhe, or the demon Titivillus endlessly gathering syllables in his infinite black bag, or all the devils of Don Quixote playing tennis in Hell with poorly written books, or the presiding demon who scoffs at writers in general and poets in particular—the one John Keats named when he admitted to Percy Shelley that “an artist must serve Mammon.” Keats died with empty pockets; Shelley died with a pocket full of Keats. Demon overlords are a bitch.

In the absence of riches, it must be the writing itself we serve.  The legendary first settler of Easter Island, Hotu Matua, arrived on the shore with 67 inscribed tablets, and announced that all attempts to read the script were doomed, forever.  It was a great pitch—who wouldn’t want to read his stuff after hearing that? But: he was the first one there. Who was he announcing this to? Why haul this momentous stack of writing to a place without readers?

I don’t know. But I recognize this guy. Compelled, even isolation, to scratch ideas into words; convinced someone might read them, someday; challenging that remote someone to understand. If so, they would overcome doom, together.

They say the moment Cangjie invented writing, grain fell from the sky, and all the gods and ghosts cried. That’s all I know. 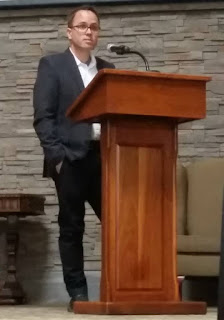 Steven Artelle is a writer living in Ottawa, where he works at Library and Archives Canada.  His first collection of poems, Metropantheon, was published in 2014 by Signature Editions. His poetry has appeared in Literary Review of Canada, Contemporary Verse 2, Prairie Fire, filling Station, Vallum, FreeFall, and in publications by Mansfield Press, AngelHousePress and above/ground press.

Email ThisBlogThis!Share to TwitterShare to FacebookShare to Pinterest
Labels: On writing, Steven Artelle