After Swann by Marthe Reed 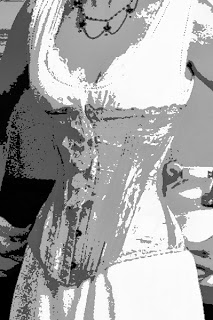 There’s a surprising amount of perspective unifying Marthe Reed’s new chapbook. A collaged piece intertwining Reed’s words with those of Marcel Proust (by way of his Swann’s Way), it’s also an animated video produced in association with the Plastic Theater of Lafayette. And when you consider this above/ground press release appears excerpted from a larger body of work, which (one imagines) will deepen already weighty themes of gender and consciousness, well, there is much to chew on here.

Given all of that context, After Swann surprises because it’s fully transporting on its own. I jumped in as I usually do, obliviously – having read no “product descriptions” in advance – and immediately felt the invisible parameters that directed acceptable female behaviour in an aristocratic setting; constraints that still loom today.

too irresistible
this black cavity
precisely the same

she might have a red
principle
a certain type of femininity

her subjection
fixed in
space

impossible for me
the vagrancy
of her

present except
in a flood of blue light
that current

we imagine
almost ours
that sort of tenderness

the instant of pain
the special pleasure
and seize

the mysterious object
still alive
buried in a couch of grass”

From “21”, Reed’s first chapter, we’re acclimatized to a code of conduct pillowed between Freudian urges and bigoted expectation. Marthe Reed has tackled femininity in a male-oriented society before and here it’s quietly rendered amidst the formality of a Jane Austen-esque estate. There’s always the matter of evening entertainment, of dresses and figurative masks to attend to, while the meadows hang like a dreamscape just over property lines. From “27”:

“her spirited
laughing
a cataract”

Alongside our nameless protagonist, we readers learn to cope within the strictly defined rules that govern a gender and home we had no hand in. After Swann’s gaze tenders no logical reasoning for our plight but no clear remedies either. These stanzas steady themselves on perseverance, never acting on defiance or self-pity. Womanhood, as sculpted by men, becomes a sentence to outlast and yet Reed’s collage engrosses us with its daily tribulations.

Her lines, which rarely exceed four words, huddle in clusters of threes over a dispassionate timeline often fragmented by obligation and excess. Scarcely placed details of these events welcome a share of guesswork while Reed’s lack of punctuation rolls a mental fog over what happened, when, and whether it matters.

After Swann's desensitized outlook cannot be empathized with through a veil of historical follies when femininity remains smothered, to one degree or another, throughout the world. Like any form of ignorance, sexism lowers the human condition and the few cases that make headlines have typically been rooted, unseen and cancerous, for years. In the Somali capital, it might justify treating women like possessions. In the posh office of Canada’s largest university, it may validate depriving students of the opportunity to read women’s voices. Somber truths like these underline the importance of After Swann’s character, which speaks for the speechless through a collagist voice of both sexes. Unless you scour Proust’s text in an attempt to dissect Reed’s patchwork, the voice surviving inequality, one day at a time, is united regardless of gender. That's a comforting thought.

To close, here’s an excerpt from “28”, probably my favourite section, in which Reed and Proust’s psyche savors a moment’s peace away from the charade:

“deep blue tumult of
memory
the fragrance of

without speaking
a woman
a moment”
Posted by Ryan Pratt at 1:08 PM