On the Invention of Language
Abby Paige

Almost two years ago I gave birth to my son, and since then writing — like sleeping, eating, using the telephone, shaving my legs, and everything else I once approached according to need or want or inspiration — has become a disordered exercise in resigning myself to incompletion.

Rabbi Dayna Ruttenberg wrote recently in The New York Times about how she lost her sense of prayer when she became a parent. She eventually recovered it, or revised it, by accepting the “radical amazement” of parenthood as part of her spiritual practice. A prayer might now consist of, “deep contemplation of my 1-year-old’s ear…offered up with intentionality to the divine.” I am still incorporating parenthood into my practice as a poet and writer, and I don’t really know what my writing will be now, in this “after” period. But I cling to my own moments of “radical amazement” — and the radical monotony they punctuate — with the belief that they are making me a better writer and person.

As disciplines, writing and parenting have their affinities. Each has a mythology around it that is not borne out in reality. The reality is that the open expanse of an empty page is not unlike that of a sleepless night; each has to be approached with a kind of faith and disregard for fear. As a writer and a mother, I walk the balance between authority and surrender, savouring my moments of mastery, certain to be humbled swiftly and often. I ride my own enthusiasm for an idea (Today, to the park!) and yet cultivate a willingness to abandon that idea suddenly and completely when it fails. I do my best when I come to the table — to write or to finger-paint — with the intention of learning rather than demonstrating what I know, when I let myself be a channel for something other than my own will. This is a patience, a listening, that both writing and parenting cultivate in me.

Unless you have ever lived with someone who cannot speak it is hard to understand the enormity of this development. How can I convey the experience of ministering to another human being for days and weeks that unfold into months, until a year passes, and then more months, and during that time, ministering and believing that this wholly dependent and completely uncompromising creature is experiencing thoughts, desires, confusion, and delight, the same way one believes that the universe operates on some organizing principle although that principle is entirely invisible? I honoured and respected his needs with as much grace as I could muster (sometimes not much), gratefully aware of how my own needs diminished somehow into inconvenient aches. I was something like a servant, and my son was something like a reclusive master for whom I had been chosen to care but whom I was forbidden from actually knowing. My son’s silence (can I call it silence when much of it was in fact very loud?) was so absolute that for many months with him I felt alone, as though I was caring for his physical form while his actual being was somewhere else. For many months I listened so hard to that silence that I think I heard nothing else. I decided that I could infer his desires with some confidence, even as I acknowledged my confidence as ridiculous. How can I convey what it is, after all that, to see the beginning of expression, to understand that this is where parenting transforms from a silent servitude to the active, awful responsibility of teaching another person how to live in the world? It is like witnessing his birth a second time.

We can’t pinpoint the moment he realizes that things have names, or even the moment he first calls a thing by its name. He gestures and makes sounds, and slowly those gestures and sounds develop a predictability, or we develop an ability to recognize them. Eventually he settles on pointing with an index finger and calling a thing by a name — a wrong name, a mere sound, but he repeats the sound until his father and I obediently accept the sound as the thing’s new name. Cow becomes moo. Horse becomes nee. More becomes moy. Buh means bus; also ball, bubble, boot, bath, and, somewhat whimsically, grandpa. We used to speak English at home, but now we speak some sacred pidgin that has fewer consonants, fewer syllables, more repetition, and pre-determined obsolescence.

We make a list of his first words, which seems to indicate something about the priorities of our household: boom, hi, more, apple, banana, guy. It is an unexpected breakthrough — an innovation — the first time he gives a word intonation. Wow, he sings slowly, his voice rising and falling. The first syllable of Mama is higher than the second if he’s being playful, but lower if his need for me is urgent. The first time he says his own name, half the consonants missing, I recognize it immediately by the electrical jolt that passes through me, a sharp biological response, as if he had said my own name, the name he doesn’t yet know I have.

And then somehow he does know. Abby, he calls from his bed in the morning, or in the middle of the night he cries, I want Abby. I don’t know how he learned my name, but he knows it now, and at first I am shaken by our separateness: it is distinctly weird to be called your name by a thing you once contained.

He commands us to tell him the names of things. He points at things with a teacherly little finger, and if we don’t respond quickly enough, he looks at us as if we were malfunctioning machines. He hisses an inquisitive exhale, Wassa?, and we tell him: Snail, acorn, light. He repeats these sounds — nyayo, coheng, yike — and we are puzzled by our comprehension. Articles, pronouns, and prepositions are all absent, along with most verbs, yet we are usually able to gather his meaning, obey his commands, and in the process we discover that our English was somehow limited before. He expands it by uncovering relationships between words — work and hug; water and wallow; running and raining and Randy. Language seems suddenly, impossibly elastic, loose, free, and way more fun than it’s seemed to me in a long time. I almost regret that he will eventually acquire grammar. I listen to him the way you listen when you’re travelling in a new country with nothing but an out-dated phrase book for company, leaning in, taking nothing for granted. It’s the way I try to listen at a poetry reading, with humility about my knowledge of English, with an expansive sense of what language is. I listen to the sounds and then wait for my brain to connect that sound to all possibilities of meaning. I don’t ask What is he saying?, but What could he be saying? I listen as he experiments with sound as though I am listening to the invention of language, and in a way, that is what I’m listening to.

I used to say that I learned everything I know about English by learning Spanish. My English was given to me, inherited. Although I was an early and avid reader and writer, I was hopeless at English grammar as a student, because I didn’t know anything about how English was made. But my Spanish, I built myself. I had to learn how it worked over the course of years, through use and misuse, and in that process, I discovered the inner workings of my English. My life as a writer has in part been the slow process of perfecting my mother tongue. The more I work with it and understand it as a medium, I discover what it can do and how the version of it that I learned from my parents is unique.

This summer, walking on the beach with another family, while trying to maintain the thread of an adult conversation, we and our friends named our surroundings for our three toddlers. Loon, I said to my son, pointing to a figure bobbing in the black water. (Loon is a word that gives me particular pleasure, and I was pleased to have an occasion to teach it to him.) Our friends are biologists, and their twins toddled up to the water confidently. Their mother pulled a spindly green weed from the wet sand and held it up for them. Algae, one of them announced. This makes me so proud, their father swooned.

It reminded me of something Owen Barfield wrote in his book, Poetic Diction, that “…even the most original poet is obliged to work with words, [which] owe their very substance (“meaning”) to the generations of human beings who have previously used them. No poet, therefore, can be the creator of all the meaning in his poem.”

Lately, when I think about the words I was given, that I am now passing on, I think the only original thing about my writing is me: my ancestry, my upbringing, my influences and interests — everything that has shaped me and the way I use language. Lately I think my writing is just an elaborate effort to reconcile my English with everyone else’s, to record its existence before I go extinct. Like parenthood, a very limited kind of immortality.

I write so that you will know what I mean when I say hospital or box elder or hermit thrush, so you will sense in those words the people who used them before me, the people who taught me to speak, and the people who taught them to speak before. In teaching my son the language I have, I hope he will sense these things, too, know some part of my inner universe and take it with him into the world. I also know that my moment to shape his passion and prejudices is fleeting.  But I hope some night he’ll be lying somewhere half asleep, and he’ll hear a loon cry out to the darkness, and he’ll say aloud to the quiet, loon, and for some reason the sound of word from his own mouth will remind him of how he is connected to all things, and to me, too, and this will give him comfort. 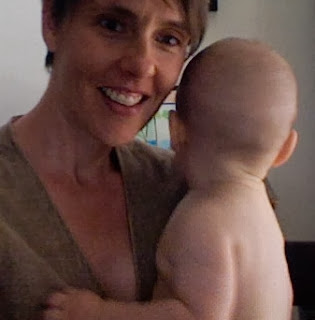 Abby Paige is a writer and performer. Her chapbook, Other Brief Discourses, was published by Ottawa’s above/ground press earlier this year. She lives in Ottawa.
Posted by rob mclennan at 1:34 PM

Email ThisBlogThis!Share to TwitterShare to FacebookShare to Pinterest
Labels: Abby Paige, On writing