Its wings are motionless in the glass— this prehistoric thing almost seems alive, glowing warmly in a translucent orange rock. It’s a photograph someone has sent me online and I can’t keep myself from looking at it, on and off, throughout the day. I have known for a while about fossilized amber, but I’ve never really spent that much time looking this closely. Tree resin that has petrified, turning from sap into stone, and the little hairs, plant tendrils, and skin that are caught in it all carefully preserved. Forever immortalized. It’s fascinating but unsettling, how as the creature becomes aware of its condition, it yanks thin ropes and trails into the gum, the movement seemingly evidence of a fighting. The fossilized amber not only capturing the ending of the thing, but capturing the struggle before the ending. And this really gets me— the idea that the resin captures struggle. Struggle being a thing that resonates so very deeply with me. Something I know intimately as a human being, of course, but even more intimately as a black human being. How that struggle makes a person like fossilized amber, a question. A body congealing into a hypothesis or a kind of magic trick. A way of keeping death, death, while making it look like life.

Amber is, in a way, nature choosing to display what has not escaped / what is weakest / what has failed. And so, fossilized amber almost becomes a kind of monument of failure / of not really succeeding. Some of the best stories, I find, are stories of failure, or underdog stories. Mostly because of the lessons they contain. “Always watch your back.” “Don’t fly too close to the sun.” I love “don’t fly too close to the sun” especially, and the whole story of Icarus, because it’s one of those cautionary tales that doesn’t really seem to work in terms of cautioning anyone. I mean, for all the danger of falling, people still seem to want the feeling of flight. And they still want to be reaching for the sun. People still need to be told not to look directly at the sun, which is amazing. Like when the big eclipse happened, the sun was covered by the moon, but for a few moments. It was a trick and the sun hadn’t gone anywhere. It wasn’t even shielded really, it was still burning, even though it was obscured. This kind of obscuration happens often in fossilized amber. Little bubbles get into the sap and cause clouds as the amber hardens. The term for this kind of cloudy amber is “bastard.” Like to be born of unmarried parents, or to be born without a true mother or father.

When I hear the word bastard, I think Phaethon, a semi-famous Greek hero who was the illegitimate son of Helios (the son of an actual sun). Phaethon’s biggest claim to legend was a story that I consider a pretty interesting depiction of failure. His friends didn’t believe that his father was the sun so Phaethon went to Helios to ask for some kind of proof he could give them. His father told him he was free to ask for anything, so Phaethon decided he wanted to be allowed to drive Helios’ chariot, a vehicle that was supposed to be what carried the sun through the sky. His father didn’t think this was a good idea, but Phaethon begged, so Helios agreed. When Phaethon drove the chariot, the horses didn’t feel his father’s weight and thought the chariot was empty. They went wild. Phaethon became frightened and dropped the reins and the horses went off course. They flew too close to the earth and scorched the ground. The place they scorched supposed to be what is now known as Africa. Their heat is also supposed to be responsible for black skin. Because Phaethon was causing too much destruction on earth, Zeus (father of the gods) had to intervene. He struck Phaethon with a lightning bolt and Phaethon’s burning body fell to the ground. His sisters, when they heard about his death, apparently became so sad that they turned into poplar trees and cried tears of amber. What I find the most interesting about the myth is not really the connections to Icarus, of sons not listening to their father’s, or flying too close or too high or too low. No, what I find most interesting in the myth is the idea of blackening. The myth attempting to explain the creation of black skin and (in a set of images I can’t seem to get out of my mind), providing dual scenes of a father holding his smoldering, black child. Holding his son who had just minutes earlier been striving for something amazing. “the feeling / you get when you are looking / at your child, turn your head, / then, poof, no more child. / that feeling. that’s black.”[1] How there is something about blackness that has always been, in this way, a becoming / an arriving / a not quite yet. And how this striving seems as closely tied to blackness as anything else. The going after something that is deemed higher— further. The moving beyond a position of simply being. And how this sense of struggle is known to us, at the very root of our doing. That as black bodies, we have long sought flight.

Or that as black bodies, we have long sought. 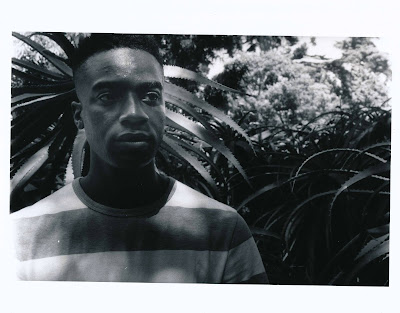 Fisayo Adeyeye has works published in Noble / Gas Qtrly, Nailed Magazine, The Birds We Piled Loosely, Print Oriented Bastards, New American Writing, This Magazine, and others. He is the former Poetry Editor of Fourteen Hills, a former Co-Curator of the VelRo Graduate Reading Series. He is the author of Cradles (Nomadic Press).
Posted by rob mclennan at 10:03 AM

Email ThisBlogThis!Share to TwitterShare to FacebookShare to Pinterest
Labels: Fisayo Adeyeye, On writing

This is beautiful. Thank you.