There’s an illustrious tradition of poets dying in bed. By illustrious, I mean it’s well documented by Google Images.

Lord Byron with his virility covered by a thin sheet, one arm languishing in defeat.

Severn’s sketch of John Keats, sleep-dying upon his surprisingly white pillow. He’d been coughing apart his lungs for years.

Sergei Yesenin in his striped suspenders, resembling a scared little boy. There was no ink in his hotel room. He wrote his last poem in blood.

Of course, these examples are all men. It would be fascinating to delve into why there are no iconic final images of Sylvia Plath, Anne Sexton, Nelly Arcan, or Alejandra Pizarnik. But that’s for another essay.

Back in April, I was diagnosed with a terminal illness. Think of it as modern TB, if you want. But it’s rare and the speed of my prognosis is still uncertain.

Inevitably, some day in the future, I’ll be one of those dying poets who writes from bed.

I already am to a certain extent. I recently had to quit an office job, because desk chairs kept popping my ovarian cysts. This is living out Johanna Hedva’s Sick Woman Theory and it’s not fun.

At 27, none of my fiscal years have risen above the poverty line.

That statement is more factual than complaining. The main perk of writing has always been its affordability. I’ve sacrificed a lot of luxuries for groceries, prescriptions, and being able to (almost) pay my bills. Many more writers do the same.

Writing is a staple in my routine, because I only need my laptop and allocated space.

Other poets have asked if I wrote during the period leading up to my LAM diagnosis. After all, there was a 5-month lapse between that first ER visit and the final verdict, filled with invasive and less-invasive medical tests.

Writing helped with the coping and not-coping of that.

Without any irony, writing is a conversation with myself. It’s a method for speeding up the grieving process, coming to terms with my new reality, and continuing to move along.

It’s radical self-validation and keeps my inner worlds thriving, even when the future threatens to force me back into bed. 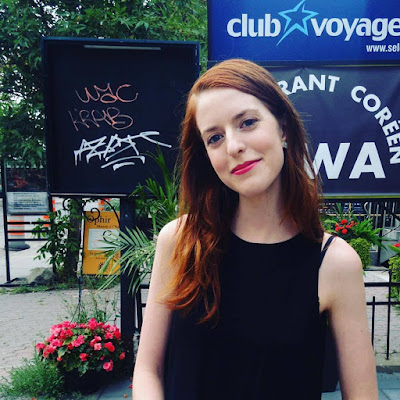 Lauren Turner wrote the chapbook We’re Not Going to Do Better Next Time (Knife Fork Book, 2018). Her writing appears, or is forthcoming, in Arc Magazine, Minola Review, Cosmonauts Avenue, Carte Blanche, Bad Nudes, Peach Mag, and elsewhere. She lives in Montréal, Québec on the traditional and unceded territory of the Kanien’kehá:ka people.

Email ThisBlogThis!Share to TwitterShare to FacebookShare to Pinterest
Labels: Lauren Turner, On writing