Day and Night: Time and Writing

"Days     Days     Days    // much as you get from / one octave to another," says Larry Eigner in My God/The Proverbial. And the proverbial exclamation (my god!) is the day, astonishingly come again. Days as proverbs, verb. I am interested in the Verb of the Day.

No stone soup, the daily special is, as Eigner says, the same from one octave to another, one art to another, one person to another. Thinking through the day is one way to see what we all share. A universal boredom, or excitation, birds in the air, an aversion to light, a ritual of hours, bowls. For Eigner, challenged by cerebral palsy, the daily task was to move his one working index finger, deliberately, over the typewriter. But first it was to listen, the world, as such, by ear, by eye, inducted through the open window: "Things stirring/ together/ or far away"

Writing is another way to say I have something to do today. That's good, a life of attention, intention. But what you're doing and how you do it changes over a life. There once was a time in my writing life when I had time, and did write, prodigiously––journaling, riffing, coffee shops, libraries, bookstores. My god, proverbially, most of it was drivel, but it was accretive, and created its own momentum. Then life changed (marriage, children) and changed some more (a daughter with autism) who doesn't sleep much, is volatile, doesn't speak. And so writing changed.

For the past ten years or so I've been writing a long poem in counted verse––three word lines in gathering strips––that culminated in my recent book Spool (Free Verse Editions/Parlor Press, 2017). There's a chapbook as well, and various cuttings of the spools that mark out a pattern of days, months, years. I've been thinking and being in threes so long that I see clusters and aggregates looming on every page like illuminated script, for reals. I mean, life's hard, parenting's hard, and plans get smashed, chairs overturned, but my three (wife, Aby, son Elias, daughter Maya) have been a functional rest on which to lean and be:

a line singing
makes a limit

Like waking up to the real conversation, day after day, Time's golden measure makes its morning arrival early. Writing's always a furtive activity, or a planned one with late night barriers, or, or, or...it's not writing. So anything you can do to spur the day, the night, is a good thing. I like numbers in poems, patterns of making, the gathering mass of a writing seeking form, the manner in which, as Eliot said, we measure our lives out in "coffee spoons." I didn't start out planning a decade of counted verse, it occurred naturally as a "quick graph" (Philip Whalen) of stolen attention, moments caught in traffic, overheard snippets of conversation, the chant inside my head. A small notebook, scraps of paper, the modal horizon of threes imposed its wisdom over time. Spool's matter measured the duration, showing the struggle that exceeds the plan:

The philosopher Henri Lefebvre in The Critique of Everyday Life, notes the everyday as where all life inevitably happens: as "that which repeats itself consistently" the quotidian, but also that which goes unrecognized, the hidden. And that repetition itself displaces the existential quandary of life. We die; the day hides our death, "it dissimulates the tragic...a lived experience elevated to concept and language," some where and some thing in which to transform the seeming nullity of existence.

Yet what is that language, and where to put it? In my own writing and in my work as a teacher, I've been developing strategies of daily writing around George Oppen's Daybooks. Stephen Cope's beautiful editing of that book (Selected Prose, Daybooks and Papers, University of California Press, 2008) has been revelatory to me. Cope's term for Oppen's ethical commitments, his "negative culpability," works itself out in the Daybooks as a kind of self-instruction. Oppen: "The poet learns almost everything from his own verse,"; and "We do not know before we complete the poem. None of us writes what we already know, and of course that's the essential life of the poem."

Having a place to get messy, work it out, is one way to think with the day. And things gather, accrete, forms cohere. From collage aesthetics and leaping fragments, to the return of the hand to the making of a book, there's something more at stake in a Daybook that makes the thinking dimensional. Kinda like assemblage art, something I'm also interested in. Think Wallace Berman, and photo collage. Or Joe Brainard's notating, well, everything in I Remember. All the things and places written down, day by day. Think trash art and the "found gallery" of the Daybook.

Or think other writers thinking in days. Think Haryette Mullen in her "transactional" tanka diary Urban Tumbleweed: "after hearing that poem from my tanka diary, /you handed me a smooth and pleasing stone/shaped like a lopsided heart."  Or Think Inger Christensen's Alfabet, or Laynie Browne's Daily Sonnets, or James Schuyler's A Few Days, Bernadette Mayer's Midwinter Day, Stephen Ratcliffe's Temporality. Each, in their own way, putting the day to work. I love the mystery each of these writers discovers in the recursive embrace.

Legendary Beat poet Joanne Kyger, who recently passed into the Bardo, made a career out of such attention.  In journals, letters and especially poems of acute presentness, her whole work can be seen as one ongoing poem. "The shape of the day, the words of the moment, what's happening around me in the world of interior and exterior space––these are my writing concerns," said Kyger back in 2005.  (Foundation for the Arts Interview). Kyger's thirty plus book serves as an exemplary practice of being "on time," the title of her Poems 2005-13. Here's the title poem from her collection Again: Poems 1989-2000:


Life has a repetitious feel,


and then a large gasp, someone is gone, forever.


of consciousness,       strands of dreams


precious, rare and mundane, where we live

Consistently, inconsistently we do go on. In the course of time. in the river of time, wind, water, air; eating, shitting, fucking, laughing, crying. Incrementally, within my limit, "words laid down like rocks" (Snyder's "Rip Rap"). Or laid down by my partner in the day (and the night), Aby Kaupang: "Sunday's are inconvenient     god/ as value absolutes away     the dailies / who deliver the enterprise" (Little "g" God Grows Tired of Me). Or Eigner's


through trees and seas


(My God/ The Proverbial) 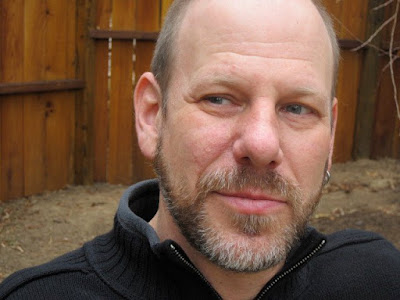 Matthew Cooperman is the author of, most recently, Spool, winner of the New Measure Prize (Free Verse Editions/Parlor Press, 2016), as well as the text + image collaboration Imago for the Fallen World, w/Marius Lehene (Jaded Ibis Press, 2013), Still: of the Earth as the Ark which Does Not Move (Counterpath Press, 2011), DaZE (Salt Publishing Ltd, 2006) and A Sacrificial Zinc (Pleiades/LSU, 2001), winner of the Lena Miles Wever-Todd Prize. Numerous chapbooks exist in addition, including Disorder 299.00 (Essay Press, w/Aby Kaupang, 2015). A founding editor of Quarter After Eight, and co-poetry editor of Colorado Review, Cooperman teaches at Colorado State University. He lives in Fort Collins with his wife, the poet Aby Kaupang, and their two children. www.matthewcooperman.org

Email ThisBlogThis!Share to TwitterShare to FacebookShare to Pinterest
Labels: Matthew Cooperman, On writing

Love, love these musings about the day/night, especially as a place to make a mess. Rabbit holes abound in this seemingly small space...leading to the wondrous subterranean spaces of our lives.

I miss you, Matthew. I used to think this way, and at some point quailed. You made, are making, the better choice.