There are the moments when something is amassing, pressing from all sides, holding me still, and, at the same time, provoking me to act, some impulse that I have not understood how to enact. What amasses isn’t heat, but is heat’s kin in its ability to penetrate, to permeate, to make the climate of the interior porous to what is changing around it. Something has happened, is happening still, that I am in the midst of and somehow missing, and that I have, myself, become missing within.

I may not be its center, and I am de-centered in the experience, in the not-understanding what it is. The “something” opportunes a knowing that brings on a stillness in me (“still” as in the sense of not moving on, but also “still” in the sense of realizing I’m still what I was, not able to engage whatever is amassing). Stillness is only the first order of attention; motion is needed, be it motion in mind, in hands, in words—it might be any of these or other to them, but the provocation must be understood soon enough or the sensation diminishes before I am fully able (willing?) to be conscious of it. So much in such moments might be lost.

Yet, it’s that pause, that stillness, which allows for initiation of a speeded-up, almost involuntary second order of attention—my hand begins writing a note, phrase, pause of words, in the notebook I carry with me.

Sometimes that odd scatter of words in my notebook will hold some glimmer of a clairvoyance in it, which I’ll feel when I open to those words again, later, or the next morning, and write from them. “Clairvoyance,” from the French clair ‘clear’ + voir ‘to see.’ But I hear “voyage” in “-voyance,” and I hear “voice” in “voir.” So I offer them, too.

During my return to that scatter of words, I sometimes feel guilt about the fact that the entry in my notebook was necessitated by an amassing I’d not been able to understand, that I’d missed. But if I bring that guilt forward, and face it cleanly, then it shifts. Such instances are opportunities in which  I might begin to navigate a new trajectory toward a kind of becoming that is more than my current fixity of framing allows.

This morning, once I’ve walked back into the house, after dumping the kitchen garbage, after making too much noise, after taking up too much space in the outside without sensing first what that predawn dark might hold—I realize I’ve missed whatever this particular morning’s pre-morning dark was. “No different than any other morning,” I rationalize. There’s nothing new out there. I get up at this time nearly every day, and my routine often takes me outside briefly. But today something in the sound of the front door’s lock locking is different—an inexplicable difference, which rests uneasily under the generic sensation-category of loss.

Some of the orders of attention that I find in the act of writing are close kin to the order of attention that prompts me to unlock the door and go back to stand outside—which may result in finding nothing, except to feel what “nothing” amasses nonetheless.

I appreciate that word “nonetheless” as it begins with the null of “none,” (which can suggest the connotation: “no one”). But the extra “o,” which would create “no one,” is hidden under the “n” ’s visor—I call it “visor” since it’s not a large enough overhang to call it an umbrella, it’s not a complete obscuring. Next comes “the,” or “the less” which suggests that the “less” here is specific (“this less” is being pointed to; it’s not “any less,” not “a less”). Common reading of the whole would suggest that “nonetheless” is proposing an equivalence. In other words: something “is the case nonetheless,” or is the case regardless. But I can also hear in it a naming of the “none,” as in “let me introduce you to “none,” from the family of “theless.” As in: “Here’s None the Less.” Or “Here’s Atilla the Hun.

I realize that I’ve digressed in that last paragraph—playfully, absurdly, “none”-sensically…

How will I know how far to let myself digress when I’m working to open an idea in my mind, in my writing, in my poem’s line? I suppose that, for me, I need to keep checking to see if I’m still having a physical experience of something amassing, some heat—a sensory component. I can admit to myself that in the above paragraph, as I typed “Atilla,” I felt I’d lost some heat, lost my sensory component. It was, for me, time to stop. To breathe.

I often remind myself of what Henri Bergson recounts: it is useful to attend to the body’s forms of sensate awareness. His example is that we often laugh before we realize why we are laughing, before we’ve parsed out an intellectual explanation: the mind comes in afterward to explain our physical response. I take this to suggest to me that it is useful to feel the laugh, to feel the sensate awareness—how often do I ignore it? Do I fail to take the time to ask my intuition to engage with it? How often such opportunities are lost.

For me, when I’m working in the nonetheless, there’s a sensory component that rises, that comes on, as involuntarily as a laugh. As I noted when I began this writing—it might be a kind of pressure, a heat. It might be a feeling in my throat, or a very subtle shiver that I feel in my chest, or at the back of my neck. For how long will the sensory remain animate? For how long should I keep fitting words to something that I can’t understand, that may even seem counter to what I typically might write, to what I expected? These are questions that sit outside of the experience, and that overly logical generalizations can’t necessarily answer. To approach this too logically, with too much explanation, is to sheath the experience in intellect’s veils. Veils can be lovely, can be nearly sheer—in that electric-translucent shimmer, which very fine, very thin fabric yields—can animate further what emanates, can help me to see the shapes, the contours of a meaning within the veils. It can be a useful thing, to use language in this way, for a while. But, at some point, what’s there may be entirely obscured. Then it’s time to track back, or to begin again, after a pause. Maybe it’s time to step outside, into the late morning. Or, it’s already late, and I should be leaving for work!

Michel Serres notes “every form is draped in an infinity of adherences.” To sense and then to suffuse the sensory with language, and language with the sensory—this is an act that I might experience as an undraping of a form, even if the form, by its nature, continues to move within the infinity of its adherences, beyond the reach of my act of finding, since no poem, or piece of writing, will conclude its finding out. But, what I take from Serres is more: I must stay alert in my sensate being, since the act of writing may begin to obscure what I was seeking, may begin to occlude the act of finding with only more adherences. Such are the lively paradoxes; such are the risks. 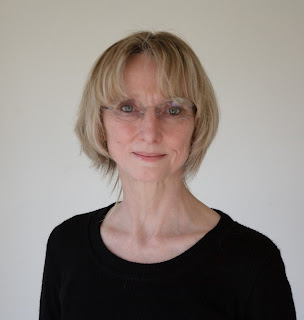 Rusty Morrison’s Beyond the Chainlink (Ahsahta) was a finalist for the NCIBA and also for the NCBA Awards in Poetry. After Urgency (Tupelo) won The Dorset Prize. the true keeps calm biding its story (Ahsahta) won the Sawtooth Prize, the Academy of American Poet’s James Laughlin Award, the Northern California Book Award, & the DiCastagnola Award from Poetry Society of America.  Whethering (The Center for Literary Publishing), won the Colorado Prize for Poetry. Book of the Given was published by Noemi Press. She has received the Bogin, Hemley, Winner, and DiCastagnola Awards from PSA. Her poems &/or essays have appeared in Boston Review, Iowa Review, Kenyon Review, Lana Turner, Pen Poetry Series, Prelude, VOLT, and elsewhere. Her poems have been anthologized in the Norton Postmodern American Poetry 2nd Edition, The Arcadia Project: Postmodern Pastoral, Beauty is a Verb, The Sonnets: Translating and Rewriting Shakespeare and elsewhere. She has been co-publisher of Omnidawn (www.omnidawn.com) since 2001. She has taught in MFA programs, been a visiting poet at colleges, and teaches workshops through Omnidawn and elsewhere. Her website: www.rustymorrison.com

Email ThisBlogThis!Share to TwitterShare to FacebookShare to Pinterest
Labels: On writing, Rusty Morrison