Writing as a way toward innerness, an organ of innerness.
I am not just trying to be a human being.
What are we meant for?
As in, a body walks into the world.
We are transmitting, performing, a mouthed thing into the world.
Is there humor in this story?
I know what to do in my innerness.
Language is the presence of watching and being watched.
A voice walks into a room.
The speaker is leaning heavily on their left leg and this can be heard through the folds of the vocal cords.
There was a moment when the container led to content.
Or reader, in your terms, there was a moment when the form made the content.
But first, there was motion.
There was inside and outside.
Then came up and down.
All this because of a midline, then multiple points of resistance.
There are joints between the bodies.
The speaker on their left leg and the hearers now.
I saw the back of his body disappear through the door down a long hall, his left shoulder drooping.
The hallway a dark panelling, fashionable in the late 70s, somebody got a good deal on that.
I felt as if they were connected, the man walking away, left shoulder drooping, and the sadness as I remembered him lacing up his shoes in the morning before he left to go to work.
He was a young man then.
He was a young man thinking of this list: get gas in the car, pump up the tires, punch in, start the computer, sell sell sell, repeat repeat.
Before there are too many of you, standing with hands in pockets, let me say
My lavender is dead, has died.
It was his garden before it was mine.
To affect the future of the yet unborn.
That’s what’s for breakfast, friends.

What is the poem? Is it having all the parts, being published, overt, checking the list? What about my friend whose life is consumed by caring for her small children? Or the one who cares for their dying parent? What about those? Are they the poem? Is life the poem? The transformation and breath of sap moving up and down, x times a day, feeding itself? The world is so loud you can barely hear it, the poem. Why do we keep on? In my partner’s native language (Farsi), there’s a phrase I love, which roughly translates, sometimes you ride the saddle, sometimes the saddle rides you. It’s like this with poems, maybe one kind of rhythm. It’s coming to you, you’re ready for it; you miss each other traveling in opposite directions.

Crippled by that adage, write if you have something to say.

No one talks only if they have something to say.
If only!
What about not saying what you have to say?
Say nothing.
Is that the poem?
Or saying something inside of saying nothing?

Writing as a failure to be in the made world with its noise. 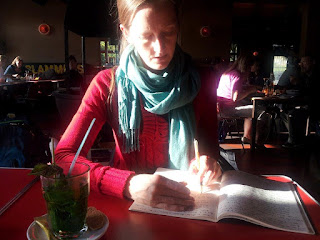 Laressa Dickey [photo credit: Lily Kiara] is a writer based in Berlin. She's the author of several chapbooks including A Piece of Information About His Invisibility and apparatus for manufacturing sunset, and the poetry collection Bottomland (Shearsman). Two books are forthcoming: Roam (Shearsman) in 2016, and Twang (Backwaters Press) in 2017.

Email ThisBlogThis!Share to TwitterShare to FacebookShare to Pinterest
Labels: Laressa Dickey, On writing