WHAT’S BEHIND THE WORDS?
Geoffrey Young

So various the acts of writing, so broad the range of voices, so dispersed their points of origin, so specific their raison d’etre…. Poetry cannot be pinned down to a single definition, nor thought of in terms of some hegemonic mode.  And if I say “the poem is a thinking jewel”?  Whether lyric, narrative, imagistic, disjunctive, structural, senseless, pellucid, or opaque; whether brashly contra good taste and grammar or buttoned down with classical ease, a poem should embody the essence of transformative/creative intelligence, also known as sustained invention (sustained attention), a sort of chaos seized from the heart of order (or an order seized from the heart of chaos).

Reality has nothing to do with it.  Words exist.  Let’s not play dumb. They allow the ear, eye and mind to make connections between different semantic layers.  Each word forms the center of a cloud of nuance and connotation, allowing itself to be massaged by whatever signifying hand is present in a given context.  What flattens and superficializes the associative halo is habitual usage.  By pushing back against conditioned usage, and by heightening the connotative charge of words, the poet redefines the boundary of meaning by reclaiming the humanity and fecundity of language on his or her own terms.

Language is a continuous nominative surface that extends in a sort of topological mediation between self and object, which is to say, between self and world. Along the trail, due to the particularizing aspect of word choice, one’s “story” gets told.  A feeling for the world, both as attribute and insight, as well as a politics and a morality, are present in the language in what may have become a cliché: the mutual identity of form and content.

Poems don’t aspire to the condition of music or they’d play a cornet.  The trap is meaning: words come pre-loaded with signification and history.  Gibberish, no matter how sonic, always suffers from lack of sense.  The Mallarméan poem, held in tweezers and studied for symbolic insight, can be considered an object in itself.  Most writers provide the more traditional “window on the world.”  James Schuyler’s skinny descriptive poems and John Ashbery’s long-lined poems of wandering hyper-cultivated ruminative goofs grow from the same stalk.  Started as scribbles, typed and retyped, they emerge at their best as hood ornaments on Western evolution itself.

Reading should challenge and amuse, it should entertain and illumine.  No one can read everything; no one should even try.  Poetry can be found at every crossroads in the nation, addressing the traffic as it flows.  Because of this, there is no poetry with a capital P.

A writer collaborates with the language, which, marvelously and maddeningly , has a life of its own.  Poets enter the fray with everything  to prove, including adaptability and stamina.  A reader completes the poem, just as a word, a phrase, a feeling, a strong emotion, a story, or a methodology starts the thing in the first place. The innovative poet strives for a multiplicity of readings, is against closure (any boxed-up, formally contrived terminus of possibility).  Meaning inheres in the particulars of word and sequence, in the quality of perception, in the hound dog sound of sense.  It works to build larger units by accretion, and often succeeds.

A poem is an act of belief in the usefulness of art.  Innovative poems have a way of calling into question that art, challenging the nature of belief, putting pressure on the medium of language itself.  But once written, and published, the poem stands on its own, a little or large node of “artificial intelligence” symbolically encoded in a language wrested from its own monstrous life, and waiting to be decoded by a reader who can provide a surrogate heart. 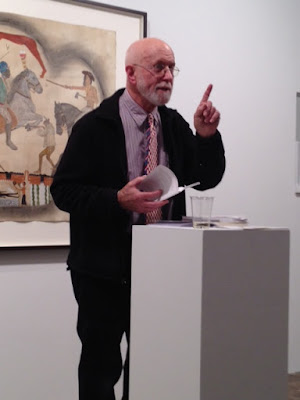 Before settling in Great Barrington, Massachusetts in 1982, Geoffrey Young spent student years in Santa Barbara (UCSB), and Albuquerque (UNM), then lived for two years in Paris (a Fulbright year followed by a six-month stint working for La Galerie Sonnabend).  From 1975-1982 he lived in Berkeley (two sons born).  His small press, The Figures (1975-2005), founded in Berkeley, published more than 135 books of poetry, art writing, and fiction.

His own recent books include Click Here to Forget, Isolate Flecks, 2016;  All the Anarchy I Want, Lonely Woman, 2013;  Dumbstruck, Yawning Abyss, 2013, with paintings by Daniel Heidkamp; and Get On Your Pony & Ride, Non-Fiction, 2012, with paintings by Chie Fueki. A new chapbook of sonnets is imminently forthcoming from above/ground press.

He has directed the Geoffrey Young Gallery for the last 24 years, as well as written catalog essays for a dozen artists.

Email ThisBlogThis!Share to TwitterShare to FacebookShare to Pinterest
Labels: Geoffrey Young, On writing

GY: I think you are becoming an 18th-Century Neo-Classicist in your work and commentary. Teach & entertain, brother.