I am neither young nor old, i.e. I am at that point where no one much notices what writing I do. Young poets deservedly occupy the limelight, or what there is of limelight for poetry in Canada today, they and the revered dead, who occasionally get statues erected to them in Queen's Park, near where the business of provincial governing goes on. The statue of Al Purdy stares at the statue of Edward VII.

Bitterness is to be resisted. What lover of William Carlos Williams's poems doesn't cringe at the thought of his Autobiography, written when he was a crabby, self-pitying old man? Better to get your memoir out of the way when you're still young, like Lautréamont. Then forget about poor Narcissus, his "dim fragrance/And the dim heart of the river."

I began writing poetry out of emotional need: a confessional, a talking cure, a vague aspiration to shrive myself without help from anything or anyone save words and rhythms. It took a long time to figure out that that impulse often made for boring poems, whatever psychoprophylactic benefits it might have had. Sitting on the sunny deck of a summer cottage somewhere north of Toronto in the early 1980s, I decided quite consciously to give up that kind of poetry, and to try to open up my writing to something more encompassing than personal experience and private grief.

So for thirty years I built a long poem in prose and tried to convince myself that this was better, that it made my poems more interesting, less gnarly with unfettered feeling, more prospective, more philosophical, more--dare I say it?--beautiful. With seven books of that poem now in type and an eighth in progress in a notebook, it has not seemed to make much commotion in the world. But as Stephen Rodefer says in a Keats-inspired poem called "Poetry and Sleep," "The universe may turn its head around one/Of these perpetual nights,/And I want to be ready." Probably it won't. Rodefer doubtless had Catullus in mind too: nox est perpetua una dormienda. That's more likely.

Maybe those incredibly productive Victorian novelists spent the greater part of their waking time writing. Most poets don't, though they wander through their days being poets even while they're looking after babies or grocery shopping or walking to the post office or making their frequent visits to the LCBO. I just mean that one is conscious of noise, attentive without even thinking about it to how a phone number tapped into an old-fashioned telephone can sound like a melody, alarmed by birdsong, sometimes painfully immersed in the soundscape, distracted by kids playing audibly in a nearby schoolyard even when their actual words are not discernable. The world speaks and poets listen.

"For Christ's sake, you can read/it all in his poems." That's Rodefer again, this time translating François Villon, the final line of his epitaph, "Cy gist" (Here Lies). It does all get into the poems, things the ear hears and processes: the music of the everyday, the residue of what's been heard.

There's more of course. There's what we retain in our primary auditory cortex of poems we've read throughout our lives, not so much the content as the music: cadences, tessitura, consonance and dissonance, phrasing: emotional alliances, sonic aspirations. And there are dreams, understood not through the contemporary activation-synthesis hypothesis, but by the older and surely lasting view, that dreams are partly the remains of the day, partly the recrudescence of old emotions, and partly creative writing itself (the dream work). And there is childhood, which is emotion and imagery, the pull of what is remembered as well as what is not, source of metaphors that are often more profound than we even know.

Beauty is an unpopular word today, but really, without beauty, what is there to make us go on writing poems? Elaine Scarry has said that beauty demands of us "acts of replication," that is, we experience it and we want to make it again in a different form. Perhaps many things in the world make us want to replicate them, but beauty seems especially crucial for poetry.

The dead are silent, and there is no prayer
to chivy heaven and make our need known there.

Silence begins as the trees end their painful reach,
each branch an indecipherable scribble on the air

where it stops, pointing nowhere, a scratch
on the void. Sometimes

I do lose heart, start to think I am a ghost with
no past to account for me, no body to stop a

hand or bullet. Don't, the heart says
unconvincingly, give up on beauty. 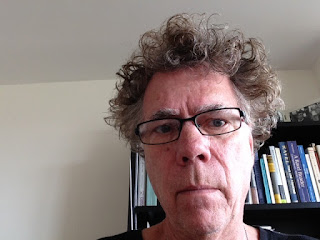 Bruce Whiteman is the author of many books of poetry and cultural history. His last book was entitled Tablature (McGill-Queen's University Press, 2015). He reviews regularly for Canadian Notes & Queries, The Hudson Review, Pleiades and other journals.

Email ThisBlogThis!Share to TwitterShare to FacebookShare to Pinterest
Labels: Bruce Whiteman, On writing