You write because you are haunted: not hunted, not vanquished, but visited by something that hovers just beyond immediate perception.  You write because you are aware of something that flits close then away, that is vague but prescient, like an invisible twin, an entity you can only approach by by calling out, sounding, knowing that words are equally abstract. Words may say other than what you think, and may mislead away. Words are themselves but they are also other, scattering without discretion. A ship is spelled s-h-i-p but it is not a ship. It may also be a shape and a slip across an expanse, an estrangement, with an interrogation point looming in the rising song.  The writing process is a reach across this unknown, and as the letters are pushed and pulled across, they dissolve into something greater than themselves, somehting as expansive as a family never met, a hauntology, a bush of ghosts.

The stories you want to tell are always the stories that tug and release when you try to grasp.  The only way you can pursue them is by laying out a trail of letters, a trail that you and others can follow, a spelling into being. Somehow, these stories are always vexed by inabilities, inadequacies, lack. Inability to completely address or redress immediate or historic grievance, inadequate ability to act on the world and directly effect change, inadequate ability to rise above the roiling mess of dialogue that is, at the end of the day, just dialogue struggling with dialogue. Inadequate ability to expand the stories of the minor characters in official histories, in everyday life, and in literature: characters who have been written into the background or erased altogether, and whose haunting is never fleshed into full presence.

The process of writing is also bruised by dismissal and rebuke.  When it hears: we don't have an audience for your story and your kind of work; your language is too strident; your rage is too loud for this festival; your verse lacks "density";  your poetry isn't nuanced enough, you hesitate and question the value of your undertaking.  But even in the face of rebuke, the mind drifts.  Its unconscious drift traces letters, words, and that too is haunting.

You reckon with the vexation, hurt, digression, and haunt before sitting down to write.  This writing, then, honors the difficulties and the inadequacies.  It is a ceremony of slow sentences encircling, decorating, and temporarily ennobling the crushed ego, a wreath of letters to throw into the void, perhaps a sacrifice or a purification rite, an acknowledgement that this service is not good enough but that it will be performed in spite of its naught. Welcome to the ceremony. 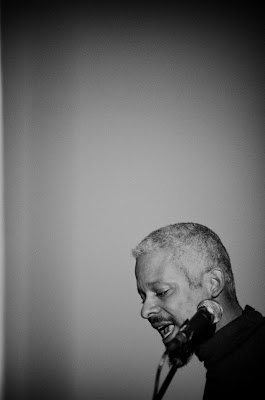 Kaie Kellough is a word-sound systemizer. His systems originate in the inchoate swirl of vowels, consonants, misspellings, shapes, stammerings, and emerge as audio recordings, books, visual entities, volumes of letters, and performances that verse and reverse utterance.

Email ThisBlogThis!Share to TwitterShare to FacebookShare to Pinterest
Labels: Kaie Kellough, On writing