For me to talk about writing, I’d have to explain my obsession with James Joyce.

I was in my second year of doing my undergrad at the University of Toronto. I had hit a hectic time of exams and essay writing and two hour commute from home to my campus garnered me time to study and complete my class readings. During this time, I was tackling Ulysses for my Post-Modernism class. On little sleep I found myself in the middle of a pub scene in the chapter called Cyclops whereupon a character called The Citizen (an Irish nationalist) goes on a xenophobic rant against our protagonist & simple hero, Leopold Bloom. I fell asleep on the train and lucidly dreamed of the events I had just read. When I woke up, I hit my head on the windowsill and something happened. It’s something that I’ve tried to capture since then. It was a fleeting moment; an epiphany. It hard to put into words, but everything felt so clear and could think many things at once. It could also have been a psychotic break due insomnia. I don’t really know. What I do know is that my heart raced so fast and having missed my stopped. I clung tightly to my book just to get some grounding. It wasn’t panic I was feeling, but rather it was an extraordinary sense of elation.

Since that fraction of a millisecond I’ve read Ulysses too many times to count. I find new things in it and learn many interpretations from others who have digested it as well. I’ve gone on to type his first work The Portrait Of The Artist As A Young Man in its entirety online and I am currently transcribing Ulysses by hand, a work that is also online through scans of these books.

Think of a seed that takes root in freshly poured concrete. It has death written all over it. Sometimes, in defiance of its predicament, the seed bursts open out of the dried concrete and wriggles its way out into the open. Suddenly a schoolyard, a parking lot, and a subway station wall all have sprouts and seedlings growing out of them. In concrete, a budding flower from any garden becomes a weed
My ideas can be impossibly ambitious or ridiculous useless. Once in a while, a concept plants itself like the seed mentioned above though and it will take root. It won’t budge. It doesn’t matter how idiotic or over my head the thought is, it keeps nagging at me until I let it out.

“You’re going to write me now,” it says.

“What’s the worst that could happen? You say nothing? Pffft. Write me!” it demands.

“Ok, but it doesn’t mean I’m going to anyone see you.”

I write it and instantly feel relief. Before I knew it, without editing it, I’d post it, and run away to do errands. It’s too scary to look back and cringe at what might have come out of my head. I’d discombobulated myself.

Honestly, those are the moments when I have my most fearful and satisfying times as a writer. The Ulysses-ean epiphany exists there.

“Every life is in many days, day after day. We walk through ourselves, meeting robbers, ghosts, giants, old men, young men, wives, widows, brothers-in-love. But always meeting ourselves.” – James Joyce, Ulysses

James Joyce lived most of his life in a self-imposed exile. This nomadic state spilled over to his work and he was obsessed with collecting words, learning many languages, and recording as much of the world as he could. The great trauma of not living in his homeland caused him to hoard the world of words. His passion for interpreting the real world, the daylight hours in Ulysses and the nighttime dreams in Finnegans Wake, were his way of trying to translate the reality of human existence. Writing is like exploring a mystery and recovering the known. A dedicated lover of literature faces the hard task poetic interpretation utilizing the very limited sphere of language. Individual emotions and the filigree in their personal experiences are as numerous as the stars in the sky.

From Eveline, a short story in Joyce’s first collection, The Dubliners:

“She sat at the window watching the evening invade the avenue. Her head was leaned against the window curtains and in her nostrils was the odour of dusty cretonne. She was tired.”

Joyce was a master of language. He claimed to be at the end of language and felt compelled to break it. He lived, worked and breathed in the rapidly advancing time of industrialization. The assembly line, electricity, technology changed the world every day. Joyce felt like he needed to translate his here and now via a new way of writing to catch up with it. It could be said that Finnegans Wake was one of the first works to showcase prose and poetry in a technologically advanced way. He created a word assembly out of notes and text detritus to write the undecipherable in the best way he could.

Today some writers parse their words or remix them the words of others.  This is constantly happening in social media and the digital world of writing. We all have opinions and we must share them. We all have objectives and we must collaborate them. Writers can pick and chose from many mediums to sculpt worlds and create situations. There are perpetual epiphanies within this kind of experimentation.

It’s a frightful, but provocative world to write in nowadays. Real and digital worlds are built out of words. People bargain, deal, and navigate the universe through speech and written text. It is assumed that everything has been written and that all a writer is doing now is rearranging the alphabet. What would James Joyce do?

He’d probably tell us to write from the outside in and then from inside out. Joyce was a man more concerned with how to say something than saying it all. Shut our eyes to see the best way to put it down and make the world clearer for everyone. If a seed of an idea implants itself in your brain, no matter how absurd it is, go for it. The mind is a universe of unknown obscurities and there is connection there if we let it all out. The seed becomes a weed in the concrete, but some of those seeds become giant oaks despite the soil they break out of.

All of these tiny seeding epiphanies form unique algorithms to become a meditative grain, to become a part of the writer’s consciousness, to become a biting thought, and eventually become part of a written page. Ideas are all different buds formed through various patterns in the mind of the writer. It is in the process of writing and the world behind the words where the real reason for writing dwells. We write to reveal ourselves.

Language is a virus because it exists to make ideas solid. The computer I’m writing on now was once just a dream. Now I type on it. The possibilities in this are terrifying. All the dreams have the possibility of seeing the light of day. Look what it did to James Joyce? Try reading Finnegans Wake or Molly Bloom’s soliloquy in Ulysses. As a writer, I am trying to give birth to dreams and I’m having the time of my life navigating that realm. All because I hit my head while reading a book.

Writing isn’t a condition or an affliction. It helps me escape and offers me relief. Writing is human nature. 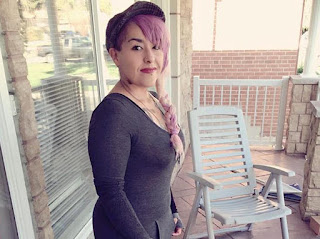 Jacqueline Valencia is a poet and film/literary critic. She has written for Broken Pencil Magazine, Lemon Hound, Next Projection, subTerrain magazine, and Notebook Mubi among others. Jacqueline is a senior literary editor of The Rusty Toque and a CWILA board member. Her debut collection There’s No Escape Out Of Time will be out with Insomniac Press Spring 2016. She lives in Toronto.

Email ThisBlogThis!Share to TwitterShare to FacebookShare to Pinterest
Labels: Jacqueline Valencia, On writing