my writing has always been tied to the environmental. what this means is that I am quickly shut down by the mediocre. by energy that moves only according to imposed law. by food and drink that is overpriced. by cities that require cars, unfriendly to pedestrians. by cultures that insist that you are only a writer if you go out to every event. it sounds reactionary. but, really, it isn’t. when I am writing, I cannot be in social circulation. my mind is always on the page in the page somewhere else.

this is just me. I have never understood how it happened that to be a writer meant to be part of a community of writers. I have never understood the idea that to build an audience for one’s writing, one has to seek out the fraternity of other writers. I find that frightening and it shuts me down and causes me to flee from other writers. music, movies, theatre, travel: here are my influences.  this is not to say I don’t read. I read a fair bit. too much sometimes. I am aware that I will have to participate. I have nothing but respect for anyone who writes.

in terms of my claims of writing and environment and the links between the two, Ottawa acquires sets of significances for my recent project. this city was my entrance into Canada, an entrance into what is now called the Caribbean diaspora in Canada, and stretching it even further, the South Asian diaspora in Canada, which I know nothing about at all never having been raised with any ethnic or cultural markers of India beyond the once in awhile curry. modernity meant politics and economics in my family.

so what happened in Ottawa was this: there was never a present here only a past, a disappointment, a longing. Ottawa was not London England for my parents. they were never prepared for Canada and its landscapes. they were being imaginatively prepared for generations for England. think Jamaica Kincaid’s novels, primarily Lucy where the heroine discusses a “disappointment with reality” and the melancholia that ensues.

so coming to Ottawa for the summer is to court a tragic vision for the sole purpose of capturing something broken, fractured, really, the failure of the notion of diaspora---at least in my experience---to deliver some sense of belonging. Ottawa becomes the tristes tropiques because Ottawa must be writing and the writing is all backward-reaching and the memories are long because they don't begin and end with me but jump back into mothers, fathers, jungles, grandmothers, grandfathers, plantations, ships, rusty padlocks, saltwater.

what this all means is: when writing a book that is desperate for its own nation, its own identity, yes, yelling at, always yelling at what got packed up in suitcases so that it could get remembered in Ottawa, when writing that kind of book, I am unable to leave my house, carry on new friendships, attend functions, get contaminated by new memory, Conrad's hippo meat and all that. Ottawa is more than mourning. it’s sturdy cathexis refusing the de-. thus, it’s treacherous for me.

thankfully, this only happens when a book is being written. the first two meant I never left the house in Montreal in the late Nineties for about three years. though Billy and I would go swimming and to the movies. so, I did leave the house. when I am not writing in Ottawa, I hop on buses and go all over alone making notes or I eat scones at the Scone Witch or I play board games.

when the book is done, I hope I don’t find myself too lonely. usually making a book means the disappearance of friends brought on by my own disappearance. i remember reading somewhere that Dorothy Livesay, one of the greatest poets ever, had different groups of friends throughout her lifetime and I wonder if the writing process and what it takes out of you, especially when the writing is not being done casually or constantly in correspondence with what wins awards and acclaim, had anything to do with her ever changing circle of friends?

poetry's selfish, greedy hold on me has taken decades of acceptance. the politics of the language however and the ways in which I remain part of conversations about social, political and economic change makes me ok with the isolation that comes with writing.

make meaning mantra the morning rule day to day until it's done. 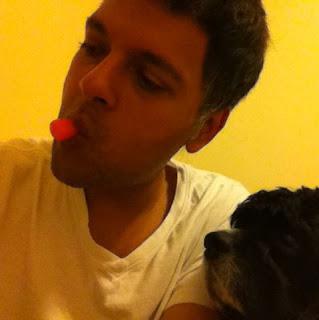 Faizal Deen lives in Windsor, Ontario where he is completing an MA in literature and creative writing. He is also the UWindsor’s inaugural Student Writer-in-Residence for the English Department’s undergraduate creative writing program. Deen holds a BA in English Literature from Queen’s University at Kingston, Ontario. Additionally, he has studied at McGill University, Oxford University and at the University of the West Indies, Mona Campus. His first book, Land Without Chocolate, a Memoir (1999) was published by Wolsak & Wynn. He was a contributor to Our Caribbean: Lesbian and Gay Writing from the Antilles, edited by Thomas Glave and a LAMBDA literary award winner in 2008. A scholarly edition of Land Without Chocolate, a Memoir is forthcoming along with a monograph on his contributions to the emergence of a Queer Caribbean literary canon.

Email ThisBlogThis!Share to TwitterShare to FacebookShare to Pinterest
Labels: Faizal Deen, On writing