Process. I don’t know that I have much to say about it that anyone other than me would find interesting. Once or twice a day I sit down and I write. Sometimes I write a little, sometimes a lot. Sometimes it’s a revision and sometimes it’s something new. I don’t know why the words are there and I never have. It used to be different. I would sit down when the words were already coming, or I would sit down and nothing would happen. Now I sit down and I just get to work. I write. The words are always there so I write them down. Sometimes there are three, sometimes there are three thousand. It took me years to get to this point and I don’t know how long it will last. It’s not that it’s any less of a mysterious or an alchemic process now than it was, it’s just easier. I am quite aware that someday it will end.

I work on more than one project at a time. At the moment I am putting finishing touches on a book to be released this fall and I am finishing the first draft of one novel (65,000 words) and starting the second draft of another (95,000 words). I’m also making notes towards a new book that I haven’t actually started to write yet. This way there is always something to work on. I take notes during the day on my phone (I used to write them on my hand). I almost always have headphones on when I’m writing, the music gives me something to do while waiting and to some degree likely informs what I write and so I’m careful about selection although as soon as I begin writing the music disappears from my head. I find it very challenging to watch narrative on television or in film when I have a project on the go and I always have a project on the go so I tend to stay away from these things for the most part. I read a lot. The current music playlist for the novel I’m spending the most time on is as follows: The National, Frightened Rabbit, Seasick Steve, Wiseblood, Snoop Lion, Justin Townes Earle, Low, Don Covay, Beirut, Schlomo and Lightnin’ Hopkins. Each book has its own playlist. I’m starting now to publish these playlists at the back of the books.

Mostly I write at night. I’ve never written anything in the morning unless I’ve been up all night.

I don’t do anything else when I’m writing. I don’t eat, I don’t drink, I don’t leave the desk and I don’t tend to look away from the work. This didn’t used to be the case. When I was younger and had to wait for the process to start I found countless ways to do other things, to leave the desk, to not write. Now I’m quite content to just sit with the words. More content than when I’m doing just about anything else in fact. The only exception now is that I might pick up a guitar though I don’t have to leave the desk to do this. I would describe myself now as very integrated with the process whereas when I was a younger writer I was in conflict with it much of the time. I didn’t realize it then though, I just thought it was a struggle. I suppose I had to go through that.

None of my previous houses have had a place dedicated to writing. I once wrote a whole novel in the wet moldy dirt floored basement of a hundred and fifty year old house. I now have a bright and airy loft of an office overlooking a huge oak tree. It’s like a treehouse.

Here I have everything I need. Paintings by bill bissett, Stewart Jones and Elizabeth Rainer. Signed broadsheets by J.P. Fiorentino, Susan Musgrave and Stan Bevington. An historic map of St. Thomas Ontario given to me by Sandra Ridley. A 1930’s Underwood. There are photographs: my wife, Johnny Cash, my dog (also named Cash), Jay-Z, Gillian Sze and Ken Carter (who both appear in my next book), a paint by number of Jesus, Jumbo the circus elephant, some Greg Curnoe artwork and some Jean Michel Basquiat. An original poster for the film Hard Core Logo which I’ll be getting signed by the director Bruce McDonald (who is also a character in my next book).There’s a ceramic skull from Mexico I bought the day my father died. A bowling pin. My three guitars; a Gretsch Alligator Resonator, an Alabama resonator and a Fender Stratocaster. A plastic Superman. Three guns. A Popeye comic book. There’s a coffee mug that says “Write Like A Mother****er” (I saw one belonging to Jeremy Hanson-Finger online and had to order one the same day). There’s an old tin sign, hand painted and found at a flea market, that says “LIFE IS TOO LONG TO LIVE LIKE THIS” and a wooden sign that says “RIDE ‘EM COWBOY”. I often wonder about the individual that painted that tin sign. I mention what is here in the room because for the most part these things are important to the process. I don’t need them in order to write but they are things that have accumulated here because I am a writer, and they create a workspace, a space which is welcoming to the work. Talismans.

I have almost died or been killed nine times. I am lucky to be a working, publishing Canadian writer. It is one of the three things I’ve wanted most in this world. I’m lucky enough to have the other two as well. Family and friends and a God who is intimately connected to this life. These are the things I carry with me to this space each day. I am lucky that the words come. For as long as they come I will continue to write them down and hope that they find readers. This is my process. I keep on writing. Life is too short to live any other way. 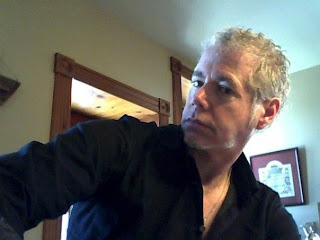 MICHAEL BLOUIN's critically acclaimed first novel Chase and Haven (Coach House) was a finalist for the Amazon.ca First Novel Award and won the 2009 ReLit Award for Best Novel in Canada. In 2007 his first collected poetry I'm not going to lie to you (Pedlar Press) was a finalist for the Lampman Award. In 2011 Pedlar Press released Wore Down Trust which was nominated for the ReLit Award and won the 2012 Lampman Award. In 2013 the renowned publisher BookThug will publish his innovative fourth book I don't know how to behave. He was a finalist for the 2010 CBC Literary Awards and his work has been published in many literary magazines including Descant, Arc, Branch, Dragnet, The Antigonish Review, Event, Grain, Queen's Quarterly, The New Quarterly, Branch, Dragnet and The Fiddlehead. He is represented internationally by Westwood Creative Artists. He was recently shortlisted for the bpNichol Award for his above/ground press chapbook Let/Lie co-authored with Elizabeth Rainer. Author website www.michaelblouin.org
Posted by rob mclennan at 1:00 PM

Email ThisBlogThis!Share to TwitterShare to FacebookShare to Pinterest
Labels: Michael Blouin, On writing

Good words. Thanks for sharing them.