I've been writing poetry since I was in grade six at Queen Alexandra Public School in 1968 when I handed in the very naive poem "Jews and Negroes Hand in Hand," for an English assignment, to a very perplexed Mr. Rutherford.  In high school I was lucky to have an excellent teacher who fed my interest in poetry with actual books.

When I decided to be a poet I really had never met one or seen one on TV.  I had an idea of what a poet was, but no real clue.  Forty years later I've been published a couple of hundred times in magazines, journals, reviews, anthologies and every other thology.  I've published books, chapbooks, broadsides, posters, audio tapes, videos, CDs, posters, you name it.

But I remain one of those poets you might have read if you stumbled across a book of mine in a second hand store.  I recently had a phone call from a publisher of two of my books.  His publishing house had been purchased by a larger publishing house and one of the first things they were doing was purging by pulping "dead stock".  That meant that my remaining books would become toilet paper.  Perhaps an entirely too obvious metaphor but it wasn't allegorical, it was happening for real.

At this point in my literary career was bringing me little joy.

And it was a damned shame because I love poetry.  I started to write it because I loved reading it.  The first poet who really turned me on was Gwendolyn MacEwen and her fine book The Armies Of The Moon.

"their leaders stand motionless
on the rims of craters"

I didn't get it at all - but I liked it.  It made me feel smart and stupid at the same time.  Challenged and excited.  I liked that it was an entry point to a world I didn't know.  Of course I only know that in hindsight.  Since discovering MacEwen, I could easily divide my life into poetic discoveries.  After MacEwen, Cohen, Birney, Layton, Pratt, Lane, Lowther, Souster, Purdy, Bukowski. Ross, Tourbin... it is an endless list, an iceberg that I've shown the tip of.  Since then, outside of my marriage to my lovely and patient wife, my greatest joys have come from reading and discovering new poets.

A few months ago on while on Facebook, I posted a small note about a book of poetry I'd read and enjoyed.  For the fun of it kept doing it.  Two or three sentences and the title, name of the poet, etc.  After a few weeks my friend Christian McPherson said I should blog about the books, but I had no interest in that.  Then he said, "but they will send you books!"

Christian set up my blog and I started.  I write about books I like.  Not really reviews, because they lack any critical analysis - instead, I would call them appreciations.  And to my absolute joy and utter astonishment, Christian was right, books started to arrive at my door.  Little bundles of joy.  I started collecting poetry long before I thought of being a poet.  Having new books, new authors, arrive at the door, perfect.

Then a curious thing happened.  I'd always thought I was a good poet, not great, but happy to call myself good.  And like many poets I know, I had a chip on my shoulder about my lack of success, no small amount of jealousy about those whom I perceived received undeserved success (which really meant - any success other than mine).  Having all these new poets come through the door has been a staggering reality check and punch in the head.

In a few short weeks it was clear to me that there were an army of poets I hadn't read.  Gwendolyn's excellent army of poets who wrote in as many different ways as there are languages and voices.  It was a joy to discover and a release from any frustrations I had about my own craft.  Clearly I had been lucky to publish what I had, or at all.  All these years I'd been reading as much as I could find at the local stores, whatever I could amass - only to recently discover that the small stream I thought I was swimming in is a rather large river, an ocean in fact.  The vast army of poets, so many of them truly excellent, has given me back what I loved most, first.

I rediscovered the joy of finding new voices, voices that astonish. 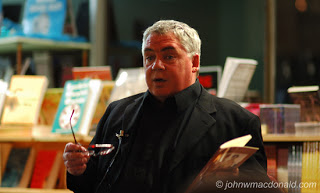 Michael Dennis [photo by John W. MacDonald] was born in London, Ontario in 1956. He is the author of numerous books and chapbooks. His first, Quarter On Its' Edge, was published in 1979 and his most recent, The Uncertainty of Everything from Burnt Wine Press in 2011. His forthcoming title Blue Movies For Blues Players or Sonnets For The Eternally Sad, will be out this fall from Pooka Press in Vancouver. He blogs at http://michaeldennispoet.blogspot.ca/
Posted by rob mclennan at 1:16 PM

Email ThisBlogThis!Share to TwitterShare to FacebookShare to Pinterest
Labels: Michael Dennis, On writing