I was waiting for my small intestine reattachment surgery in January 2011. I was in the corridor in front of operating room # 3 at the Ottawa General Hospital along with the garbage cans, the brooms and cleaning products. It was a narrow hallway. I felt a wee bit squished on my stretcher, all gowned up, my hair in a surgical cap. My surgery was supposed to take place at noon; it was now 12:30pm. I had been in the hospital since 9am. First in the surgical waiting room, then in another interior waiting room, then in the corridor. I hadn't eaten for twenty four hours. A pragmatic person, I was expecting it to take awhile. But I was very nervous.

To distract myself, I composed a sonnet, a bit of a parody of the whole experience counting syllables on my fingers and trying to remember the line before. In the middle of line two or three, a janitor left my operating room holding a broom and sweeping up a batch of very dark, very voluminous hair. I was worried that they had operated on a bear before my surgery. No wonder it was taking so long. They had a lot of clean up to do.  I worked on my sonnet. Eventually at about 1:30pm the anaesthesiologist arrived and on with the show or as he put it…"the bar is open." The operation took five hours. It was gruelling but successful. The sonnet, however, died on the operating table.

In November 2009, when I was in ICU apparently fighting for my life (although I had no idea), my husband read poetry to me. He read from a favourite recent anthology from my book shelf:  "American Hybrid:  A Norton Anthology of New Poetry," edited by Cole Swensen and David St. John (W.W. Norton, 2009).

I have a habit of dog-earing poems in books when I like them. So he read those poems to me. He read Ralph Angel's "Soft and Pretty: You don't even know how old/and black my blood is…"  He read, with some irony me thinks, from Joshua Beckman's poem "Your Time Has Come; Cal Bedient's poem "Insatiabilty": "For every angel/a preposition." And more.  The nurses, orderlies, janitors, physical therapists and residents mused about them. They didn't understand what they meant. Had I been awake I would have responded that what mattered to me were cadences, rhythms, imagery, micromovements, a wee slice of an instant, tiny revelations that worked like electricity across skin and seeped into bone and blood.

During my health crisis, friends were very concerned and caring. I was touched later when I learned just how concerned and how helpful our friends had been. I could write a lot and have about the unexpected kindness of those who drove my husband to the hospital or brought him groceries or cooked him dinner or simply let him spend time with them to just be and later visited me. But relevant to this topic is the people who sent books, specifically books of poetry. One of those was a young man named Cameron Anstee, a very energetic young man, who runs a prolific small press called Apt. 9. I can't even count how many chapbooks he's published now, beautifully made works, meticulously put together and hand-sewn books by both emerging and established poets. One of the poets he's published, who  my husband and I have also published through our micropress AngelHousePress is Ben Ladouceur, a brilliant young poet who graduated from Carleton University.

Cameron generously sent me copies of a few of the chapbooks he'd published that fall. My husband decided to read me one of them, "The Argossey " by Ben Ladouceur. The poem suite was touching, fascinating, imaginative, witty and humorous. It concerned Odysseus' dog who was waiting for his master to come home. Later when I was home again, after my own odyssey, complete with dark hallucinations and dangerous sirens, I read the poems back to my husband and both of us grew teary-eyed.

My husband doesn't normally read me poetry, but in this case, he had been told that a patient on the ventilator under sedation can be calmed by the sound of a familiar voice.  I was in the ICU for two weeks, sedated, feverish, not able to speak or move. So he read me poetry. Poetry that I loved. And apparently when he read it to me, I did indeed calm down. There were a plethora of monitors and machines to confirm that the poetry made me less agitated.

When I was awake and out of critical condition, I was transferred to the seventh floor. I had a number of cards, letters, gifts and books waiting for me, thanks to the thoughtfulness of those caring friends who mailed or hand delivered packages to Charles when I was in ICU. But I wasn't really that capable of reading for very long.  I was still weak, couldn't hold up a book for more than a few minutes at a time, and had a short attention span. For another week I was still too frail to get out of bed at all and subsequently I had to have the aid of a walker for another few days until I was shaky but mobile again. I was in hospital for a month.

Catherine Owen, who had read at the Dusty Owl Reading Series while I was sick and stayed at our place, sent along her book "Frenzy" (Anvil Press, 2009). It opens with another set of myths, the stories of Persephone and Eurydice. I could read only one poem at a time and then I lay back and mused about my own trip back from the underworld: "some journeys always stay the same. like the one where/Demeter goes to the underworld or Eurydice looks back…" "where the beauty/ is dark and free as a pomegranate seed whose promise/is an old woman pacing lonely and fierce in her once/wild-flower passions…" (Aunt Dilys).

I am the last person to rabbit on about the therapeutic value of poetry. I don't really need poetry to have some kind of function in society. I don't really know what my point is here except to say that these small acts of poetry helped me through a very difficult time.

I guess a poet's goal is supposed to be to disseminate and read work to a broad audience, including numerous strangers, and that makes sense to me; however, for me, what matters most is the community I am in. I feel nurtured and supported by open minded and like minded people. This caring and supportive community is one of the reasons I dare write anything, dare share my work. Dare to work hard at what I do. I am so fortunate to be surrounded by good people: hard-working and driven small press publishers, talented poets, artists and musicians whose books, chapbooks, visual art and music I admire and enjoy. I love being part of a community of creative and caring friends. They are my family. 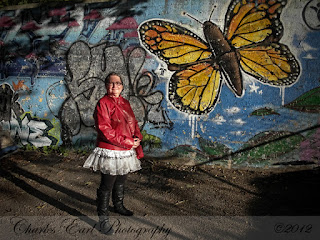 Amanda Earl [photo credit: Charles Earl] is a poet, pornographer and small press publisher. Her poetry has been published in three chapbooks by above/ground press, the most recent being Sex First & Then A Sandwich (2012). Her poetry and visual poetry have also been published in chapbook form by Puddles of Sky Press, Laurel Reed Books and Book Thug and in online chapbooks by the red ceilings press and avantacular press and in the This is Visual Poetry series by Dan Waber. Her poems appear both online and in print in Australia, Canada, France, the UK and the USA. Talk to Amanda on Twitter @KikiFolle or read about her in secret at AmandaEarl.com.
Posted by rob mclennan at 10:34 AM

Email ThisBlogThis!Share to TwitterShare to FacebookShare to Pinterest
Labels: Amanda Earl, On writing

This is a fine account, Amanda - thanks for writing it - I wasn't that aware of the whole ordeal you've been through, but I'm real glad you're ok now!
John bennett

May good healing energy come to you, Amanda.