A little less inspiration, please
(Or, What ever happened to patrons, anyway?)
Anita Dolman

Oh, the bucolic life of a poet. Sleeping in every day to the sound of birdsong, reading in bed, perhaps arranging coffee or lunch in the city with an equally literary colleague. Then, when the mind is properly primed with artistic influences, creative thoughts and insightful reflection, sitting down in a quiet room to do some writing, reconsider one of last week’s poems, then write some more before, finally, checking your messages to find out where your words of beauty and wisdom have most recently been accepted, how much money the publishers will be offering you, and who, this week, would like you to come read to their expectant audience of You-enthusiasts.

This is what I imagined when I was a little girl and, from what I hear at my five-year-old’s school, is often what many grown-up (or, at least, tall-as-they’re-going-to-get) non-writers consider life must be like for those of us on the other side of the pen.

It is, of course, about as ridiculous as thinking the pen itself has organized a way to pay the bills, clean the bathroom, bake a cake for your in-laws, fix the kitchen drawer, fill out the tax forms, find a place to stick your child during next Friday’s PA day, call your mother, call an accountant because you’ve given up on filling out your own tax forms, make a grocery list so you can go to the store after your son is in bed tonight, do laundry, scribble down that one line you managed to think of before your shower ran out of hot water—assuming you still remember it, but at least you got to shower today, so stop complaining—make coffee, think about giving up, make some more coffee, make dinner, and, finally, figure out where to buy a replacement kitchen drawer, because it turns out you are either a lot stronger or a lot more frustrated than you thought you were and it is now a small heap of painted wood lying on the kitchen floor, wrenched nails poking up like a guerilla warfare trap, while you stand there still holding the antique-bronze handle and counting to ten very, very slowly.

But don’t worry; your loving and supportive spouse has called from his evening job to rescue you. Oh, no, wait. It’s not to rescue you; it’s because he needs love and support, too. His boss has refused his vacation request, a bottle fell on him from a top shelf, and (remember, now: all your friends told you not to marry a fellow writer) he’s frustrated the contract still hasn’t arrived for the anthology he was accepted for three months ago, and has he mentioned lately how hard it is to get any time to write?

Luckily, the bottle was just a Canadian merlot. It only grazed his left shoulder, but, of course, that’s the one he pulled this week when your son jumped on top of him while he was vacuuming the living room. Oh, and he’s heading to the pub after work, so he’ll be home late tonight, because—and who could blame him here—not only is he having a bad day, but you sound rather . . . angry… instead of calming and soothing like the wedding vows promised him you would be when he needed you.

You understand his decision, though; between a beer and you, you’d take the beer right now, too, if you could.

And, say, speaking of escape, exactly where the #$@% is that quiet room you were supposed to have, because the one you’re in has a phone that won’t stop ringing (how would you even know if your air ducts needed cleaning, and if they did, is there seriously no one closer than Pakistan who can make it happen?), a pot that just bubbled the perfect amount of milk onto your stovetop to require exactly 10 minutes of hard scrubbing later to remove, and a five-year-old who has decided his new career aspiration is to grow up to be in a revival of Stomp!, for which he is currently practicing on your hardwood floors with his winter boots on.

While you take a deep breath to help you process how best to deal with the chasmic distance between your lifestyle and anyone’s idea of bucolic, you realize that the cat has had another furball in a mystery location, which you are able to detect clearly by smell, if not yet at all by sight.

Oh, look, she had it on your late grandmother’s tea towel, which she somehow managed to tug off the hook, tearing it only slightly in four locations before covering it in wet, hairy vomit.

On the upside, now that the mystery of the hidden throw-up has been solved, you may—after dinner but before your husband gets home late and you race to the grocery store to put the week’s groceries on credit before the suburban busses stop running at 10:30 p.m.—be able to submit some of the 12 poems and three short stories you’ve had rejected this week.

Maybe you should try that new magazine that three of your equally “literary” friends have recommended to you, based on the sincerity of its rejection notices (the editors say “Sorry” right in the first sentence!). Sure, the magazine is online-only, and it doesn’t pay, but one of the board members has some prestige, so it could go on to be something, assuming it’s still around right now, which you’ll need to check first.

Of course, that means you won’t be able to dust the house before your in-laws come for coffee tomorrow, but for god sakes, you baked them a cake, and their grandson is the best reader in his class, even if he does get in trouble at school for talking down to his teacher (your husband and you are starting to seriously worry that, dancing aspirations aside, he may become a writer; oh, please, please, Universe, let him become an architect or a geologist or a circus performer instead).

Say, where the hell is he, anyway? And what’s that pinging sound in the laundry room?

Maybe you can write next week. 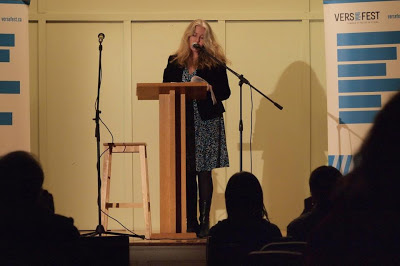 Anita Dolman [photo credit: Pearl Pirie] is a poet, fiction writer, editor, mom, wife, friend, daughter and volunteer living in Ottawa. Her poetry and/or flash fiction has appeared in journals, websites and magazines throughout Canada and the United States, including The Antigonish Review, Ottawater, Geist, The Storyteller Magazine, One Cent, PRISM international, Utne, The Fiddlehead and Grain, and in the anthology Decalogue: ten Ottawa poets (Chaudiere Books, Ottawa, 2006). Her flash fiction will also appear in the anthology Postcards from Nowhere (Quarry Press, Kingston) in summer 2013. Attempting to simultaneously complete a manuscript of short fiction and function as a human being, she is trying to reconcile a nonlinear philosophy of time with the realities of her wall clock’s incessant and irritating pointing at numbers.
Posted by rob mclennan at 1:48 PM

Email ThisBlogThis!Share to TwitterShare to FacebookShare to Pinterest
Labels: Anita Dolman, On writing

Very well (sadly) put. Good luck with finding time for writing - your work is definitely worth it.