On Writing and Transformation
Ariel Dawn

When my father was dying I wrote him a thank you poem. Our relationship was difficult, full of silence and misunderstanding. I was born with a loud voice that shrank to a whisper as I grew older. When I spoke he couldn’t hear, so demanded I speak louder, clearer, until I was choked with tears. Writing was the only way to express myself, and as my poetry exposed my rage and disorder, he destroyed it. This made me burn to write more, and made me careful, religious, about the power of words. I edit obsessively, and even the smallest note is rather serious, intimate, revolutionary. I fight not to be as oppressive and perfectionistic as my father, yet I admire his writing. Strange and lyrical, his personal letters often met with silence, for they suggest a secret life. While I was ill with anorexia and he was in Russia, we wrote to each other and he heard and accepted my words. It is here we finally met, between worlds, through a secret correspondence. As for the poem I wrote when he was dying, I sent it in an email, and days later he replied that he kept printing it out because each time he’d destroy it with tears. Of course I don’t believe in death, only transformation. Most of my poems are written with ghosts, about moments that live on to be reborn into the present and the future, though I don’t believe in time either. When he died Benny Goodman’s "Sing Sing Sing” played and I read my poem and he held my hand and kissed my eternity ring. 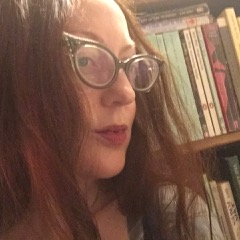 Ariel Dawn’s prose poetry recently appears in G U E S T [a journal of guest editors], Train: a journal of prose poems, dusie: the tuesday poem, talking about strawberries all of the time, and Coven Editions Grimoire. She writes with Tarot cards and oracles and lives in Victoria, British Columbia.

Email ThisBlogThis!Share to TwitterShare to FacebookShare to Pinterest
Labels: Ariel Dawn, On writing