I dislike my voice—its thinness, its high-pitched reediness, its occasional strange inflections. When I was a small child, my Kentucky school district sent me to a speech therapist for a few months to iron out some defect in my enunciation. Part of the treatment involved recording and listening to myself talk on a cassette. The sound of my own voice horrified, humiliated, and embarrassed me. To some extent, it does so to this day.

I never wanted to “find my voice” in poetry, but rather to escape my physical voice. The voices of the poets I admire are always in my ears, utterly distinct one from another, each as immediately recognizable as a few bars from a great improvising musician or a passage of brushwork from a beloved painting. But I never aspired to attain a consistent voice—though I’ve always believed that poetry was an affair first and foremost of voices.

Of course, “voice” in a printed poem—rather than an audio recording—is a metaphor. It’s not a literal sound, but a congeries of diction, characteristic rhythms and turns of phrase, habits of combining word-sounds in particular ways. Even when they are each writing blank verse, one never mistakes the voice of Tennyson for that of Swinburne; one knows Mina Loy’s free verse from that of William Carlos Williams as much by its sound as by its subject.

As I write, I don’t imagine myself speaking my poems to an audience, though I do sound each passage in my head, repeatedly. They come in brief bits—lines and stanzas, sometimes groups of a dozen or more lines. I try to write to some kind of “tune,” however atonal. Only very rarely do I have any idea of where I’m going, or where in the poem a given passage might eventually fall. “I” almost never speaks: instead, I imagine voices who might be saying the lines, voices whose power, resonance, or tenderness of address surpasses what my own voice might muster. Or voices whose anger, affection, resentment, or sense of hurt far outreaches what I’m conscious of feeling. Bureaucratic voices, voices overheard on the streets or in the subways, voices of friends or loved ones.

I have no set schedule or routine for working at my poems. Old enough to remember the typewriter, a fetishist of fountain pens, I resist keying my words into electronic documents: somehow it “freezes” them, makes them resistant to further alteration. I jot down lines in notebooks when they occur to me, add to them when it seems they have something more they want to say. I copy them over, adjusting, cutting, adding, from notebook to notebook and back again. I gather little bundles of them, hoarding them against a dry spell. I try to hear the echoes between disparate passages, the potential counterpointing.
These fragments eventually fall into clusters, are stitched or soldered into poems: “He do the police in different voices”—which sounds pretty familiar. It’s patchwork, or collage, or bricolage, or simply a heap of things that make a shape or gesture that feels comely to me, or interestingly awkward. My poems speak for no one, least of all myself, but I suppose no one else can take responsibility for them. Hier stehe; ich kann nicht anders. 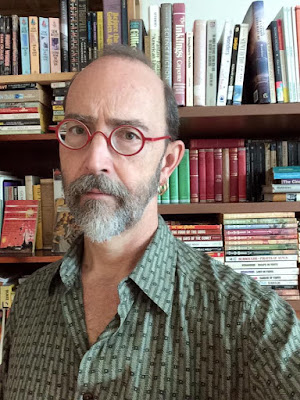 Mark Scroggins is the author of four books of poems: Anarchy, Torture Garden: Naked City Pastorelles, Red Arcadia, and Pressure Dressing. His most recent collection of criticism is The Mathematical Sublime: Writing about Poetry, and he has recently edited Our Lady of Pain: Poems of Eros and Perversion by Algernon Charles Swinburne. He writes regularly for Hyperallergic.

Email ThisBlogThis!Share to TwitterShare to FacebookShare to Pinterest
Labels: Mark Scroggins, On writing