We Who Are About To Die : O Mayeux 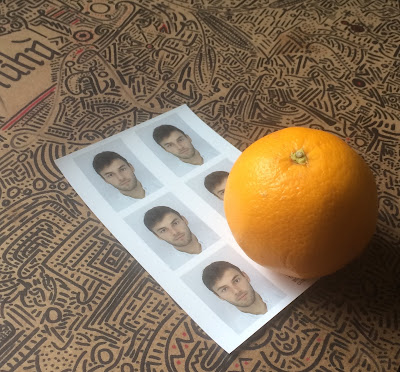 Where are you now?
a monastery on Lesbos, island home of Sappho

What are you reading?
last night: The Adults in the Room by Yannis Varoufakis

this morning: Anne Carson's translations of the Sappho fragments ; Julian Talamantez Brolaski's 'Of Mongrelitude' ; poetry-in-progress by my partners-in-crime Tanner Menard (https://tannermenard-blog.tumblr.com/) and Jack Westmore. we send each other fresh poems most days.

What have you discovered lately?
a secret spot to stargaze with just the sounds of grass

Where do you write?
in my mind ; a desk in the sun ; old receipts ; phone ; notebook beside the bed (for dreamt poetry)

What are you working on?
putting the finishing touches to a chapbook of poems in English and Louisiana Creole, an endangered language which is the topic of my doctoral research and also my own heritage language

Have you anything forthcoming?
a couple of poems, including one in 'Strange Horizons'. it's very exciting to be published in a journal you have been reading for a long time. speculative/sci-fi/fantasy poetry is seducing me and more and more every day. i am also thrilled that my first full-length collection--'Artefacts', a computer-generated asemic cycle--will be published this autumn by Michael Jacobson's Post-Asemic Press (http://postasemicpress.blogspot.co.uk/).

What would you rather be doing?
really couldn't think of anything at all

A several moved color, wrestled
to the ground color and taken ri
ghtly tightly at the neck with grip

As if by law a just complete occlusion
of the carotid arteries, call up skyward,
remembrance of the market at Badagry

Appeal to authority that it might descend
and find a sense when callous shades cut
at each other: urbanized, raw & jealously

Attack attack attack the walls and raise
the bloodied flag, the flag which looks
down starry-eyed from high as a kite 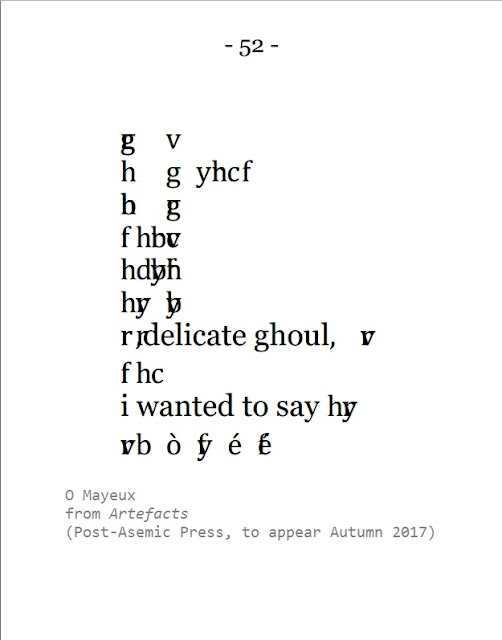 Email ThisBlogThis!Share to TwitterShare to FacebookShare to Pinterest
Labels: O Mayeux, We Who Are About To Die