On Writing and Wandering
Frances Boyle

Writing for me is fumbling around in the dark, tripping over things, bruising my shins. Going by feel—the cool smooth lines of a lamp, or the shape of a window. Assessing, with fingertips or palms, differences in texture between the flat glass of a screen and the flat wood of a desk top.

Stumbling, cracking, trying. Writing must be failing because succeeding is a dusty-hazed apparition somewhere on the horizon. To say what you mean when you’re not sure you have any sense of meaning, either ‘what it means’ (definition) or ‘what I mean to do’ (intent).

To write, especially poetry, I often need to trick my mind—my nattering monkey mind—into letting go so I can sidestep conscious intent, force myself out of the way. Sometimes freewriting or prompts have resulted in me tapping into a vein of memory, so images and sensory impressions—the tastes, textures, sounds and smells—begin to flow, build up in pastiche. On putting pen to paper, I had no intention that I’d write, for example, about the personal impact of Montreal’s École Polytechnique massacre, or being stood up by a boy on Christmas Eve, but quite unrelated lines by other writers led me to these poems. If I had made a deliberate decision to write about those subjects, I’d mostly likely have ended up with stiff and stilted drivel that I would have discarded.

Other times, what flows is a mess of jumbled images that seem to add up to situations that have nothing to do with me, experiences—sometimes dark and rumbling—that aren’t mine. I may be drawing on my subconscious, tapping into the collective unconscious, or maybe just filtering dredged-up film or book images. While I don’t really understand, I’ve felt mystified, sometimes amazed at the scenes that shape themselves out of the flow.

I never seem to be able to direct this flow, however, and I have been troubled by my lack of intent in writing. But more recently I’ve been more certain that my process will bring me someplace interesting. Wise mentors have said that intent comes afterwards, as you shape the poem, and that starting out with a particular intent can prevent the writing from going where it must.

I felt the need for intent, I think, because my mind is tuned to logic, which makes sense given a long career as a lawyer-scribe. People generally see lawyering as the antithesis of the creative life, but much of my legal career involved writing and rewriiting. I was valued as much for being able to create a cogent summary and analysis as for any of the other lawyerly skills in my toolkit. I never did any courtroom work, but spent decades documenting agreements for loans, business succession, etc. and synthesizing policy decisions from discussions at long meetings.

A senior executive at my workplace once joked that my drafting ‘was poetry’. But it seemed to me that it wasn’t totally a joke, that such ordering of chaos is not dissimilar to what we do when writing creatively. A lawyer colleague told me she could never write poetry. I disagreed with her, pointing out that the way she debated a single word almost to the point of stasis was very much like poets’ striving for ‘the right words in the right order’. They’re both about precision of language.

I was reluctant to self-identify as a lawyer, partially because it was always a job and never a passion (unlike friends who do social justice work, who I consider to be the real lawyers).  I didn’t live and breathe the law, so felt a bit of a fraud. I may equally be a fraud as a writer. I am far from as well-read as I’d like to be—too many books on my shelves waiting to be read (though I can’t help acquiring them), too many writers whose work I haven’t even experienced. I recognize myself as a perennial beginner and that may allow me to approach all my writing with a certain humility.

This quasi-essay is typical of my maundering process (pause to check the dictionary to ensure a word I use all the time actually means what I believe it does). To think about writing is to enter into a dense forest, assuming that a gap between trees is the start of a path but soon discovering that you’re snagged on stubs of branches, tripping over underbrush. The breaking through into a clearing, then more stumbling and crashing before a breakthrough into the same clearing, as in T.S. Eliot: “We shall not cease from exploration / And the end of all our exploring /Will be to arrive where we started / And know the place for the first time.”

A different analogy: writing as ‘peristalsis’ (another stop at the dictionary to be sure): slow digestion, of words and images, literally gut-wrenching, ideas in gelatin or in amber.

I’ve just returned from a week-long writing retreat where one of the writers had suffered unspeakable tragedy just a few days before, but made the decision to come to the retreat anyway because she deeply believes in the healing power of poetry. Writing that delves into the depths of pain and grief is more than heart-felt, it is gut-felt; we (or at least I) feel an icy quiver in my stomach when the words resonate.

Writing about writing can include much agonized (literal) belly-aching about what writers can and should do in this world of alternate truths and legitimate fear, of communities divided among themselves. Why and indeed how to write our little scrap of something, a post-it note missive as true as we can make it, and to stick up on a vast billboard, one of a zillion little yellow tongues flittering in the breeze. 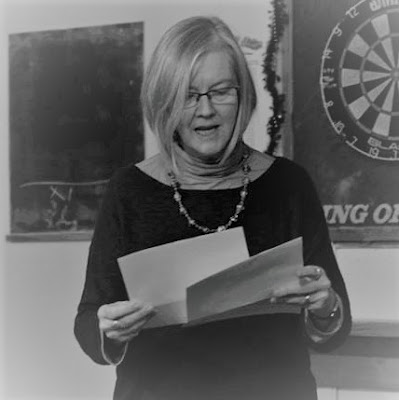 Frances Boyle [photo credit: Stephen Brockwell] is the author of the poetry collection, Light-carved Passages (BuschekBooks). Her poems and short stories have appeared in literary magazines and anthologies throughout Canada and in the U.S. Awards for her writing include This Magazine’s Great Canadian Literary Hunt, the Diana Brebner Prize and Tree Reading Series’s chapbook contest. She is a member of the editorial team for Arc Poetry Magazine.
Posted by rob mclennan at 10:01 AM

Email ThisBlogThis!Share to TwitterShare to FacebookShare to Pinterest
Labels: Frances Boyle, On writing

I found your words on the relationship between your creative writing and your legal writing especially resonant. Thanks for this Frances!

Thank you Frances...what a wonderful insight you have offered here.

Thoroughly enjoyed this read Frances. Nancy was good enough to forward to me.

Hello Frances -- I was delighted to meet you at Barbara Sibbald's book launch, and so was eager to read what you had to say about writing. I found it honest, insightful, and inspiring. Thanks so much for expressing these complicated ideas so beautifully. I am looking forward to reading your book of poems. Cheers....

Your piece on writing resonates with me in a number of ways. I can't count the number of times I hesitate as I start to define a word I use regularly only to rush off to the dictionary, suddenly unsure I actually know the word. The kind of mind that needs a nudge to take it outside the internal nattering that gets in the way, trying to impose logic where logic is not helpful. I can only hope to reach with my writing, the levels of wonder you generate in your poems, those wonderful poems I covet, the ones I wish were mine! Well done, Frances!