On Writing: In Search of the Greengage Plum
Carla Funk

Some meditate cross-legged in a yurt. Some breathe the deep Om and yoga their way to transcendence. Some listen at the window for Rumi to drop a high and dervish thought into their cracked-open consciousness. At least, this is what I imagine some do to prepare the way for words that sizzle and glow. I do none of these things. Never have. Likely never will. But I do walk every morning—trails, sidewalks, paths in forests and around the nearby lake— with lit-up expectation that I will bear witness to something miraculous, that truth and beauty will slip out from behind the veil, appear in who knows what costume, as what image, what scent, what peculiar roadside thing, and stage-whisper—like a revelation of glittering eternity— ta-da!

I was nearly home, walking on the Goose, a well-traveled pedestrian trail, when I spotted a red mobility scooter parked in the lane, and just ahead of it, a squat, silver-haired man in a plaid shirt and denim overalls bent over the jutting limb of a small fallen tree, debris from the last night’s April windstorm.

He waved a pocket-saw over his head. “Cleanin’ up the trail. Git over here, and gimme a hand, why don’t ya.”

I joined him at the tree branch, and braced it as he finished sawing it into lengths. Then we chucked the pieces of wood off the trail and into the brush.

“You live around here?” he said. When he spoke, his mouth flashed gold—a shiny crown on one of his upper teeth.

I lived around the corner, I said. How long, he wanted to know, and so we talked about the neighbourhood, what used to be here, the RV park where he lived now, his scooter route to Timmy’s for coffee every morning, how long his battery kept a charge, that snake he saw not even two weeks ago when it tried to strike a dog—oh, he pinned that thing with his cane, then flung it off the trail—and the farm just down the road, soon to open for the season.

“That farm sell food?” he said. He ran his tongue over his teeth, over that glinting gold tooth.

I ran down the list of what grew there—potatoes, apples, Walla Walla onions, raspberries, broccoli, squash, and corn.

“Can’t eat the corn no more.” He shook his head. “Had the cancer. In the colon.” He patted the lower left side of his round denim-covered belly. “Got me the bag now.” He settled himself back on his scooter. “But if I could get me some greengage plums,” he said. “Haven’t had ‘em since I was a kid on P.E.I. My dear ol’ mum made greengage preserves.”

He closed his eyes, sighed. He shook his head. “Mmm—mmm. Nothing like the taste of the greengage plum.” He leaned forward over his handlebars and squinted at me through his dark-tinted glasses. “Think you can find me some greengages?”

Though the man was nearly a stranger, I said I’d try. And if I found some, I’d let him know.

“Name’s Dean,” he said. “You can find me at the RV park. Ask at the main office.” Then he motored away, tooting his horn as his scooted.

And I did try. I talked to the farmer down the road, to friends with fruit trees. No luck. I read up on the greengage, where it grew, the chalky clay terroir required for prime cultivation, the sun and heat needed to sweeten it. I learned of a farm in the Okanagan that used to grow greengages, but no more. Yes, their syrupy sweetness was unrivalled in the realm of plums, but they were too fussy a tree for market, too unpredictable in their yield.

I kept walking the trail where I’d met Dean. Greengage Dean. Every so often, he’d zoom by on his red scooter, honk, wave, but not seem to recognize me as the woman who helped him clear the trail, the woman now engaged with his greengage, on the hunt for, in search of.

Summer came, and with it, the farmer’s raspberries and potatoes, corn and apples, friends’ prune plums and red plums. The greengage faded, not fully, but enough that I no longer looked for it or asked about it. The greengage belonged to someone else’s mythology and nostalgia.

But then—as it is with ideas, with inklings and images and questions that won’t let go, with a poem whose final line will not, cannot be wrought, with a story whose plotline refuses to unsnarl, with a title that won’t emerge with clarity and metaphoric heft and unifying force—the elusive and mysterious and hidden came suddenly into view. There, illuminated by late evening’s low sun, across the road from our house, just down by the vacant house with the rotting fence, growing up from the far side of the ditch, a tree—a tree leaning and loaded with plums, some of them so ripe, they’d split and oozed a sticky syrup, some of that sugar hardened into what looked like tiny icicles dripping off the bottoms of the fruit.

I nearly walked past the tree without noticing, but then, a breeze lifted its perfume, and before I saw it, I smelled it. The greengage plum. As in the photographs, dusty and greenish-gold. I plucked one from a low-hanging branch and bit in. Honey. And butter. And caramel. And the sun poured into a wineglass. And the mock orange bush with its showy blossoms. And a picnic in a field of wildflowers in the French countryside, beside a river. And a river flowing toward the ocean, and the ocean around an island, and on that island, a dark red dirt that feeds the roots of trees that grow up flush with sun and fruit, and in one tree, a child who leans out to pluck from a leafy branch one fat gold plum, who bites in, closes his eyes, lets the juice run down his chin, who tastes yesterday, today, and tomorrow in that single mouthful, who witnesses one more secret of the intricate world undone, unhidden, and—ta-da!—laid beautiful and bare. 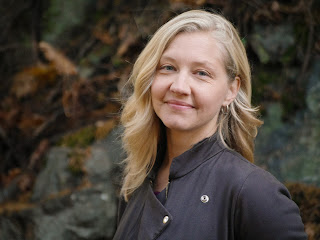 Born and raised in Vanderhoof, BC, Carla Funk lives and writes in Victoria, where she taught for 15 years in the Department of Writing at UVic. She served as Victoria’s inaugural poet laureate (2006-2008), and helped to promote the literary arts in the city. Gloryland (Turnstone Press, 2016) is her fifth book of poems. She is currently finishing up a creative nonfiction collection about childhood, God, loggers, and small town imagination.

Email ThisBlogThis!Share to TwitterShare to FacebookShare to Pinterest
Labels: Carla Funk, On writing

A lovely piece of writing from a talented poet. Carla's potential is great. She understands that all good writing is concrete. LeRoy Peach Cape Breton.

So many delightful phrases.

Writing that slips along like water over rocks, eddying in ways both surprising and familiar.

writing that is so very lovely. Thank you.