On Writing the Truth
Ryan Eckes

For Brecht, truth can be a weapon if a piece of writing illustrates the causes of barbarous conditions. He asks, “how can anyone tell the truth about Fascism, unless he is willing to speak out about capitalism, which brings it forth?” His description of those who aren’t willing calls to mind American liberals who cling uncritically to the Democratic Party: “Those who are against Fascism without being against capitalism, who lament over the barbarism that comes out of barbarism, are like people who wish to eat their veal without slaughtering the calf.” Yes.

In the US, where the working class has no voice in government, the Democratic Party continues to act as a roadblock to social justice. Most large unions forfeit their power to this party; their leaders rarely even mention the word “capitalism”, the very thing that divides and crushes us. Instead, since the election, we hear messages like “stop the normalization of hate”, as if hate hasn’t been normal for the entire brutal existence of the country, as if racism hasn’t been sustained by capitalism. I think writers need to undermine capitalist narratives peddled by liberal institutions however we can. It’s not enough to simply counter right-wing narratives. We need to show the relations between these narratives. Class war is always made invisible. Wars on women, on people of color, on LGBTQ people are always made invisible. So let’s make it visible. I imagine poets, journalists, essayists, fiction writers contributing to an infrastructure of disobedience and solidarity that people are already building.

Because we live in a media-saturated world, Brecht’s 4th and 5th difficulties strike me as most difficult right now—how best to disseminate the truth? Brecht points out an obvious problem: “The writer thinks: I have spoken and those who wish to hear will hear me. In reality he has spoken and those who are able to pay hear him.” Where does our writing exist? In journals? in newspapers? on buses? on walls? on sidewalks? in cafes? in workplaces? in people’s mouths? in people’s ears? What specific audiences do we have in mind, and why?

Vijay Prashad, in an interview with Mark Nowak, defines “socialist writing” as that which comes from listening and interacting with people who are ultimately your audience but not necessarily your customers. Citing Antonio Gramsci, Prashad suggests that socialist writing elaborates on the “common sense” of a people and produces continued conversation and interaction. This model partially addresses the difficulty of spreading the truth. As a poet, I like the idea, and to poets who are used to writing within a community, this idea might sound obvious. But like everyone else, poets’ social circles are often determined by education, class, race. The severe stratification and compartmentalization of society—a society in which our individual identities are sold to us endlessly—makes spreading the truth that much more difficult.

We should work to make sure our writing isn’t always funneled to predictable venues. The internet isn’t as democratizing as we may think, and we cannot rely on its stability and accessibility. We can be imaginative with print and performance. We can be helping to construct a public, feeding networks of solidarity.

Beyond telling the truth, writers have to keep inventing a world we want to see. And we have to keep attempting to live it, especially in the face of despair. Prashad explains why this is so critical:

“One of the things that has become clear to me is that once human beings surrender to the present, the idea of the future wears thin. There is only a present. The present stretches on into infinity. When we say tomorrow, we mean only tomorrow in time, but not in epochal terms. Tomorrow will look like today. The sensation of an endless present greets us each day. Change is never going to come.

That feeling — of futility — is the greatest detriment to the socialist imagination. Socialist writing, to my mind, has to help break that fatalism and create what Arundhati Roy calls ‘a new imagination’ — an imagination of a different kind of world, with different priorities and different sensibilities.”

Practicing this new imagination is necessary to help each other continually overcome the difficulties that Brecht points out, difficulties which won’t disappear.

Lately I’ve also been listening to James Baldwin’s speech “The Artist’s Struggle for Integrity” (1963), which deepens the urgency to identify and articulate the truth. After expressing his distrust of words such as “integrity” and “courage” for their imprecision, Baldwin states that our words are

“attempts made by us all to get to something which is real and which lives behind the words. Whether I like it or not, for example, and no matter what I call myself, I suppose the only word for me, when the chips are down, is that I am an artist. There is such a thing . . . The terrible thing is that the reality behind these words depends ultimately on what the human being (meaning every single one of us) believes to be real. The terrible thing is that the reality behind all these words depends on choices one has got to make, for ever and ever and ever, every day.”

I recommend listening to the whole thing. 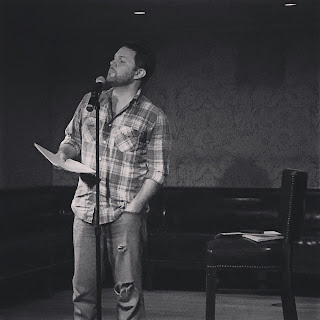 Ryan Eckes is a poet who lives in South Philadelphia. His books include Valu-Plus and Old News (Furniture Press 2014, 2011). You can read some of his poems in Tripwire, The Brooklyn Rail, Slow Poetry in America Newsletter, Supplement, Public Pool, Whirlwind and on his blog. He is the recipient of a 2016 Pew Fellowship in the Arts.
Posted by rob mclennan at 10:04 AM

Email ThisBlogThis!Share to TwitterShare to FacebookShare to Pinterest
Labels: On writing, Ryan Eckes

Well said, Ryan. Thanks. You give me hope.