On Writing from the New Oceania
Craig Santos Perez

from excerptus: “pluck out” from ex- “out” + carpere “gather” or “harvest”

From also indicates an excerpt or a passage quoted from a source. My own passage and migration from Guam to California often feels like living an excerpted existence; while my body lives here, my heart still lives in my homeland. Poetry is a way for me to bring together these excerpted spaces via the transient, processional, and migratory cartographies of the page. Each of my poems, and each of my books, and seemingly every breath I take, carries the from and bears its weight and incompleteness.

The imagination is an ocean of possibilities. I imagine the blank page as an excerpt of the ocean. The ocean is storied and heavy with history, myth, rumor, genealogy, loss, war, money, the dead, life, and even plastic. The ocean is not “aqua nullius.” The page, then, is never truly blank. The page consists of submerged volcanoes of story and unfathomable depths of meaning.

An individual book is an island with a unique linguistic geography and ecology, as well as a unique poetic landscape and seascape. The book-island is inhabited by the living and the dead, the human and the non-human, multiple voices and silences. The book-island vibrates with the complexity of the present moment and the depths of history and genealogy, culture and politics, scars and bone and blood.

A book series is an archipelago, a birthing and formation of book-islands. Like an archipelago, the books in an ongoing series are related and woven to the other islands, yet unique and different. Reading the books in a series is akin to traveling and listening across the archipelago.
Because Guam is part of an archipelago, the geography inspired the form of my from unincorporated territory book series. Additionally, the unfolding nature of memory, learning, listening, sharing, and storytelling informed the serial nature of the work. To me, the complexity of the story of Guam and the Chamorro people — entangled in the complications of ongoing colonialism and militarism — inspired the ongoing serial form.

The first book of the series, from unincorporated territory [hacha] (2008) focused on my grandfather’s life and experience on Guam when the island was occupied by Japan’s military during World War II. The second book, from unincorporated territory [saina] (2010), focused on my grandmother’s contrasting experience during that same period. The third book, from unincorporated territory [guma’] (2014) echoes and enlarges the earlier books through the themes of family, militarization, cultural identity, migration and colonialism. Furthermore, [guma’] focuses on my own return to my home island after living away (in California) for 15 years. I explore how the island has changed and how my idea of home has changed. I also meditate upon the memories that I have carried with me, as well as all that I have forgotten and left behind.

The titles are meant to mark and name different books in the same series. Just as an archipelago has a name, such as the Marianas Archipelago, each island of the archipelago has its own unique name. The names can be translated as [one], [elder], and [home]. My first book was given the name, [hacha], to mark it as the first book, first island, first voice. While one might expect the second book to be named, second, I chose the name, [elder], to resist that linearity and instead highlight genealogy, or the past. The third book, which means house or home, was an attempt to weave together time and space (the house or book as spatial and temporal). The fourth book, from unincorporated territory [lukao] (forthcoming, 2017) includes themes of birth, creation, parenthood, money, climate colonialism, militarization, migration, and extinction. The Chamorro name of the book, [lukao], means procession.

My multi-book project also formed through my study of the “long poem”: Pound’s Cantos, Williams’ Paterson, H.D.’s Trilogy, Zukofsky’s “A,” and Olson’s Maximus. I loved how these books were able to attain a breadth and depth of vision and voice. One difference between my project and other “long poems” is that my long poem will always contain the “from,” always eluding the closure of completion.

I also became intrigued by how certain poets write trans-book poems: such as Duncan’s “Passages” and Mackey’s “Songs of the Andoumboulou.” I employ this kind of trans-book threading in my own work as poems change and continue across books (for example, excerpts from the poems “from tidelands” and “from aerial roots” appear in both my first and second books). These threaded poems differ from Duncan and Mackey’s work because I resist the linearity of numbering that their work employs.

I use diagrams, maps, illustrations, colalge visual poetry as a way to foreground the relationship between storytelling, mapping, and navigation. Just as maps have used illustrations (sometimes visual, sometimes typographical), I believe poetry can both enhance and disrupt our visual literacy.

One incessant typographical presence throughout my work is the tilde (~). Besides resembling an ocean current and containing the word “tide” in its body, the tilde has many intriguing uses. In languages, the tilde is used to indicate a change of pronunciation. As you know, I use many different kinds of discourse in my work (historical, political, personal, etc) and the tilde is meant to indicate a shift in the discursive poetic frame. In mathematics, the tilde is used to show equivalence (i.e. x~y). Throughout my work, I want to show that personal or familial narratives have an equivalent importance to official historical and political discourses.

Cartographic representations of the Pacific Ocean developed in Europe at the end of the 15th century, when the Americas were incorporated into maps: the Pacific became a wide empty space separating Asia and America. In European world maps, Europe is placed at the center and “Oceania” is divided into two opposite halves on the margins. As imperialism progressed, every new voyage incorporated new data into new maps.

As I mention in the preface to my first book, the invisibility of Guam on many maps—whether actual maps or the maps of history—has always haunted me. One hope for my poetry is to enact an emerging map of “Guam” both as a place and as a signifier.

The “actual maps” in my first book are, to me, both visual poems and illustrations of the rest of the work. In my imagination, they function in two ways: first, they center “Guam,” a locating signifier often omitted from many maps. Second, the maps are meant to provide a counterpoint to the actual stories that are told throughout the book. While maps can locate, chart, and represent (and through this representation tell an abstracted story), they never show us the human voices of a place. I place this abstract, aerial view of “Guam” alongside the more embodied and rooted portraits of place and people.

“Song maps” refer to the songs, chants, and oral stories that were created to help seafarers navigate oceanic and archipelagic spaces. Pacific navigational techniques are often understood as a “visual literacy,” in the sense that a navigator has to be able to “read” the natural world in order to make safe landfall. The key features include reading the stars, ocean efflorescence, wave currents, and fish and bird migrations.

Scholars and navigators describe this technique as “moving islands” because in these songs, the canoe is conceptualized as remaining still, while the stars, islands, birds, fish, and waves all move in concert. Islands not only move, but islands also expand and contract. For example, if you see an offshore bird associated with a certain island, then you know that island is nearby (thus, it has figuratively, expanded).

With this in mind, I imagine that poems are song maps of my own journey to find Guam across historical and diasporic distances. I imagine the reader is in a still canoe, reading the songs in order to navigate the archipelago of memory and story. In this way, books and words become moving islands, expanding and contracting, inhaling and exhaling. 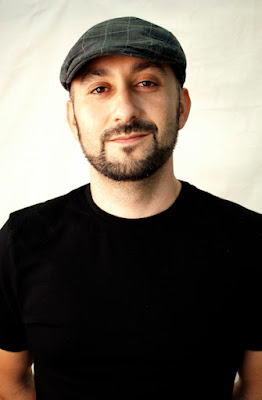 Craig Santos Perez is a native Chamorro from the Pacific Island of Guam. He is the author of three books, most recently from unincorporated territory [guma’], which received an American Book Award 2015. He is an associate professor in the English department at the University of Hawaiʻi, Mānoa. You can find him on Facebook, Twitter and here: www.craigsantosperez.com.
Posted by rob mclennan at 2:30 PM