Against Revision
Susan M. Schultz
"What is the longest it's taken you to write a poem?" (Tom Gammarino)

—Hawai'i Book and Music Festival Q&A
a. To look or read carefully over (written or printed matter), with a view to improvement or correction; to improve or alter (text) as a result of examination or re-examination. Also intr.with object implied.
b. To examine or re-examine (something, esp. a law, code, plan, or the like) for the purpose of improvement or amendment; to alter so as to make more efficient, apposite, or effective.
—Oxford English Dictionary

This exchange between Tom and Tim was the second such that I heard during the Book & Music Festival this Spring. The first, at a Bamboo Ridge panel, featured writers praising revision as the most important part of the writing process. I had begun to get ornery, so I spoke up during the Tinfish event, defending (my own) lack of revision. Tim's remark is truer, perhaps, insofar as it takes a lifetime to write any of our lines of poetry and prose.

Now, this isn't to say I never revise; when I write an essay I approach, avoid, return, and rewrite often. When I write a poem, I intervene, adjust, erase, and then await the ending. If revision is a kind of thought, then it's not to be dismissed utterly. But when I write a poem, I want to inhabit the moment of writing the poem asthe poem. To revise is to alter, and what I want is the unalterable moment, insofar as such a thing exists. This is the fruit of my meditation practice, but also of my years of observing my mother in her Alzheimer's. Alzheimer's is a disease that cannot be revised, let alone cured. It is the nearly pure de-construction of a life. To revise one's record of that process of losing--memory, speech, the ability to walk and take care of oneself--is to suggest it can be altered. The person with Alzheimer's is being altered, but not revised. The writer, if anything, is being revised, but her words remain faithful to the process (or unraveling of), however horrible it seems.

And so I wrote what I saw into my blog. When I prepared the blog posts for publication as books, I did a lot of editing. Editing is certainly a part of revision, but less complete. As I noted when I was editing my manuscripts, grieving seems to be a form of editing, and vice versa. I took out what I thought was not of interest to potential readers. I fixed sentences so that they scanned better (yes, prose needs to scan, too). I tried for an absolute economy of thought and feeling. But I did not ever add anything to the blog posts. Nor did I re-arrange their elements. To add or re-arrange would have been to suggest that alteration was possible, that the moment was not complete in and of itself. To add would have been to create a narrative (probably), one that works toward making sense. What I wanted to do was to record non-sense, not to make a false front.

In the memory cards that have preceded and followed the two books on Alzheimer's I've tried to be true to the process of making sense of the world, without fixing it in place. Hence, each day I write an entry is a day in which I arrive at--or stumble onto--meaning. Meaning is not edifice but mandala, or sand castle. To revise is to hold onto meaning, try to make it permanent, accessible to others as container not as hourglass.

John Ashbery says that he learned to revise as he wrote. Write long enough and you know what moves to make (which is why I still encourage my young poets to revise), which will work and which not. You know which serves to spin and which to hit flat. Which balls to hit to right and which to left field. When to dunk and when to lay-up. How to change key at the right moment to keep the improvisation conversational, rather than petroglyphic (though the unreadability of the petroglyph re-introduces interpretation as a kind of improv into the equation).

So yes, on the level of the sentence, you revise, even if the computer allows you to erase the memory of those shifts and tacks across the page. The ability to move back and forth in a document on the computer means a constant forgetting exists at the center of the memory cards I write. That's part of it, perhaps what joins my obsession with memory with my obsession about forgetting. To revise inside the poem/meditation/memory card, however, is not to alter the moment, but usually to replace it with another one, more apt for the occasion (and its quick flickering away). It is not to create a "good poem," though one hopes they're good enough, like many mothers. It is to make sure that the record of the moment works. Not a question of efficiency, but of haphazard stumbling into a meaning that will cohere, even as it's let go. The shifting ground of questions and answers, of difficulties and temporary solutions. Burke's situation strategy without a clear situation or strategy.

But more important to me is the sentence I wrote just up the page from here: "The writer . . . is being revised." That old visionary company of love might have tanked in the 19th century, along with the sublime ambitions of poetry. But a re-visionary company comes after Objectivism (in a poetic sense) and after disappointment, brutality, and age in the "real life" sense. When I write, I do not re-shape the world under the tremendous power of my pixellated thoughts; rather, I am re-shaped by it. As my experiences wear away at my expectations and ambitions and desire to alter the text that is my life, my writing records the process. And this may be why I find myself writing more and more lately. As my ambition to write poems wears down, my delight in recording the process of being lived (if I can put it that way) increases. Robert Frost's adage about form, that without it you're playing tennis without a net, transposes for me into a sense that without writing my life would have no form. No net to catch me. I can mend a net, but I cannot re-vise it. It alters me. Where alteration finds.

this essay originally appeared on the author's blog 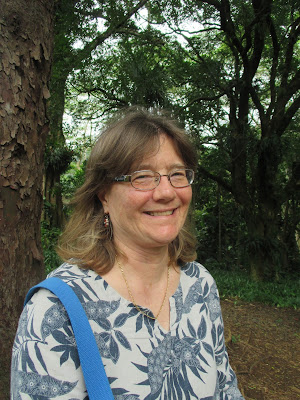 Susan M. Schultz is author of several books of poetry and poetic prose, most recently Memory Cards: Thomas Traherne Series (Talisman), "She's Welcome to Her Disease": Dementia Blog, Vol 2 and Dementia Blog (both form Singing Horse Press), and volumes of memory cards from Potes & Poets, Singing Horse and Vagabond (Australia). She founded Tinfish Press in 1995, publishing experimental poetry from the Pacific region. She blogs, and she cheers for the St. Louis Cardinals baseball team from her home in Kāne'ohe, Hawai'i.