Brains that call on their corresponding body parts to write are odd phenomena. People with brains of this nature probably already know what I’m talking about. The writers I know, more often than not, have been writing creatively in some form since they were children – since they learned how to read and write. I remember one of my first poems expressing a grief much more real than the death of a goldfish probably merited. I think the first line was “suddenly all memories float to the top”. Strangely, that sums up my experience of writing. Memories, feelings, words float to the top of my brain, and I have to tap them out. Sometimes it is one niggling feeling that I don’t understand but I know if I write it out, it will go somewhere – maybe not toward a resolution but it will move, somewhere.

Writing is a criss-cross urge between brain and hands, something I can feel on my tongue, words I can imagine as objects inside me. It is not simply thoughts – it is the process of burrowing into and expressing the thought behind the thought. It won’t always make sense but it will float to the top.

And when I’m not writing, do I stop being a writer?

No. Sometimes I feel even more like a poet when I haven’t written for a while, or when I notice a thing or a feeling that I know will come back to a poem, maybe not for months, but I have an assurance it will reappear. I don’t really take notes. I remember things that I think will be of significance, and when I wake in the middle of the night with a “genius” idea I don’t remember in the morning, I shrug it off and figure it will return, or it won’t, and so what anyway. Not writing can be as important to me as writing. I don’t want to document every nonsense thought or idea that I have. I don’t want reams of notebooks with indecipherable scribbles. I write that stuff down when I am actually ready to write. I don’t take notes on the contents of my own brain. I figure my brain will do that for itself.

Sometimes I not write so I can spend an extra few hours with pals or so I can extend my weekend or have another drink. I write more when I am happy than when I’m sad. Sometimes I learn more about myself and my writing but not doing it, by having experiences in real time and being in the moment.

All memories float to the top. If they’re good enough, they will rise up and I will write them down when they are ready to be a poem, when I am ready to be poet. I don’t put my writing in a drawer. I leave it in my brain – I find that prevents a cluttered home.

Today, there is ice for the first time this year. Layered on the cars outside my window. As I pass them on my bus journey home, I know I will sit with my computer for a bit when I get in. I know because the ice brings me to former lives in other cities with old friends. From the frozen face of the Mississippi, to the icicles on the staircases in Montreal, to the PATH of downtown Toronto. Writing lets me live in my world of impermanence. It keeps Mont Royal in my bones, Drawn & Quarterly in my heart, and 43 Cecil in my dreams. 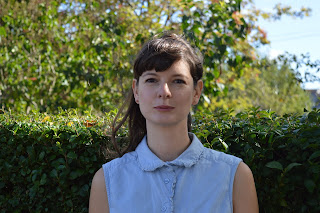 Julie Morrissy is a poet from Dublin currently living in her home city after spending a number of years living in Canada and the USA. In 2015 she was shortlisted for the Melita Hume Poetry Prize in the UK, and selected for the Poetry Ireland Introductions Series. Her work has published widely in Ireland, the UK, and Canada. Morrissy has performed readings at the Strokestown International Poetry Festival, the International Literature Festival Dublin, and on national radio. Her debut poetry pamphlet I Am Where is published by Eyewear Press in the UK.
Posted by rob mclennan at 1:30 PM

Email ThisBlogThis!Share to TwitterShare to FacebookShare to Pinterest
Labels: Julie Morrissy, On writing

Another Morrissey makes a name for themselves!