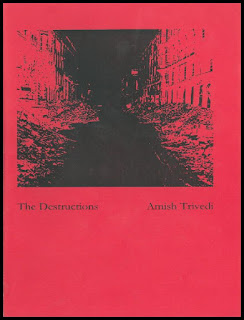 It seems paradoxical to describe Amish Trivedi’s The Destructions as both sharp and blunt. Scenes of visual memory flash out from a vague, romantic crisis. Using brevity to skirt what reads like a complicated relationship, these minimal arrangements isolate precise emotions at the expense of any greater context. In some cases this paradox translates into original perspectives of universal themes. In other cases it mystifies.

I stepped in
a flood
for you:
another
immolation

decided to be
a cherished sacrifice
in this moment


And yet other instances feel wholly, well, destructive, the loss of agency coupled with heartbreak:

In another set
of moments,
in silence
pretending
this schism

is burnt and
delusional and
digestive and


These groupings may feel rudimentary — like semantics of what it means to be selfless — but Trivedi’s motifs reinforce them: poems that suggest sensual giving are loaded with water imagery whereas poems focused on time denote a wasting away. The “soggy plastic / bags run over / in the parking lot” set the scene for “a pair of / wet excited thighs” in “Destruction (4th time around)”. By contrast, “95th Destruction” confesses: “I’ve been here / four hours / lying on / the ground / pretending to / laugh or / be dying.” The passing of time amid a physical coma creates slow-boil tension.

While it’s clear that my imposed groupings hinge on a break-up — its friction and fatalism are as distinguishable as water and oil — that traumatic separation-point is tough to pinpoint. As such, The Destructions nixes an obvious narrative for a mixed chronology, fitting these poems together like splintered glass. The collection’s a bit of a dead bouquet, in that respect. But for readers coping with their own turmoil, Trivedi’s verse may thread a worthy catharsis.