Whenever I hear a writer asked about their process I’m reminded of Dennis Miller, who once wrote something like, “The two things I care least about in this world are other people’s dreams and other people’s orgasms.” Sucks to be his wife, I guess. I don’t care about other people’s dreams either; I mean their involuntary occasions of the mind not their aspirations. I like aspirations. But I don’t care about other people’s writing processes. I don’t mean to be dismissive of other writers. I’m sure people who say they get up at 7am, write 2000 words, walk the dog, read some Dostoevsky, write another 2000 words, then don’t watch TV are comfortable in their lies. I’m sure they’re nice people on the inside. It’s just that writing is so personal, and contextual, that to share a process as if it was a universality is folly. To me, anyway.
I suppose I could tell you what I don’t think should be part of your writing process, though that would seem like a long list. Off the top of my head, and for brevity’s sake, I’d suggest to avoid:
·         Posting on social media that you received a grant
·         Sharing your daily word count
·         Using the #amwriting hashtag
·         Listening to other writers’ advice
But, of course, if any of those things work for you, aces. Except the grant thing. Gloating about getting a Canada Council grant is like bragging to the cashier about your scratch-and-win skills after a successful $3 lottery effort.
There are a few things that worked for me. Drinking did, until it didn’t. Smoking did, until it didn’t. Being unhappy did, until it didn’t. Love works, until it doesn’t. Living in Wakefield worked well for my last book, but I live in Amherst, Massachusetts now and that’s working fine too. I always wear shoes when I write. I drink tea as opposed to coffee. I like being in a crowded room where I don’t know anyone. Thesauri are helpful. Dictionaries are overrated. Never underestimate the literary acumen of a good bath.
But, as with the above, my writing process is about avoiding bad habits. But, so is my eating process. And my loving process. And my driving process. And my… you get it.
There are certain things that have greatly helped my process. Good editors are invaluable. Someone you can email a text to and get honest, quick feedback from. Deadlines are helpful. When something needs to be done, the motivation tends to manifest itself. Money. Money is good. I rarely write as well as I do when there’s money at stake. My wife recently bought some houseplants, and I like writing around them. Come to think of it, a wife is good too. Nothing accelerates and informs my process like 5’4” Turkish-Canadian woman yelling at me.
If writing processes could be easily explained, or transferred, or marketed, then there would be no need for university creative writing programs, and then where would all the writers find income? Which reminds me: Income is good. Get one of those.
My process comes and goes. It works and it doesn’t. I like it though. I like that it’s fluid, and that I don’t feel beholden to it. I don’t owe it anything. A writing process is an open marriage. And as anyone who has ever been in an open marriage will tell you: Don’t brag about your Canada Council grants. 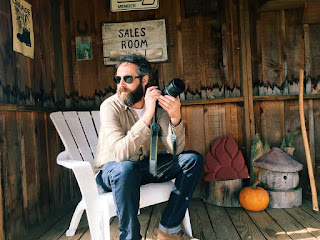 Mike Spry has written for numerous publications including The Toronto Star, The National Post, MTV, and TSN. He is the author of JACK, Distillery Songs, and Bourbon & Eventide and has been shortlisted for the A.M. Klein Prize and ReLit Award, and nominated for the Journey Prize. He lives in Amherst, MA. www.mikespry.com

Email ThisBlogThis!Share to TwitterShare to FacebookShare to Pinterest
Labels: Mike Spry, On writing

Mike, you speak for all of us nutty writers. Sometimes I don't know if I'm still writing the story started two hours ago; this be why 12:30 .m. + not wise to compose. Your comments are like lightning: one day you'll have a hit. Best regards, Ron