Every morning before breakfast, I descend two half-flights of stairs to one of those venerable pine secretaries with a folding top which you sometimes see at auctions.
There, on a rickety cane-seated chair, I jot in a spiral notebook, using blue pencils with smudge-proof erasers. A stylus and clay tablet would do as well. I write on one side of a page because I like to return to old notebooks and cull through them. When I go back to them many months later, I want those tomes legible.

The desk is a hand-me-down. My mother used it as the platform for her letter-writing campaigns of the Fifties and Sixties. Often coming home from school, I would hear her Smith-Corona clacking away in the study off her bedroom. The fact that we lived on a decommissioned farmstead six miles from the nearest town may have nourished her need to write to The New York Times or Commonweal on issues of utmost importance. Yet I think if we had stayed in southern Connecticut rather than decamp to northern Vermont in 1960, she would still have found time to correspond with a grab-bag of different people.

Sitting at the same desk, I record thoughts about a book I’ve been reading, scraps of dreams, or observations of clouds, and by that, I mean, what weather front is sweeping towards me across the spine of Gatineau Park. Living on a ridge above the Alonzo Wright Bridge not far from Cantley, Quebec, I find we get our share of blustery hill country days. With snow whipping against two transom windows to my left, I suppose that I hope to find myself riffing on a subject I won’t know I’m writing about till I’m about three sentences into it.

This business of moving into unknown subject matter doesn’t happen till I’ve exhausted the more obvious journaling subjects. Once the dream is recorded, the cold snap mentioned, the passing of yet another poet I’ve revered for thirty years—Galway Kinnell comes to mind—I may veer off into a persona. How else to try on the orotund style of an old coot issuing biblical-sounding warnings?

Writing even for a couple of paragraphs within a persona—let’s call him Herbert Knopscotch—makes for a surprising break from the conscious filtering voice that kicks in when I start my day. Seeing things from Herbert’s point of view—okay, he’s a bit of a finger-waving milksop who wears argyle socks and sweater vests over button-down shirts but nonetheless—his perspective breaks the monotony of talking about my poor night’s sleep. Why? Well, beyond the obvious fact that I don’t have to be responsible for everything he says, there’s the latitude of exploring a curious personality. It turns out Herb is more complex than the advice-giving Rotarian boob I had pegged him to be.
He sometimes does little variations on Lear’s Fool, tossing up admonitory gems of introspection I wouldn’t otherwise hear.

My efforts to get out of the way of myself may lead to a decent sentence or two after three pages of writing. This is enough to cheer me. (I ought to emphasize here the physical act of writing longhand which I don’t do enough of. It’s a base-touching thing with the small muscles of the hand and lower arm, a tonic before returning to a keyboard at a separate desk in the same room after breakfast.)

Twenty minutes later, I’m upstairs washing dishes, starting a load of laundry, and driving my daughter to school. By ten o’clock, I’m back down cellar looking at whatever drafts are under review. A rich writing period is something I have to build up to over weeks and months. I am always starting from scratch as a complete ignoramus.

If I find myself with three or four poems on the go, pieces that I can leapfrog back and forth between while revising some old sow’s ear of a poem I had thought worthless, then I consider myself lucky. That is not the usual drill. The quotidian is stumbling, cleaning gutters, cording wood, and reading favorite authors, which I suppose are all metaphors for having nothing “hot” on the go.

A routine that amounts to twenty minutes in the morning, then three hours during the day, appears to be enough. And some of that three-hour block may be put into a book review, or culling through old drafts, or looking at someone else’s work. Peeks at another author’s poems-in-progress are a privilege. They are what I’d call fruitful procrastination.

Back in the days when I used to unload airplanes, it would not have occurred to me to author a piece about writing. I wrote between flights at a card table in the locker room, or I would write at the car dealership when my ancient Datsun was being patched together, which was far too much of the time, or in the comfortable shack I rented for ten years above the North river in Piedmont, Quebec. It was an odd life, socially speaking, in that I was one of a handful of Anglos in an all-francophone workforce. I learned French quickly in order to understand the jokes. In addition to being an outsider, I had almost no weekends off, so it was difficult to nurture friendships with people beyond the airport world. However my afternoon shift at Mirabel Airport meant that I had my morning clear-headedness to devote to writing.

With hindsight, I see that I’ve been lucky in this and other respects. My day job didn’t grind me down to the point where I could only write on days off, and since taking early retirement in 2003, I’ve had eleven years to pursue this crazy involvement with seeing just where a sentence may lead me. The cellar is really not a bad place for a writer. Nobody expects anything from you in the way that nobody expects anything from a woodchuck during the winter months but to lend his or her body heat to the burrow. And if you are in a quiet period, or experiencing a series of bottlenecks with your work, as I often do, then life in its varied richness can be counted on to jerk you around in such a way as to make things interesting way again. 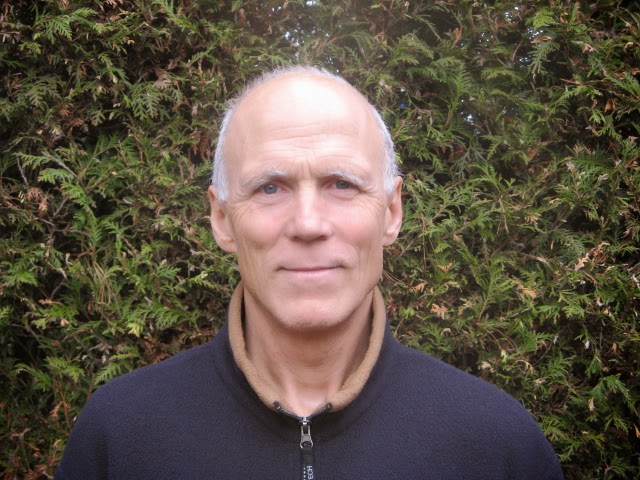 Peter Richardson has published four collections of poetry, the most recent of which, Bit Parts for Fools, was a finalist for the 2014 Archibald Lampman Award. An earlier collection, Sympathyfor the Couriers, won the 2008 QWF’s A.M. Klein Award. His poems have appeared in The Malahat Review, The Fiddlehead, Poetry Magazine (Chicago) and Poetry Ireland Review among others. He lives in Gatineau, Quebec.
Posted by rob mclennan at 9:46 AM

Email ThisBlogThis!Share to TwitterShare to FacebookShare to Pinterest
Labels: On writing, Peter Richardson

Wonderful to see thoughtful comments from this superb poet.