“Bright realms of violence”: ON THE POETIC
Catherine Owen

From Peter Norman # 39:
“It’s been my privilege and joy to work with a superb editor (and literary hero of mine), Stuart Ross. And thanks to that process, I developed what’s become my current focus while self-editing: weeding out the overtly poetic. Sometimes Stuart will flag a passage and say something like, “This isn’t working—it looks like you made this word choice because it ‘sounds poetic’” Not only is he right, but—to my horror—that mannered turn of phrase has been invisible to me! A blind spot, revealed. I’ve internalized some of the clichés of contemporary poetry to the point that they simply spew out of me, much as a lifelong executive might spout phrases like “core values” and “going forward” without realizing how corporate she sounds. So I’ve been trying to identify my go-to “poeticisms” and excise them. Like writing to a set form, this can be a fruitful restriction.”

When I read this piece in the ottawa poetry newsletter, it immediately irked. All for excising “go-to” clichés, tired phrasings, stereotypes, idiom and pat laxness (As Donald Hall recalls in The Weather for Poetry: “The manifestoes of the Imagist Movement praised the particular over the abstract, the local over the infinite; and we were enjoined not to speak of ‘dim lands of peace’”), I wondered why these essential eradications were all falling under the umbrella of the “poetic.” Such a use of the term seems imprecise, possibly even dangerous. Here is Wikipedia’s definition of the poetic:

po·et·ic
adjective
of, relating to, or used in poetry.
"the muse is a poetic convention"
written in verse rather than prose.
"a poetic drama"
having an imaginative or sensitively emotional style of expression.

Verse not prose. CHECK. Imagination. Sensitivity. CHECK. I am a poet. I write poetically. To me this has always meant that my way of using the language can be marked by simile, metaphor, image, lexical texture and resonance and certain quirky ways of combining all of the above so that what emerges may sound, indeed, poetic, ie. not perhaps the common mode in which one speaks in everyday transactions, in journalistic prose or in other typified engines of discourse. When I revise my poems, if I find that some symbolic or aural turn stands out in a “sore-thumbed” kind of way, sticks out non-organically, as if I had pressured it too much to rear into existence instead of allowing the flow of the poem to determine what emerged, then I will axe it. But this is not because such an error was too “poetic” – no it was too “me.”
Obviously, the word “poetic” has been tainted. It has the aura of something precious, contrived, frilly. Or it’s just plain confusing to most what it means at all.

From ALL IN THE FAMILY:

Gloria to Edith: Ma, that’s very poetic
Archie: What the hell’s poetic about it, I didn’t hear nothing rhyme!

The funny thing is, I actually have a poem by Peter Norman on my fridge. I cut it out of one of the LRC’s I subscribe to precisely because of its poetic values. It’s called “Growth” and not only does it contain such poeticisms as the use of the pathetic fallacy in the notion that “Flora violates nourishing soil” or that a root can be “rogue” or a “solo blossom” buck a “fragile plan” but it’s extremely poetic in its uses of sound (the reason why I clipped it out). Roots extrude, or “blunder deeper”. Boots imprint and most deliciously, hover “on pockets of nil.” As far as I’m concerned, though of course there are always bad poets who make the poetic icky for us, a good poet can ride the poetic right into its aural and lexical stable, containing it in the ear and blood for the reader in a way that a writer afraid of or determinedly eschewing the poetic, never will. 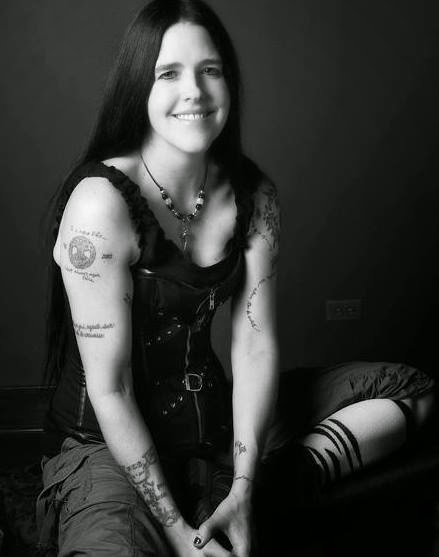 Catherine Owen lives in New Westminster, BC. She is the author of ten collections of poetry, among them Trobairitz (Anvil Press 2012), Seeing Lessons (Wolsak & Wynn 2010) and Frenzy (Anvil Press 2009). Her poems are included in several recent anthologies such as Forcefield: 77 Women Poets of BC (Mothertongue Press, 2013). Her collection of memoirs and essays is called Catalysts: confrontations with the muse (W & W, 2012).

Frenzy won the Alberta Book Prize and other collections have been nominated for the BC Book Prize, the Re-lit, the CBC Prize, & the George Ryga Award. Owen edits, tutors, plays metal bass, works on the TV show, Arrow, collaborates on multi-media exhibits and co-runs Above & Beyond chapbook productions. Her book of elegies, Designated Mourner has just been released by ECW Press (2014) and a chapbook called Rivulets is out from Alfred Gustav Press. In 2015, Wolsak & Wynn will publish her compendium on the practices of writing called The Other 23 and a Half Hours Or Everything You Wanted to Know That Your MFA Didn’t Teach You.

This post is absolutely right: my word choice was sloppy. (What an embarrassing context in which to have been sloppy with language!) When I said “poetic” I was indeed going after something like “contrived, precious, frilly,” with an emphasis on “contrived,” especially unconsciously contrived. I was thinking of those turns of phrase or tricks of language that I absorb from poetry without giving them any thought, slipping them in only out of a vague sense that they make a poem feel more “like a poem.”

As Owen points out, a judicious edit will weed out such contrivances because they are inorganic. So (and forgive the sloppy language here; I’m typing as I think) there’s “good poetic” (using the toolbox of poetry to bring out the best in a poem) vs. “bad poetic” (inflicting on a poem clichés or non-inherent frills that are meant to inflate its cred as a poem but in fact drag it into vogueish conformity). I agree that “too me” is one grounds for excision; another, and perhaps the one I was worried about, is “too trendy.” (I’m talking long-term trends, multi-multi-decade trends.)

Anyway, this is a great response and a welcome tonic to my original sloppiness. I admire plainspoken poetry when its plainspokenness is deceptive, is actually a vehicle for the poetic. And conversely admire the hell out of some work that wears its “poetic-ness” (as distinct from empty flourishes or mindlessly received aesthetics) on the outside.