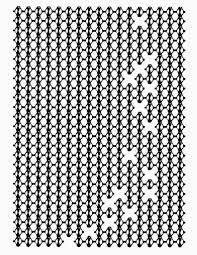 Every time I flip through Eric Schmaltz’s debut chapbook, I remind myself not to review it. Clearly, this impulse is acting out of self-preservation. I’m borderline illiterate when it comes to the intentions and disciplines of visual poetry but that alone cannot discount the number of times I’ve leafed through MITSUMI ELEC. CO. LTD.: keyboard poems. So, here goes.

Despite the retro-futurist product information and disclaimer that are reprinted on the inside jacket, there’s something endearingly primitive about these keyboard poems. Although composed of symbols and shapes of rigid construction, their inevitably varied ink absorption gives Schmaltz’s stampings a humane texture. Take the cover image, for example, which ekes out a path through minuscule, modulated typeface to create a moving cascade as opposed to a flat grid.

If my description sounds akin to topography, there’s enough evidence on these pages to support it. Keystrokes spatially construct disorder – scenes that handily reimagine Microsoft’s warning of “undesired operations” – in conversation with images of pristine organization. Think the erratic busywork of bees and the diligent geometry of their nests, side by side. My perspective often embraces the bird’s eye view, looking from above at Schmaltz’s architecture and trail-markings. Visually leaping this divide brings to mind descriptors that nations tend to encamp on (civilized, developing), and how these terms attempt to fragment a singular worldview. Even without that runaway stream-of-conscious, I sense abandonment from both terrains: 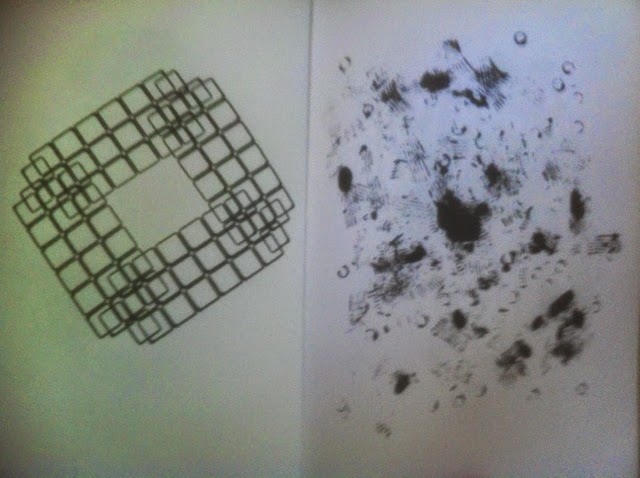 Aforementioned user text only furthers the case for a lost civilization, obscured within a hand-scrawled grid or visible in stacked windows that tower like condos over Toronto’s waterfront. Perhaps I’m meeting some of these keyboard poems more than halfway, seeing the below example’s words squeezed into a fist of clay and blotted by what looks like slabs of continent. Can you see the faint ink blemishes on the northern hemisphere, like rocky tundra? Maybe you can’t, as it’s entirely possible these vaguely post-apocalyptic signs of desertion reside with me alone. Still, the steady contrast between sterile geometric surveys and these grimier details beg a social commentary next to an aesthetic one. 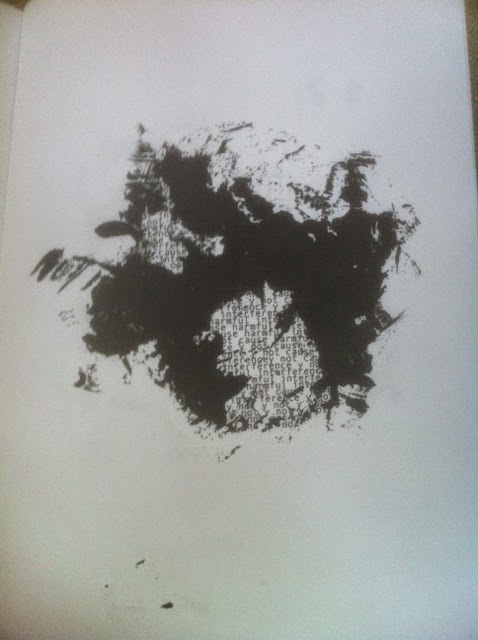 above/ground press has reproduced these black ink poems stark enough to capture rogue smudges that dab and destabilize from the outer limits of the frame. And although the saturated effect doesn’t lend a deeper sense of narrative, page by page, it does have a serendipitous effect on the chapbook’s sequence, as poems leave a discernible ghost image on the backside, often merging in complimentary ways: 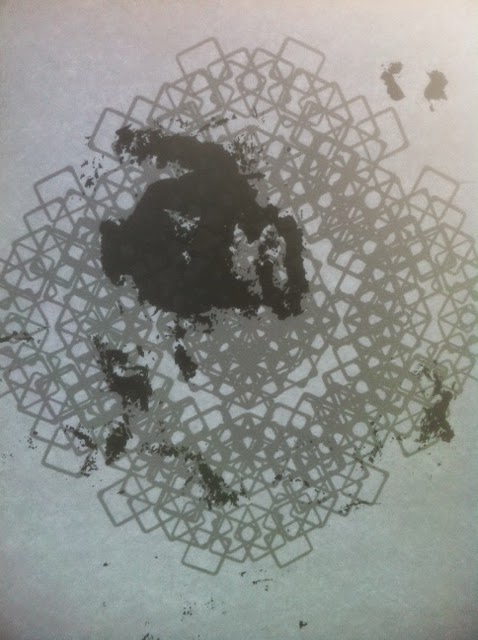 In constructing space, I suspect there’s a parallel between navigating visual poetry and jazz; how placement of concrete expression reverberates the channels of interplay around it. Alas, today I’ll stick to talking about only one art form I shouldn’t. Schmaltz’s poems toy with notions of structure and decay that are readily interpretable and, in some cases, quite frame-able.
Posted by Ryan Pratt at 6:37 AM