On Writing: Born of That Nothing
Beth Follett

It is not the captain declining to be saved
on the sinking ship, who may just want to ride his shame
out of sight. She is at the brink of never being hurt again
but pauses to say, All of us. Every blade of grass.
—Laura Fargas, “Kuan Yin”

Are you familiar with the terror in the night—it's been called Old Hag syndrome, or sleep paralysis— that uncanny hypnogogic event when one hears an intruder, usually a woman, speaking low in the darkened room, and one attempts to rise, to call out, but is unable to do so for the feeling of being held down, bolted to the bed. I have friends in Newfoundland who've repeatedly known The Hag. Artist Michael Pittman painted her, a painting I bought, a painting that gives those that view it the creeps. Two weeks ago The Hag came calling for me.
Yes, I was frightened, even, for half a minute, terrified. And absolutely, fully alive in that same half minute, alive to what Don McKay and others call wilderness, the thing we can never own. Of such infinite complexity is our living, and at times so utterly terrifying; yet deep in the folds of darker experience, craning toward what is mysterious, frightening and unnamable, language and consciousness will sometimes sharpen, fully desirous. What is happening? What is that?
I love this capacity of ours, to observe the ten thousand things of the sensual world in their strange fluctuation, to watch as things flicker, ever so lightly, reflected in that house of mirrors we call mind and language, to feel things' expression in that other funhouse we call the body. No matter our fear, no matter the cost, there is within us a complex craning out of semi-darkness, a complex groping for connection, for words.
Of course we can't attend to everything all the time, can many times lose touch with the words that are being almost constantly generated out of absence into presence, only to fall, unnoticed, once more into absence. And anyway, one needs to rest, to practice a kind of holy indifference to the generative world, to step away from time to time in order to actively empty the mind. But our groping—our listening for, finding and grappling with words—this I love, this is what moves me to write.
The sheer beauty of the enterprise moves me.
I was raised in feminism and stand opposed to most systems and constructions of patriarchy. Like George Orwell, in part I write because there is some lie I wish to expose. The socialized Ego generates patriarchy's lies ad nauseum, lies about Women, Men, Nature, Power and Love. It is important for me to distinguish the words formed out of the lies of patriarchy from the words out of the void, out of absence. "The void is not something created by patriarchy, or racism, or capitalism," wrote Adrienne Rich. "It will not fade away with any of them. It is part of every woman. “The dark core,” Virginia Woolf named it, writing of her mother. The dark core. It is beyond personality; beyond who loves us or hates us. . .The void is the creatrix, the matrix. It is not mere hollowness and anarchy. But in women it has been identified with lovelessness, barrenness, sterility. . . We are not supposed to go down into the darkness of the core. Yet, if we can risk it, the something born of that nothing is the beginning of our truth."
To have the courage to go down repeatedly into the darkness, listening: this is my writing practice, and in truth it has become, with age, my Way.

I do what Simon says.
But the voice, quick and muffled,
gives some orders
which are not Simon's.

Simon I try to please.
It is necessary, and right, too, but
there is the doubt if
Simon has said, or has not.

Did Simon say, Do that, or
did that come Simonless
from the quick voice, the soft
instruction? Perhaps a bad mistake.

If Simon has not said it,
what then? Jumbled together: Live. Die;
which was authentic Simon? Go. Come. 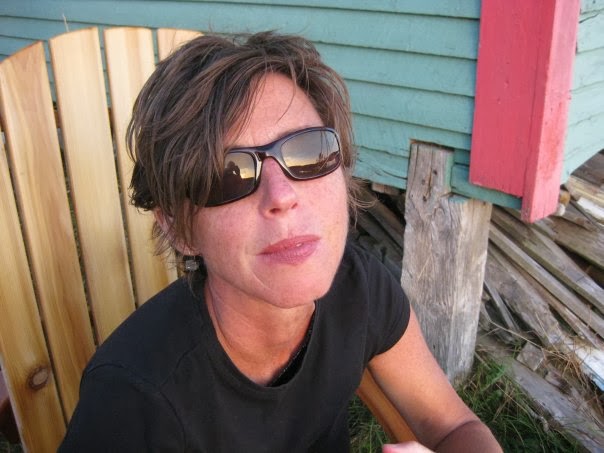 Beth Follett [photo credit: Stan Dragland] is the publisher, editor and all of Pedlar Press, acclaimed Canadian literary publishing house now located in St John's NL. Her own publications include Tell It Slant (Coach House Books, 2001), Bone Hinged (paperplates/espresso, 2010), YesNo (a Fieldnotes Chapbook, 2011)  and the forthcoming A Thinking Woman Sleeps With Monsters (Apt.9, 2014). Surely one day she will finish her novel-in-progress, thus far a nine-year labour of love.
Posted by rob mclennan at 9:02 AM

Email ThisBlogThis!Share to TwitterShare to FacebookShare to Pinterest
Labels: Beth Follett, On writing

I so enjoyed this piece of writing, and having encountered the hag, I know where Beth is coming from. Into my tenth year of a novel in progress also...this was a shot in the arm! Thanks Beth, for writing this.

the word of gord said...

I enjoyed this also Beth, fine writing indeed. Am familiar with the folklore around the old hag and sleep paralysis but have had no such encounters myself. Am intrigued at your conjunction of this encounter and your efforts against the enforced myths of the patriarchy and would be pleased to see you explore that further.