Ground Rules: the best of the second decade of above/ground press 2003-2013
Edited by rob mclennan
With an introduction by Gil McElroy

Beyond its implicit roundness, skipping forward or backward in clean slices that gleam with impunity, what’s in a decade? What makes it a respectable interval, a begging glance? Does it detect a pillow of separation? Or a panic-stricken jolt? What did you do in the last decade? Perhaps our reverence to the decade owes to the limitations of memory; that as the years gather and so much blood and sweat get mothballed, nobody can rightly gauge the potential of ten years without its anniversary, marked by cultural clocks in fluorescent detail. Oftentimes, there’s just too much to remember beyond the face of it. 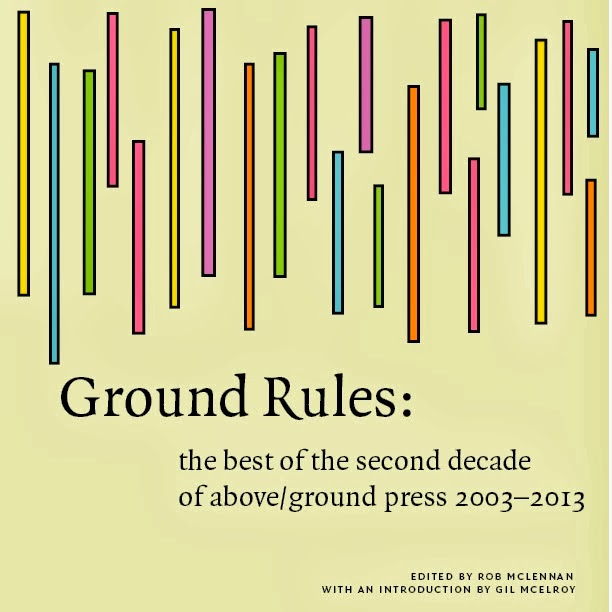 So how does one approach a decade (the second, to be precise) of above/ground press, one of Canada’s most fertile and industrious publishers? Gil McElroy’s introduction, while hazardous for someone confused by the very mention of calculus, arrives at a sort-of chaos theory, interpreting poetics – through Louis Zukofsky’s “A” – as Music and Speech captured in a relationship of exhausting potential. As the two forms zigzag from opposite comfort zones of traditional rhythm and lyricism, McElroy locates above/ground press as reliable coordinates by which fresh collisions consistently occur. Ten years, in McElroy’s view, isn’t so much a measurement of time (the how-longs and how-manys) as it is a matter of choice and execution. It’s about staying vital: the enduring impact of and interest in above/ground press acts as its seal, its legacy.

Fittingly, Ground Rules: the best of the second decade of above/ground press 2003-2013 begins with an impulsive foot forward, sharing visual poems by derek beaulieu and strong, solo poems highlighted by Stephanie Bolster’s instantly re-readable “Night Zoo”. With its playful sense of variety firmly intact, the compendium settles into a showcase of chapbooks, the medium above/ground champions at a prolific, damn-near-obsessive pace. Now as a relative newcomer, having followed only the last handful of the press’ twenty years in business (and thereby missing Groundswell), I was quick to get excited about the selection process. Which titles will make the cut? And had Ground Rules been a perfunctory slap on the back, or even some cut-and-paste of personal favourites, much of that anticipation would’ve reconciled itself on the Table of Contents. Instead, editor and publisher rob mclennan has used this occasion of collecting previously published work to reframe and carry anew the conversation about poetics.

Organized like a trade pamphlet, Sharon Harris’ More Fun With ‘Pataphysics gazes upon the poet from the stance of a curious outsider and offers imaginative answers that reflect the futility of assigning too much structure to craft.

“8. If I place a poem and its translation across from each other, and I stand between them, can I
see my reflection stretching away into infinity?

In theory, you could get an infinite number of reflections in the poems, but only if the poem
was perfectly translated and you stood there forever."

"15. Where’s the best place to sit at a poetry reading?

Harris’ light, irreverent jabs at the somber weight heaped on poets from the mainstream form one of the many voices interested in the function of art itself. A more clinical tactic surfaces in Lisa Samuels’ The Museum of Perception, a chapbook of poems that look the part – and, to some extent, serve the purpose – of text panels one would find in a gallery but overlap their descriptions with a poetic voice that obfuscates the imagined view. Sometimes Samuels probes the limitations of perception, other times she warns against accepting directives for how a given thing should be perceived. The grey area between forms and intentions feels oppressive, complicated but mesmerizing nevertheless. Then there’s Natalie Simpson’s Writing the Writing, a clear-headed mediator between the aforementioned cheeky and theory-drenched examples, which through clever wordplay pinpoints the transient ways a person can net and manipulate everyday language for something therapeutic, something unusual, something new.  Each of these chapbooks begs the reader: what is this practice and why does it happen? What are we, as readers and writers, chasing?

If that’s the knottiest theme unifying Ground Rules, it’s interspersed with chapbooks that fortify the shoe-gazing, near-existential question by looking outward and showing no concern for it.  In her conversational free-verse poem My City is Ancient and Famous, Julia Williams’ preoccupation with living spaces and the rites of moving collide with the maintenance, politics and market-worth that often keep people stationary. Eric Folsom’s Northeast Anti-ghazals alternately thrives by obeying a tailored structure and littering severed omissions for the reader to fill in.

Whatever lies frozen in the ice, a mitten or a Buick,
Suspended as though floating upside down in the sky.

The fiddle music over, so the priest went home
And saw the ghost of his father sitting on the bed.

Late in the season when the ice gets soft,
Some drunk tries to cross at night and disappears.

Most people worry about saying the wrong thing,
Think too long about the darkness beneath their feet.

She gave her daughter the red sweater and a key
To the safety deposit box down at the bank.

Something that shouldn’t have been there,
A car in the same spot for days, gathering tickets.”

“Slipping Away” dutifully showcases Folsom’s ominous tone and knack for loosely associated imagery, although it's worth noting the latter quality flexes just as convincingly in a nearby poem about the warmth of a young family’s morning routine ("Just Another Yuppie Raising Children"). Almost evaporated and yet equally unmovable is Rachel Zolf’s the naked & the nude, which in pockets on each page displays a sensual account in its minimal, elemental glory (stealthily citing the work of Bob Marley, Phyllis Webb, and Joni Mitchell in the process).

Alongside a wealth of titles I’d missed the first time around, Ground Rules exhibits reproductions that intuitively fill gaps in the library of authors I’ve grown to admire. The crumbling Santa Maria hotel in cuba A book exists in an historical and cultural nexus perfectly suited to Monty Reid’s inquisitive voice.

on the airport road
checking the papers

hard stabs of light
that doubt

who you are.
Oh yes

we are still
who the papers

A cloud of jellyfish
wash up

on the shore
at Santa Maria

where you found
a cheap hotel

built by the Russians
and used

as a love hotel
in their idyllic phase

and then abandoned
in the general

abandonment
that comes after

the idyllic phase.
The jellyfish tremble

in the small breeze
or is it resentment

since no one
will touch them

in spite of their beauty
and their arms

so many, so much
to let go of

can still
hurt you.

How they went
home disappointed

in love
and in concrete?”

The above excerpt offers a surface glimpse at the subjects Reid meshes – aging amid the rituals of dating, identity as culture and place, nature as pure or putrid – without letting their philosophical weight hamper the clarity of his tourist’s candor. Another eureka moment arrives with Helen Hajnoczky’s A history of button collecting, a shimmering exercise in prose poetry that takes inventory of the material, maternal and natural ephemera that instill memory.

Memory’s addictive traits form a paralyzing subtext to the whole but the above portion finds Hajnoczky’s nostalgia at an impasse, dwelling less in specific details than in temperatures – warm or cold. A history of button collecting remembers itself in revisions; the actual past increasingly fragmented, obscured. Catching minute impressions creates a more physical memorial in Cameron Anstee’s Frank St. but the act is pressurized all the same; our wordsmith scales the premises, recording every happenstance from a perch over downtown Ottawa but his proofs struggle to compete with the building’s scars. None of these poems bear any strain of the restlessness they recite – each effortlessly rooted in the quirks of an old apartment and the timeline of its resident couple – but Frank St. documents memory as an ongoing present, a unrequited limbo. Anstee’s couplets and stray lines tiptoe the left margin, never staking their subject as home with a capital H but sketching a safe haven for books, plants and cooperative hands. Earlier I mentioned chapbooks that interrogate their own bones but these recent examples (by Williams, Reid, Folsom et al.) tend to above/ground's duality by seeking new ruins, new worlds.

Readers will approach Ground Rules with varying degrees of familiarity; longtime above/ground subscribers might own all of these selections while casual fans should recognize at least a few. Given that my knowledge of the press’ output exists somewhere between these two camps, I’ve been in the enviable position of adding several authors to my must-pursue list, discovering older work by authors I already enjoy and revisiting some classics (by the likes of William Hawkins and Robert Kroetsch) that require no introduction from me. Even so, the bounty of Ground Rules doesn’t hinge on what you have or haven’t read yet. These entries probe, reflect, dance and thrash together, harnessing a friction that confounds as much as it compliments. It’s surprising that an anthology looking backwards should say something new but, then again, above/ground press has been releasing fresh poetry for twenty years now. We had a solid ten to see this coming.
Posted by Ryan Pratt at 7:03 PM