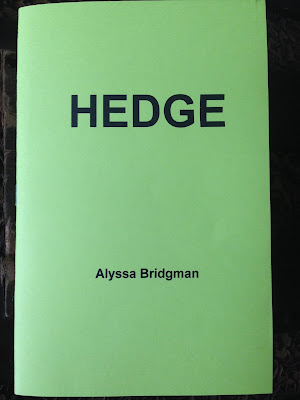 Although a quick flip to the colophon of Alyssa Bridgman’s HEDGE reveals the chapbook’s chief inquiry – a comparison between Trump’s border wall and “the eighteenth-century enclosure movement in Britain” – it doesn’t portend the scope of these poems. By deconstructing the ideology of boundaries and undressing them of political and historical biases, Bridgman enables the reader to interact with them objectively. Ironically enough, it’s seeing our privilege, attachment and complicity from this neutral viewpoint that organically reinforces the material’s political/historical bent.

“Unnatural Haikus” efficiently parses the coarse duality of borders: what’s kept in, what’s left out. If one side has gains, the other has losses. If one side feels safe, the other is to be feared. And big surprise – those who determine where borders belong also ensure that wealth pools on their side of the partition. This untitled piece outlines the pendulum swing in vague yet validating buzzwords: 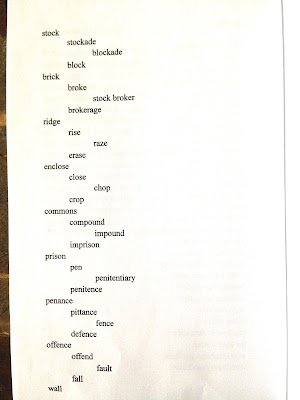 Though HEDGE admirably splits its focus between “hedge” and “fund” (even offering both terms a timeline of evolving definitions in the preface), the most compelling poems for me tread the imposed hedges of language. In “Mother” and “Between cracked words”, Bridgman sees language as a wall-like construct – a linear progression where thoughts and words accumulate like bricks. In the former poem, these constructs inform a family’s verbal and psychic sphere, wherein words guide children through both sturdy and faulty interactions. Bridgman masterfully evokes a sort-of Venn diagram in the mind of the reader, presenting the family’s boundary eroding when linked to outside language spheres.

That thought-provoking idea expands but struggles in the latter poem, as hedges of language and thought merge with the physical world. A disagreement gathers in bricks of blood and ink:


Delivered in five sections, “Between cracked words” guides the reader through an architecture of misunderstanding and weighs the culpability of adding another voice to the pile. It’s heady stuff and admirably tackled, though getting there requires maneuvering some clunky lines that double as exposition (“my flowing train of thoughts is speeding / out of control on riverbed-tracks headed for the ocean”). That's the challenge of relaying complex meaning while still writing effective verse – one risks coming off as either too abstract or hand-holding. Still, the payoff is totally worth it:

the barrier of deafness
we create with inattentive ears

listens only to our own voice
barricades ourselves in enclosure

where we hear the echoes
of our words bounce back

in the dark room
in a loss of foresight

we turn on ourselves
as the water rises

Borrowing “barrier of deafness” from Susan Howe, Bridgman’s poem gets surgically prophetic by its close. Yet there’s no preachiness or fear-mongering, and readers don’t have to study up on “the eighteenth-century enclosure movement in Britain” to enjoy it. Maybe it’s a sign of the times that HEDGE is political even without making explicitly political references, but its message about discourse should appeal to both sides.
Posted by Ryan Pratt at 6:20 PM